Whether in a negative role or as an army officer, a prince or a pauper, charismatic Raaj Kumar never failed to impress, making us fall in love with him a little bit more with every role.

Raaj Kumar’s name evokes in our minds several images — that of an arrogant aristocrat, a smart gangster, a gentle doctor, a poor farmer, an impressive defence or police officer or a drunk, debauched nawaab.

Clearly, whatever the role, Raaj Kumar, quite like his screen name, ruled, and it almost seems like poetic justice, therefore, that he opted for a screen name like Raaj Kumar — the prince!

Born Kulbhushan Pandit, Raaj Kumar stood out for his unique manner of acting and dialogue delivery which made iconic so many of his dialogues, urging us to remember him through those lines on his 23rd death anniversary.

Raaj Kumar was born in Baluchistan (now in Pakistan) in 1926 and worked as a sub-inspector with the Bombay Police, before entering the film industry in 1952 with Rangili. This was followed by some others that did not make much of a mark until 1957 — a year that proved lucky for him.

In 1957, Sohrab Modi’s Nausherwan-E-Adil featured Raaj Kumar as a prince. Songs like Bhool jaaye saare gham still remain a favourite for most music lovers. Mala Sinha, Raaj Kumar's costar in the film, would work again with him again in Mere Huzoor, Maryada and a few more. But it was as Shamu, the poor farmer in Mehboob Khan’s classic Mother India, that Raaj Kumar made a real impact on audiences. It was a short role as the husband of Radha (Nargis) who loses his hands and then leaves home to never come back. The helplessness and pain of the character were conveyed very effectively by Raaj Kumar, and the film went on to establish his as a serious actor. In another similar role, in Godaan (1963), based on Munshi Premchand's novel of the same name, Raaj Kumar essayed the role of Hori — a role that was reprised, many years later, for a television series by Pankaj Kapur.

It is remarkable that in an era of soft-looking heroes, especially in the 1960s, Raaj Kumar with his unconventional looks could capture the hearts of audiences.

Chocolate-box heroes, like Biswajeet, Joy Mukherjee, Shashi Kapoor and Rajendra Kumar, ruled the roost in those days. And it was also in these times that the rugged, stylish, swaggering Raaj Kumar made a niche for himself — never did one see him run around trees with his female leads. His strong persona came across equally strongly on screen and his roles spoke about the man he actually was — the eccentricities and idiosyncracies he sometimes showed in real life seeped into his performances.

This is not to say his 'tough look' made him unacceptable in romantic roles. From Heer Raanjha to Pakeezah, Hamraaz to Dil Apna Aur Preet Paraai, Waqt to Mere Huzoor — his controlled expression of finer feelings tell us of the vast range of his art. As Meena Kumari’s ailing husband in Dil Ek Mandir, as the romantic Raanjha to Heer in Chetan Anand’s poetic creation Heer Raanjha, as Dr Sushil who is in love with Karuna (Meena Kumari) in Dil Apna Aur Preet Paraai and as the loving elder brother in Waqt, Raaj Kumar convinces us that he could excel in emotional roles just as he could in the more intimidating ones.

In fact, in Waqt — which gave us one of his most memorable dialogues, "Jaani" — we see both sides of him as Raaja, a gangster associated with Chinoy Seth (Rehman) and an emotional man who deeply loves his family. And both dimensions are portrayed to perfection. His romantic scenes opposite Sadhana in this film are remembered as fondly as his crisp exchanges with Chinoy Seth. And his towering presence on screen was just the icing on the cake.

Thirty-two years after he worked with the great Dilip Kumar in Paigham, the two stalwarts were brought again together on the screen by director Subhash Ghai with Saudagar (1991) — a film that will always be seen for the coming together of the two legends, who reportedly spoke to each other only during the shots. Their efforts to out-do each other resulted in excellent performances. Raaj Kumar’s impeccable Urdu diction added greatly to his screen persona while his deep and resonant voice added an X factor. 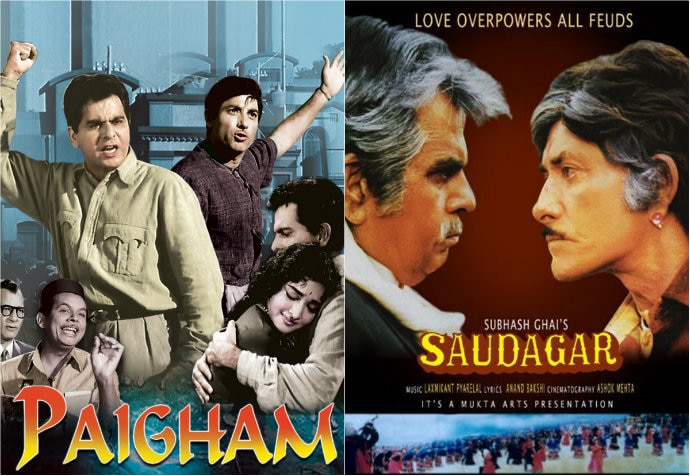 Clsh of the titans! Raaj Kumar and Dilip Kumar's efforts to out-do each other resulted in a cinematic treat for viewers. (Photo: Wikimedia Commons)

It was indeed tragic that towards the end of his life, he lost this magical voice due to throat cancer.

Whether in a negative role or that of an army officer (Hamraaz and Oonche Log) or an airforce officer (Hindustan Ki Kasam), a prince or a pauper, Raaj Kumar's versatility is unquestionable — never failing to impress, always making us fall in love with him.

So much so that his iconic dialogue, Jaani, became an endearing nickname for him.

I can imagine him saying, in his deep throaty voice, to all of us right now, “Jaani, Raaj Kumar kabhi mara nahin karte!”

Indeed. And we will always miss you, Jaani.

#Saudagar, #Neel kamal, #Death Anniversary, #Bollywood
The views and opinions expressed in this article are those of the authors and do not necessarily reflect the official policy or position of DailyO.in or the India Today Group. The writers are solely responsible for any claims arising out of the contents of this article.