He will forever be remembered for the classics such as Mere Mehboob and Sangam he gave us.

The month of July always brings with it memories of an actor whose career spanned four decades and included some very successful films that ran for as long as 25 weeks in theatres giving him the name "Jubilee Kumar". 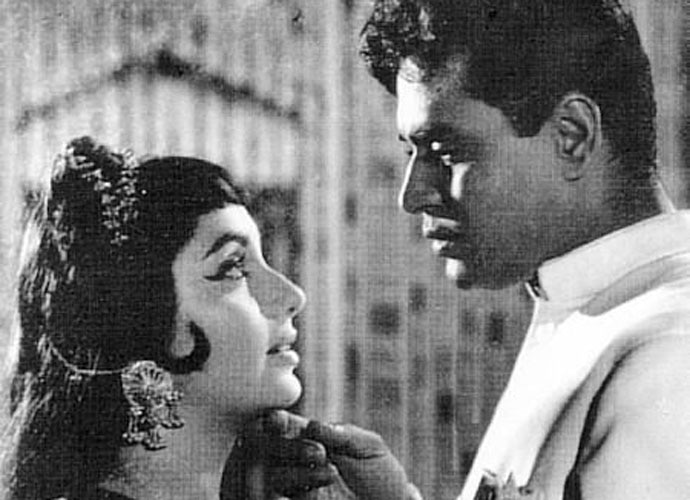 The actor was none other than Rajendra Kumar, who began his career with black and white films in the 1950s and gave hits one after another in the 1960s, believed to be the golden era of Hindi cinema.

There are three films that stand out in Kumar's career and can be labelled as true classics. These are Mere Mehboob (1963), Sangam (1964) and Arzoo (1965). In all three films, Rajendra Kumar gave memorable performances as Anwar Hussain Anwar, Gopal Verma and Dr Gopal, respectively.

Serious, suave, deep, low-profile and gentle — these words aptly describe his acting in these blockbusters. In Arzoo, however, he got the opportunity to display his comic prowess when he disguised himself as Hakim Sahib to hide his true identity from the father of the heroine (Sadhana's) played by Nasir (also called Nazir) Hussain. He evoked a lot of laughter in his avatar as the aged Hakim.

He had a wonderful comic timing. In Sangam and Mere Mehboob, the roles were, however, entirely serious and these established him as an actor who was in the same class as the great Dilip Kumar.

In Arzoo too, his role is that of a young doctor who breaks all connections with his lady love after his leg is amputated after a road accident. His pain and suffering is conveyed to the audience through his eyes and voice very beautifully. He does not speak much in the film and yet his expressions say it all. A mature actor indeed.

In Sangam, which released a year before Arzoo, we see him as the handsome Gopal Verma, who is a barrister and in love with the same girl (Radha, played by Vyjayanthimala) whom his dear friend Sundar (played by Raj Kapoor, who also directed the film) loves.

The girl loves Gopal but circumstances force her to marry Sundar. It is Gopal who has to sacrifice his love and even his life in the end. In this film, Kumar excelled himself and communicated the essence of romance and true love, stealing the hearts of the audience even though he was supposed to be the second lead. Rajendra Kumar's performance gave a special look to the picturisation of this immortal melody. Sangam took Rajendra Kumar to a level where he started giving one hit film after another. He never looked back. He was honoured with Padma Shri in the year 1969 at the age of 40. Kumar had a huge female fan following and it is said that unmarried women wished for a husband like him and married women prayed to be blessed with a son just like him.

Mere Mehboob saw him performing in many scenes with veteran actor Ashok Kumar and holding his own wonderfully well. With the extremely charming and pretty Sadhana, he made a magical romantic pair which was repeated in Arzoo.

Kumar played a young shayar — Anwar Hussain Anwar — so realistically that his fans began writing to him and asking whether he was actually a Muslim with the screen name Rajendra Kumar much like Dilip Kumar.

This says a lot about his dedication to acting and perfecting his roles. Earlier, his role as a young lawyer in BR Chopra's Kanoon had made people believe that he was actually a lawyer.

Kumar kept acting in character roles till the 1980s. He was also a producer and director. However, with the grand arrival of another RK, the first superstar of Indian cinema, in 1969 with Aradhana, the career of Rajendra Kumar and many other actors was adversely impacted.

Rajesh Khanna became synonymous with romance and fine acting. In fact, people could remember nothing but him. For some years, Kaka's magic ensured that others remained in the background.

However, by the time Rajesh Khanna made his debut, Rajendra Kumar had given such beautiful films to the audience that his name will always remain etched in the hearts of all who know the value of the golden era, its films, its actors, its stories, lyrics and music.

It was between 1959 and 1966 that he reached the peak of his career and acquired the name of Jubilee Kumar which will be his for the times to come.

Also read: Mumbai drowning: The buck stops with Shiv Sena. Why is it not in hot water yet?

#Bollywood, #Rajesh Khanna, #Mere mehboob, #Rajendra kumar
The views and opinions expressed in this article are those of the authors and do not necessarily reflect the official policy or position of DailyO.in or the India Today Group. The writers are solely responsible for any claims arising out of the contents of this article.