Mumbai drowning: The buck stops with Shiv Sena. Why is it not in hot water yet?

The party has ruled the BMC for decades, and Mumbai’s infrastructure has grown steadily worse.

Monsoon is not a surprise, even with our less-than-awesome weather prediction systems. It comes every year, in the same month. We all know it’s on its way, and thanks to the severity of summers, are counting days for it. 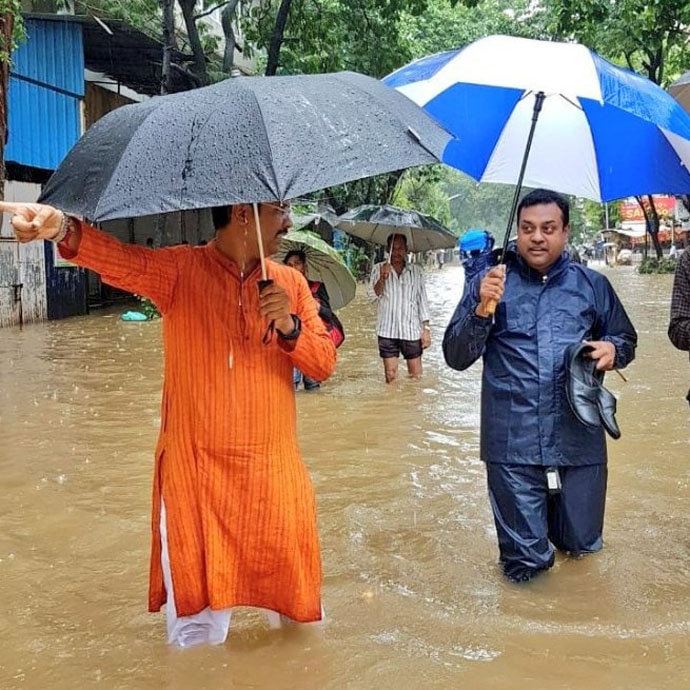 The great leveller: A wading Sambit Patra went viral on the Internet, for Mumbaikars, it is an annual ritual. Photo: Twitter

Yet, to at least one administrative body in the country, the rains seem to strike like a bolt from the blue, catching it absolutely unawares. The Brihanmumbai Municipal Corporation (BMC), the richest municipal body in India, responsible for the upkeep of the country’s financial nervecentre, manages to be blindsided by the monsoon year after year.

As Mumbai gasps and flounders yet another time — 38 people have died in the first month of monsoon — there is the usual uproar: outrage over the city’s abysmal infrastructure, its poor planning, the seeming impossibility of finding any solution ever. Many agencies are responsible for the mess that Mumbai is. However, the largest share of the blame falls on the party that has ruled the BMC for close to 30 years now — the Shiv Sena.

The Shiv Sena, born, and thriving, in Mumbai. The Shiv Sena, the Marathi manoos’s self-appointed guardian and champion. Shiv Sena, to whom Mumbai has remained loyal, for almost no discernible reason.

For a party that drives most of its muscle and money from the fact that it rules the BMC, the Sena seems to care precious little about the city’s issues.

One would think it would be difficult to come up with excuses for not performing year after year. The Shiv Sena sidesteps that problem neatly — it bothers to provide no answers. The standard reply of the party so far has been the hand of god — “what we can we do if it rains so heavily?” — and now, the hand of BJP — “what can we do if the senior partner in the government is corrupt and useless?”

Last year in August, more than 20 people had died in Mumbai, apart from homes, railway tracks and roads flooding.

When questioned by the media, Sena chief Uddhav Thackeray had shot back: “You stop the rains then...Tell me what should I do.”

Party mouthpiece Saamana, an eloquent weekly that loves to criticise ally BJP in highly creative terms, had offered: “Mumbai and Maharashtra have always received the blessings of Ganpati. We believe that God will ease this trouble as well.”

This year, the Sena was pro-active: Mayor Vishwanath Mahadeshwar, in a warning plus excuse, told citizens Mumbai might flood, but it would be the BJP’s fault, for it had dug  up the whole city for its fancy metro project.

Money down the drain

So what exactly is wrong with Mumbai? The answers are no great mystery, they have been pointed out over and over again, and ignored resolutely.

Everything that can go wrong with Mumbai has been allowed to: its drainage system is a mess, its rivers are glutted with garbage, almost every inch of the city is concretised, which allows water no way to be absorbed by the ground, its roads erupt with craters in the first shower — and this claims lives — its natural buffers against flooding, mangroves, wetlands and salt pans, have been fed to builders.

Every year, the BMC fails to repair potholes before rains begin. Every year, it fails to clean up clogged drains ahead of the monsoon. All year round, it fails to check illegal constructions and ensure that even the legal ones follow rules. 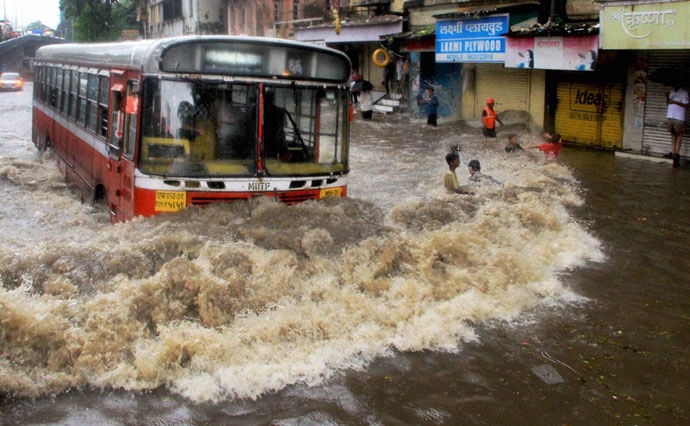 That sinking feeling: Buses are not meant to function as amphibian vehicles. Photo: PTI

Mithi, Mumbai’s principal river, is so choked with plastic and other trash that it promptly regurgitates all the water that flows into it during the rains.

The Brimstowad drainage project, in the works since 1985, is still incomplete — of the eight pumping stations and 58 projects planned under it, till 2017, 28 had been completed, 27 are still in progress and three projects have not even started.

Such mind-boggling, multi-crore figures are common for the BMC — its flood-abatement program was allotted a budget of Rs 565.55 crore for 2018-19.

The solutions it comes up with are exotic — last year, to fill potholes, it got cold mix for Israel, this time the material is from Germany.

The civic body, thus, has money and imagination, it’s only the implementation part that it is rather bad at.

The party that rules it has been getting rich off the BMC, making no effort to make it efficient and accountable.

Stop punishing Mumbai for its ‘spirit’

The “spirit of Mumbai” is a tired cliché, but it is also accurate. Despite the best efforts of its governing authorities, the city manages to function, because people are barely clinging on to survival, and cannot afford to give up. Unsinkable: It is literally the 'spirit of Mumbai' that keeps it afloat. Photo: PTI

Every day on an average, during the peak hours, 5,300 people travel in one of Mumbai’s local trains, meant for 3,504 passengers. When tracks are flooded, this is the number of passengers stranded in only one train. Yet, they get down, wade on, find other ways to reach work. Policemen and civic staff stand for hours in waist-deep water and make sure the city is functional. Officegoers stoically pack toothbrushes and a change of clothes, in case they can’t make it back home from work.

Mumbai is being punished for its bravery and resilience. It is time the Shiv Sena gave something back to the city it owes its existence to.

Also read: Mumbai rain mess is here to stay. But people are only paying for their choices

Post your comment
#Shiv Sena, #BMC, #Monsoon, #Mumbai Rains
The views and opinions expressed in this article are those of the authors and do not necessarily reflect the official policy or position of DailyO.in or the India Today Group. The writers are solely responsible for any claims arising out of the contents of this article.