Utpal Dutt Today: How would the thespian have fared in the age of Netflix and Chill?

It's 26 years since Utpal Dutt passed on. Would he have achieved the same glory today with online platforms, where ‘content’ and ‘actor’ surpass the ‘star’, but have a much shorter screen life?

It might have been 26 years since the great Utpal Dutt passed away — yet, in addition to the scores of film afficionados that continue to rediscover him, every year, legions of new admirers join the ever-growing list of the thespian’s fans.

It’s interesting to see how Dutt continues to be an inspiration in a period that is nothing less than a golden era of sorts for actors, irrespective of the platform they hail from. At the same time, one can’t help wonder, had Dutt been around today, would he have managed to achieve the same glory?

In this day and age of OTTs and online streaming platforms — where the ‘content’ and the ‘actor’ has genuinely surpassed the ‘star’ quotient — someone like Utpal Dutt would have ideally had many takers. More importantly, the talent that Dutt possessed would have also seen roles and characters specially written with him in mind. Dutt is often credited with having renovated acting in Bengali theatre and cinema where he was a much-respected name before he shifted to Hindi films with Mrinal Sen’s breakthrough Bhuvan Shome (1969).

Dutt started his career in the 1940s with Geoffrey Kendall’s theatre group performing Shakespeare and Brecht and formed his group in 1949. Later, he also joined the Bengal unit of IPTA (Indian People’s Theatre Association) where he performed agitational plays. Dutt made his film debut in the remarkable Michael Madhusudhan (1950), and by the time he won the National Award for Best Actor in Sen’s Bhuvan Shome, he was a legend in his own right. 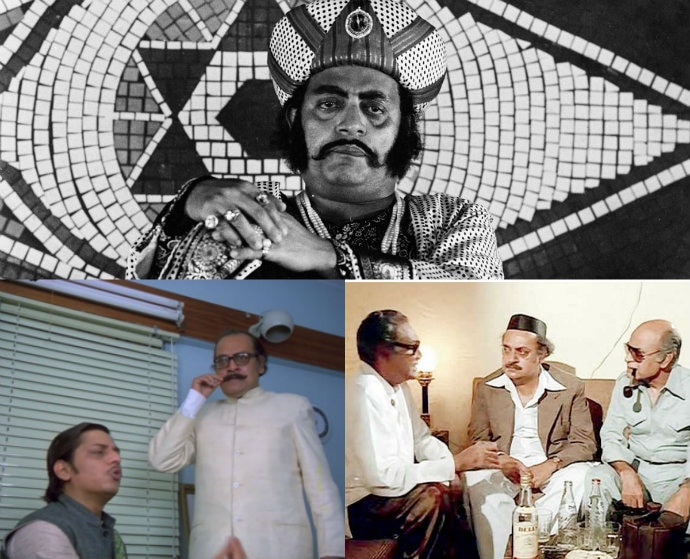 Thespian x 3: Dutt’s all-around mastery at acting in three languages — Bengali, English and Hindi — made him one of our finest ever. (Photo: YouTube screengrab)

Although today, Utpal Dutt might be largely recalled for his comic characters, especially Bhawani Sankar, the moustache-loving disciplinarian in Hrishikesh Mukherjee’s Golmaal (1979), his career is peppered with brilliant performances across not just theatre and films, but also nearly every single genre. If, on the one hand, Dutt holds the distinction of featuring in the film that practically laid the foundation of the New Wave in Indian cinema — Bhuvan Shome — on the other, he also featured in the final film that Satyajit Ray made, Agantuk (1991). Dutt’s all-around mastery of the craft of acting in three languages, Bengali, English and Hindi, and the finesse with which he imbibed characters, made him one of our finest ever.

Despite the immense popularity and success that he enjoyed, is it possible that Dutt might not have been able to attain the dizzying heights he was capable of truly?

While Utpal Dutt is rightly regarded as an institution — had he been in the West, his name would have been taken with the same reverence as Sir Laurence Olivier, John Gielgud, Maggi Smith, Ian McKellen and Michael Gambon. Would it have helped Dutt if the world were as connected and, in the manner of speaking, as small during the period he was active?

Of course an actor like Utpal Dutt might have benefited greatly from platforms such as Netflix or the possibility of getting any film made today because a dedicated audience exists in some corner of the world — but it is also possible that the chances of Dutt getting typecast, too, would have been much higher.

Actors that could have taken over the torch from Dutt themselves appear to be struggling when it comes to getting roles that do justice to their talent. It’s telling that even in the so-called golden era of television and films, a Pankaj Kapur or Boman Irani find it impossible to get something worthwhile. Relegated to the category that is unjustly labelled ‘character actor’, Utpal Dutt still managed to play characters that somehow became the fulcrum of the entire narrative.

By comparison, Boman Irani — who had a great early phase in films with the Munna Bhai series and Khosla Ka Ghosla (2006) — soon found himself typecast and the passage of time has seen him limit his appearances.

In just a few years, Pankaj Tripathi, too, who would undoubtedly be one of the finest contemporary actors, had started to look jaded.

It's unfortunate that actors such as Neena Gupta and Surekha Sikri were overlooked to play real-life septuagenarian shooters Chandro Tomar and Prakashi Tomar in their biopic, and instead, Taapsee Pannu and Bhumi Pednekar were preferred in Saand Ki Aankh.

As we reminisce Utpal Dutt, who was just 64 at the time of his death in 1993, let’s hope actors who deserve better don’t get sidelined — because they don’t fit some weird definition of ‘star.’