Book Review: Return of the Brahmin, a Magadhan James Bond

Flawless in description, precise with facts and immense by reimagination, the core story follows the exploits of the Brahmin, formerly Ashoka’s spymaster and the second most important political figure in the Ashokan empire.

The great Indian pride in its history does not always translate to respect, or knowledge. For history is never static and definitely not encapsulated in a single dominant strand. Unfortunately, to most history remains a dry subject full of facts, strange names and dates as taught at school: whereas its reality is alive, layered and dynamic, stretching infinitely into the past. Every successive era owes ancestors a re-examination of the existing narratives through fresh lenses. And a book that returns readers to the first principles of a subject does what a book must do — illuminate even while entertaining. This revisit to a golden epoch in ancient India is via Return of the Brahmin by Ravi Shankar Etteth, a sequel to his previous novel The Brahmin, playing out in that elaborate wonderland of Emperor Ashoka’s kingdom rife with subterranean intrigue and volatility. 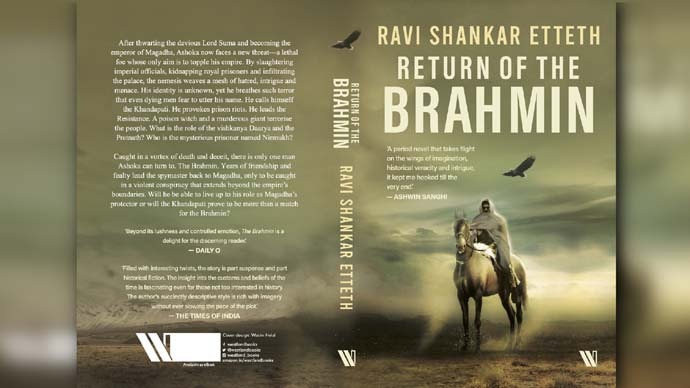 Flawless in description, precise with facts and immense by reimagination, the core story follows the exploits of the Brahmin, formerly Ashoka’s spymaster and the second most important political figure in the Ashokan empire. He is the Magadhan James Bond doppelganger from the 3rd century BC. Jaded by the War of Kalinga and its aftermath, the Brahmin is technically a deserter forced to return at the behest of an unknown beauty. Storm clouds have been gathering and much menace looms around the royal family and, by extension, the kingdom.

His reappearance locates him at the centre-stage of numerous assassination attempts on the emperor and on himself. As a warrior par excellence, the Brahmin is immune to poison and uses a pet eagle as one of his minions. Predictably, he trusts no one. Even Emperor Ashoka, who despite elevating him to the highest possible stature in the state, remains mercurial: vacillating between fear and pride, mistrust and anger. The many faces of terror are ominously like fantastic beasts. The preternatural villains the Brahmin encounters as he works on the emperor’s security include the duo Vishdayin the poison witch with Danav the demon, and the shapeshifting Pretnath necromancer of Narak Nagiri. Though in his mission he is aided by as fantabulous loyalists, the renowned vishkanya Daarya for example, expert in the art of poison and seduction.

The storyline pivots on a vital question, the answer to which has been hiding in plain sight down centuries. Namely, did Ashoka who was by nature cruel and belligerent, actually turn Buddhist and peaceful on witnessing the carnage of the War of Kalinga? There are reports of earlier massacres of every sibling who stood between the throne of the Maurya empire and himself. And no man may deny his inner demons. The conversion is a fact. However, it is highly probable Ashoka’s bloodthirsty ways sustained without a blip whitewashed by scribes who knew a word otherwise could cost them their lives. 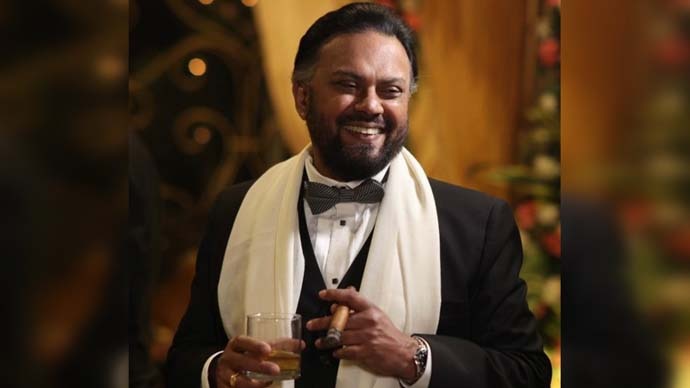 Author of Return of the Brahmin — Ravi Shankar Etteth.

The empire is not peaceful, far from it. For example: the harmless sect of Ajivikas believe there is no reincarnation which puts them in direct opposition to majoritarian Buddhists and are put to death in hundreds, strung by the roadside rotting for all to see the price of religious dissent. Ominous friction between the Buddhist monks at the court headed by Padmapada and the Hindu priests increases the body count. For Ashoka there is always fear of retribution by a lone assassin from the various kingdoms he’d conquered, including Kalinga. Meanwhile rebellion is brewed by the emperor’s nemesis Khandapati whereas guarded by fierce blind anetras lives the mysterious prisoner Nirmukh who seems more a legend than reality yet poses great danger to the king. Through all this, Empress Asandhimitra spins out her own deadly agenda.

As this atmosphere of intrigue reaches its flashpoint, the Brahmin sets about hunting the elusive Khandapati, embarking on a relentless path of no return. Corpses fall like dominoes, the crown prince is kidnapped and no one is safe. The Brahmin knows full well every act must be interpreted with suspicion and lucid thought. At stake is his very life.

Entwining the machinations of this massive cast of characters into an edge-of-the-seat breathless thriller is no mean feat. In essence this is an intellectual response to series like Game of Thrones, epic in its stretch and exquisitely crafted, leaving the reader hungering for more. An action thriller woven like a fable, the book stands out for the immaculate research, scholarship and killer vocab which make it superior to many nonfiction historical texts. There is no doubt that this is a narrative spun by a master ninja storyteller.

#Ravi shankar etteth, #Return of the brahmin, #Bookreview
The views and opinions expressed in this article are those of the authors and do not necessarily reflect the official policy or position of DailyO.in or the India Today Group. The writers are solely responsible for any claims arising out of the contents of this article.