Author Shridhar Damle on why the head of a ‘cultural organistaion’, Mohan Bhagwat, is talking of raising an army.

There has been much controversy around RSS sarsanghchalak Mohan Bhagwat's views on the Indian Army and the RSS. The RSS has always been at pains to call itself a cultural organisation, and to state publicly that it could create an army in three days was astonishing.

Kaveree Bamzai spoke to Shridhar Damle, long-time observer of the RSS and co-writer of the seminal 1987 book Brotherhood in Saffron; The Rashtriya Swayamsevak Sangh and Hindu Revivalism.

The RSS has always been a cultural organisation. Now there seems to be a conscious design to suggest it can be transformed into an army, even going to the extent of actually undermining the army. Is this part of a re-imagining of Hindus as a martial race? 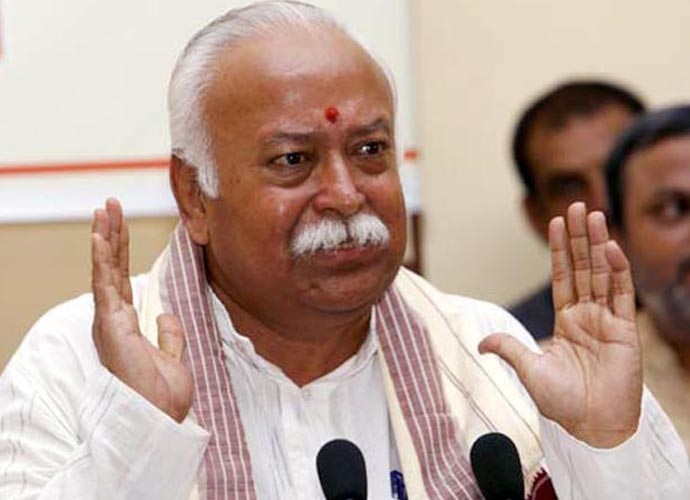 As Walter K Andersen and I explained in our book Brotherhood in Saffron, like other pro-Hindu Congress leaders and non-Congress Hindu nationalists, Dr Keshav Baliram Hedgewar also recognised the need to organise the divided Hindu society. Since patriotic leaders were deeply involved in the freedom struggle, Dr Hedgewar decided to organise Hindu society as his mission.

He felt that the silent work of social cohesion (above caste and sect divisions) and national character (patriotism) were the need of the hour to gain freedom and preserve freedom, since Hindus had been the bedrock of India (he did not like the majority/minority concept of Veer Savarkar). For him, only organised, disciplined and trained (intellectual, physical with traditional martial arts), selfless and dedicated volunteers could transform society, like Lenin's thesis of a disciplined few bringing in a revolution.

So, like other Hindu nationalists, Dr Hedgewar or his successors silently set aside the Chaturvarna theory (divide society into four compartments – Brahmins for teaching, Kshatriyas to rule and fight battles, Vaishya for business and trade and Shudra for agriculture and required services) or caste identity.

So according to the RSS, this is neither regimentalisation nor militarisation. The RSS emphasises that it is a citizen's duty to learn self-defence, defend society and ultimately defend the country, through disciplined and organised action.

Regarding the capacity of RSS cadres to transform into soldiers, let me present you with a historical document. In 1937, Hindu leader Dr BS Moonje wanted to establish the Bhosala Military School at Nashik, Maharashtra. He secured an approval from the Viceroy and Commander in Chief of Army, but the then Governor of Bombay, Lord Brabourne, opposed a Hindu military school. He argued that trained cadres from the school would be commissioned officers in the Indian army.

He further stated that because of their strict discipline and military training, RSS volunteers could easily be transformed into soldiers with a few weeks' training of handling arms and ammunition. He feared that if these three groups – commissioned officers in the Indian Army from the Hindu military school, RSS soldiers, and Congress masses came together –then it would be a danger to the British Empire in India.

During the pre-partition time (1946 to 1947), the RSS protected Hindus (including the Sikhs, with their cooperation). According to Balasaheb Deoras, the RSS was superior in man-to-man fights in Lahore, but could not fight against machine guns. Twelve thousand RSS volunteers (including a nephew of the famous actor Prithviraj Kapoor) sacrificed their lives to protect and bring back Hindus.

The RSS military role in Kashmir at time of Pak attack in 1947 is still an unknown story. With a subtle request from Bombay IGP Nagarwala via CID officer Nabar, more than 100 RSS cadres with a few days of training in handling rifles and hand grenades recaptured communist-controlled villages and liberated Dadra Nagar Haveli in 1954.

I was told by the famous music director and singer late Sudhir Phadke, who participated in the 1954 liberation of Dadra Nagar Haveli with his wife Lalita Phadke, that once again, in 1960, the Government of India made a secret inquiry about possible help from the RSS to free villages in Goa, so the free Goan government of Dr Gaitonde in London could request military help from the Indian government.

Late Sudhir Phadke informed me that he met then RSS chief Golwalkar Guruji and the RSS agreed to the proposal. But somehow, the Indian government decided to liberate Goa by sending the army in December 1961.

So it is not a reimagining of Hindus as a martial race, but making the whole Hindu society aware of its civic duty, with compulsory military training.

So how can the RSS then call itself a cultural organisation?

Though the RSS accepted Veer Savarkar's school of thought of "Hinduise politics and militarise Hindus" in principle, I feel the RSS would not like its organisation as a para-military group within society. The RSS does not consider itself as a group within the Hindu society. It wants to cover all Hindu society via transformation of sanskars.

The RSS has stated that it will not do anything other than organise society, but swayamsevaks will do everything required by society. If the society is ready by its mindset and action, then swayamsevaks will be at the forefront of any action for the Hindu and national cause.

I think given its sanskar of patriotism and working selflessly for society, the RSS considers itself a cultural organisation. RSS is aware of the danger of paramilitary groups and of "revolution eating its own children" in a power struggle. The RSS recognised people power during the Indira Gandhi Emergency period and the electorate revolution in 1977 and 2014. So with 36 Sangh Parivars organisations, RSS feels that it can play an important role as a check and balance on political power.

The RSS never called its members cadres, but "swayamsevaks", who become sevak of their own volition with required skills and disciplined training. Cadre is an English word, but not accurate, as in other cases, it fails to describe Dharma (religion is crude translation, sect or samprayad is as equal to religion). RSS, I feel, understands the limitation of its volunteer, so gives him the freedom to choose what he likes to serve the society selflessly - to transform into either army or para military auxiliary force like the people's militia you need: physically fit, bold youth, while others can play supplementary role as good citizen which the British and Russians did in the Second World War, the Israelis in their wars, or the Vietnamese in their national war.

How do you assess Bhagwat's role so far in the RSS? Has he reshaped the organisation in any lasting fashion?

It is too early to evaluate the role of Mohanrao Bhagwat. Unlike late KC Sudarshan as Sarsanghchalak, Bhagwat avoids loud criticism on public fora. Mohanrao Bhagwat is known for working behind the scenes with efficiency. Most of the time, he gives a sublime message, sometimes blunt, but with politeness (For example, "BJP needs change of leadership" in 2009 interviews and the handling of the LK Advani storm in cup of tea). His Vijayadashami speech in 2014 also contained a sublime message to the Modi government regarding the need for swadeshi economic measures to take care of farmers and small-scale traders.

There have been exceptions, such as while replying to questions from Organiser/ Panchjanya editors regarding the sensitive reservation policy, which created embarrassment. The same thing happened with his remark of the RSS transforming into an army in a short period. Prachar Pramukh Dr Manmohan Vaidya has had to step in on many occasions to issue clarifications. Some people feel that this damages public perception and support from sympathisers.

But he has maintained a good and cordial relationship with BJP leaders and ministers, including PM Modi. Mohanrao Bhagwat is a good mediator, who allows different parivar organisations to express their views within limits (no derogatory criticism as in Vajpayee times).

He took a firm position like the VHP on the Ram Janmabhoomi issue. He encourages the Shiksha Bachao group and Vidya Bharati for Hindu values-based education, Sahakar Bharati to reach out to the lower middle class and poor people, Muslim Rashtriya Manch to connect with the minority Muslim community, Sanskar Bharati to be with artists from music, painting and dancers, Stree Shakti to deal with women's issues, Chitra Bharati to work within the film industry - the list goes on.

He holds dialogue with vice-chancellors, the business community, foreign diplomats. While his presence at the golden jubilee camp of HSS UK was low key, he will deliver a speech at the World Hindu Congress in September 2018 at Chicago. He has reemphasised loudly the RSS's inclusive definition of Hindus, which is ethno-nationalist.

Post your comment
#Hindutva, #Savarkar, #Mohan Bhagwat, #Rashtriya Swayamsevak Sangh
The views and opinions expressed in this article are those of the authors and do not necessarily reflect the official policy or position of DailyO.in or the India Today Group. The writers are solely responsible for any claims arising out of the contents of this article.