The whole nine yards of Sabyasachi Mukherjee’s ‘credit’ faux pas. And this isn’t even the first time

Why Sabya just doesn’t seem to be able to identify his own creation?

Sabyasachi Mukherjee believes, as per his interview to Architectural Digest, that one needs to reinvent themselves every three to five years to stay fresh in fashion. After he grew “tired of gaunt faces and stick-thin models”, he briefly discovered ‘boobs.’ And now seems to have moved onto a different trope — that of claiming others’ creations as his.

After all, what could possibly be more exhilarating than claiming credit where it’s not due?

Here’s a bit of context for those living under a heavily-embroidered ghagra (which may or may not have been designed by Sabyasachi). On November 16, just a day after Deepika Padukone and Ranveer Singh’s two-day wedding event ended, and the couple were ready to share official pictures from the do, Sabyasachi put out an Instagram post, wishing the two “a wonderful and happy married life.”

“Deepika Padukone and Ranveer Singh head-to-toe in Sabyasachi for their wedding in Lake Como, Italy,” he writes in the post. This was an image from their Konkani-style wedding, where Deepika was dressed in a red-gold Kanjeevaram saree, complete with heavy Polki jewellery. 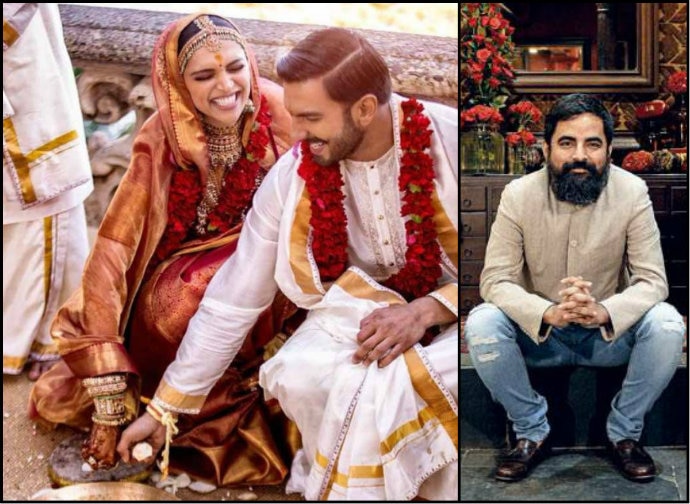 Now, when Sabya writes ‘head-to-toe’, we believe because it’s not that we’d ever get the chance to walk up to Deepika and check the tag on the saree.

Celebrity wedding enthusiasts were divided post this declaration — with both halves going “Oh, another Sabyasachi bride” but in two different tones.

The problem, however, was that Sabya hadn’t actually designed the said saree. 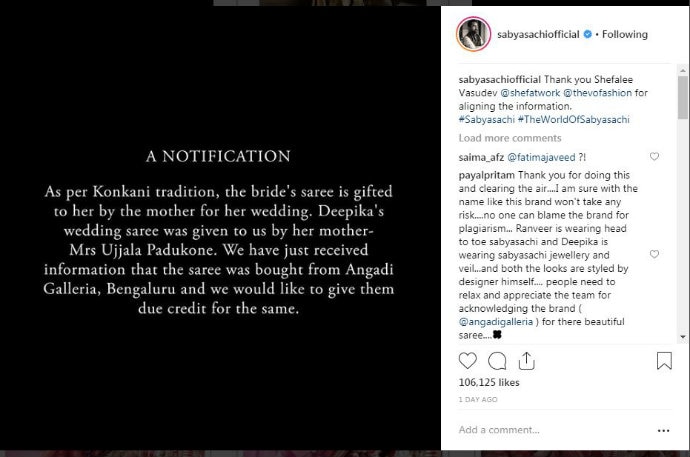 In an apology that followed, the designer clarified that as per Konkani tradition, the bride’s saree is gifted to her by her mother, in this case, Ujjala Padukone. “We have just received information that the saree was bought from Angadi Galleria, Bengaluru, and we would like to give them due credit for the same.” Apparently, team Sabya had only “trimmed and styled” it, and added the jewellery and the veil.

The goof-up was brought to their notice by Shefalee Vasudev, who spoke to Radharaman K, the store founder. She further adds in her Instagram post that Sabya’s team immediately took note of it and were ready to issue a clarification.

This was after ‘Sabyasachi’ had trended on social media for a full five days.

Now, to err is human, and we get that. But Sabya has already used up his pardon the last time he did something so uncannily similar. On Virat Kohli and Anushka Sharma’s Mumbai reception, Anushka was dressed in a smokey grey shimmery lehenga, a Sabyasachi creation, while Virat was seen in a navy blue Bandhgala with white Jodhpurs and a pink pocket square, by Raghuvendra Rathore.

But Sabya went ahead and claimed credit for it anyway. 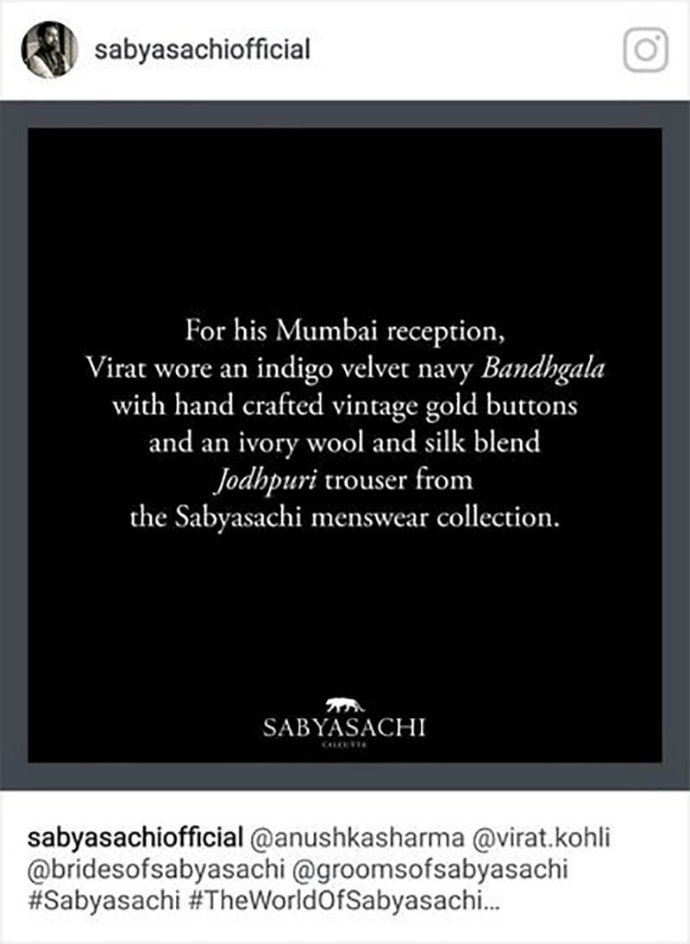 In a now-deleted Instagram post, Sabya apologised to his fellow designer for the faux pas, “Virat Kohli looks absolutely dapper in a Raghavendra Rathore. We had made a very similar piece and in the confusion of the great Indian wedding, the credits got swapped. Mr. (Sabyasachi) Mukherjee is personally a huge fan of the Rathore label and deeply regrets the error."

Oh, the great Indian wedding and all its confusion!

CoupleGoals! The groom looks dapper in a classic style number RJ19 #Rathore #Bandhgala and #Breeches at his wedding reception while the bride dazzles in a @sabyasachiofficial. A true testament to classic styling that can never fade! Kudos to the captain and his beautiful bride... #bandhgala #raghavendrathore #heritage #ViratKohli #AnushkaSharma #ViratAnushka #Virushka. @virat.kohli @anushkasharma

Why on sartorial earth is Sabyasachi incapable of identifying his own work? Or is it like, 'if it's ethnic and an A-lister is wearing it, it must be mine!' Instagram's fashion police (in the true sense of the term) DietSabya were tearing their hemline off wondering how to call this out!

Now, why am I so offended by Sabyasachi’s cyclic pattern of oopsie-daisies?

Because in a world plagued by nepotism, it is only craft that sets one creator apart from another. And social media’s explosive power is capable of destroying both.

I am a Sabyasachi fan, and not because he represents the part of the nation, the culture and sensibilities I identify with. It is because he, in some way, emboldened Indian celebrities to rock an ethnic saree, even on the red carpet at Cannes. He reminds us, every day, that there’s much, much more beyond a simple gown.

But his pattern of mixing up credits takes away his credit for doing what he’s done to revive Indian fashion.

But, from one Mukherjee to another, stop. For your own sake.

Post your comment
#Ranveer deepika wedding, #Ranveer Singh, #Deepika Padukone, #Sabyasachi Mukherjee
The views and opinions expressed in this article are those of the authors and do not necessarily reflect the official policy or position of DailyO.in or the India Today Group. The writers are solely responsible for any claims arising out of the contents of this article.