The film ‘Sanju’ is a textbook study of everything that can be misrepresented in the garb of real events when it comes to popular Hindi cinema.

Realism in films is a tricky terrain. Irrespective of how popular cinema interprets reality, it cannot, by virtue of its definition, show too much of it lest it ends up being too real to escape from.

Although the cinematic interpretation of reality hardly shocks anymore, there are instances nonetheless when the manner in which it plays out on the screen leaves you scratching your head in disbelief.

Perhaps this is the reason why even an organisation such as the Central Intelligence Agency (CIA) couldn’t help but invite Daniel "James Bond" Craig to visit them as a part of an initiative called “Reel Vs Real” that aims to demystify what they do as "spies" and how Hollywood saw them.

Both Hollywood and "commercial" Hindi cinema would justify their actions by suggesting that they need to show the truth in a way that is both close to reality as well as entertaining. But why do things go south when it comes to depicting a certain kind of reality that includes writers, journalists, and film personalities?

The recently released Sanjay Dutt biopic, Sanju, is a textbook study of everything that can be misrepresented in the garb of real events when it comes to popular Hindi cinema. In the film, Dutt (Ranbir Kapoor), a superstar convicted in the 1993 Bombay serial blasts case, desperately wants his atmakatha, autobiography, to tell his version of the truth before his incarceration. He asks a friend to read from a "published" copy of the book but ends up burning it as it’s not what he seeks.

He then meets an author (Anushka Sharma), who after much emotional cajoling agrees to pen his story. For all the realism that director Rajkumar Hirani would like you to believe adorns Sanju, this is not how books are written.

In fact, Sanju’s imagery, be it authors, journalists and newspaper editors, to name a few, is so far removed from reality that it seems Hirani and the other co-writers brought into the myth propagated by Hindi cinema when it comes to showing such characters. Would it be too incorrect to say that Hirani’s perception of what an author is or how one gets published is inspired by films like Baghban (2003) and Shabd (2005)?

The impact that "Bollywood" has on reality is pernicious in more ways than one can imagine, but the bigger menace is the reverse influence that popular cinema seems to have on how we are made to believe that something is authentic and real. Much like the way we now think how journalists operate or lawyers constantly chastise the judge for giving the plaintiff the grief of endless tareek instead of insaaf, Sanju, too, would probably convince you of a reality that might not exist.

What’s more is that this might not be limited to the way the onscreen Dutt went about getting his book written. The fact remains that for a large part of the audience, which for one reason or the other might not be privy to the reportage that came about in the early 1990s when the news of Dutt’s alleged involvement in the blasts became public, would believe that the film offers a high degree of reality because of Dutt’s involvement with the project. 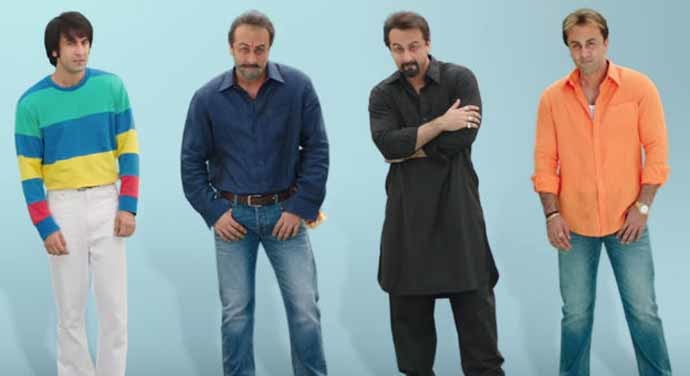 One of the definitions of the word "authentic" includes "being authoritative" and Dutt’s version both in Sanju and his upcoming autobiography that would be published by HarperCollins next year because of coming from him become "real".

The American philosopher Nelson Goodman observed that the difference between something original and a forgery or an edible mushroom or a poisonous one even if we cannot see it, is in the bearing it has on our behaviour. The desire to know what is real and the ramifications it could have on how we see things, should we chose to accept it, becomes a finer line for "official" Hindi biopics.

What makes the depiction of reality in popular Hindi films, especially such as Sanju, worth interpreting beyond the standard definitions is the manner in which it puts a premium on authenticity as a commodity while being fully aware of the fascination that elements of escapism and fantasy hold for the regular ticket-buying audience.

Also read: How to make Varun Dhawan a star: Anatomy of a Bollywood ad campaign

#Ranbir Kapoor, #Sanjay Dutt, #Cinema, #Biopic
The views and opinions expressed in this article are those of the authors and do not necessarily reflect the official policy or position of DailyO.in or the India Today Group. The writers are solely responsible for any claims arising out of the contents of this article.