Why Searching for Saraswati matters

Filmmakers Shirley Abraham and Amit Madheshiya, forces behind the beautiful documentary The Cinema Travellers, found an idea for a film in Haryana government’s search for a lost river. When the Sundance Institute-MacArthur Foundation Short Film Fellowship sought voices that would explore “contemporary issues”, the duo were aware that the BJP-led state government had set allotted funds to dig out the mythical river Saraswati said to be lost for 5,000 years.

So began the award-winning duo’s quest to unearth answers to a flurry of questions. They find some answers in the 20-minute short Searching for Saraswati, currently streaming on the New York Times website.

“It was an empirical curiosity,” they say that drove them to Mughalwali, the village in Haryana where the river was supposedly found, with a list of questions: “Why must the government zealously seek to resurrect it [Saraswati] in today’s age? What kind of political imagination guides this quest? And when it filters into a village how do faith and reason; religion and science; and propaganda and perception collide?”

The clash of religious myth and logic is the crux of the film. While farmer Sahiram Kashyap is in worship mode near a well, which he believes holds water from Saraswati, another local farmer in Jarnail Singh wonders where is the force and flow to suggest it’s a river. “As high caste Hindu Brahmins, we believe in scriptures,” says one resident; Jarnail wonders if they will next resurrect Lord Ram and Ravan from these very scriptures? A priest, a politician, a Right to Information activist all lay down their points of views on the issue. The different voices provide historical, cultural and political context and more so humour.

“We discovered that the residents of Mughalwali were of conscious political mind, and well aware of what this gold rush for Saraswati might mean for Mughalwali to develop as a pilgrimage on the map of the world,” said the duo. “It became significant to recognise systems of their collective faith and belief as living outside the vessel of naiveté. As film makers we believe that a film must destabilise some of the notions you walk into it with. In this case, it was the assumption of an unconscious system of faith.”

In a memorable sequence, Abraham and Madheshiya show a tempo slowly moving with Saraswati quotations from the Rigveda with the Science Museum in the backdrop shut. 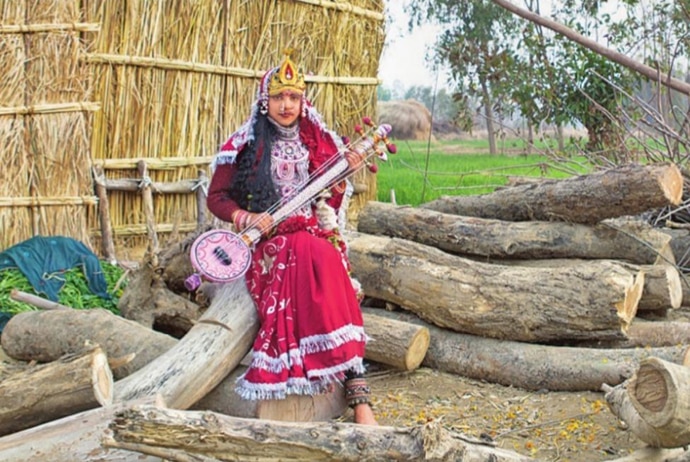 The filmmakers cited the case of Giordano Bruno who was imprisoned for daring to question the teaching of Bible in Italy in 1584 and subsequently killed for his proposition based on science. “Fortunately, the scientific revolution that outlived Bruno gradually freed us from the chains of locating absolute truth in holy books,” they said.

“Science evolved as a continuous process of learning, building upon earlier discoveries and empirical evidence. It helped us create the modern world where there is no absolute truth, but only insatiable curiosity. Where questioning is valued, and so is the need for rational critical thinking.”

What Searching for Saraswati manages to do is make the viewers question the wisdom of those elected to power and the worrying, rising trend of distorting history. The filmmakers are aware that their work may invite scrutiny from the rightwing trolls, the same who viciously attacked Sushma Swaraj on social media.

“Our intention is to present a critical perspective on manipulations of time-honoured myth and faith to mislead the public for political advantage, and further, to underline the vital importance of healthy civil discourse in India,” said Madheshiya and Abraham.

“We seek to ignite thinking and conversation, across political and religious beliefs. We would like to believe that our ambitions go beyond merely antagonising anyone for their leanings. We often wonder about the real purpose of the Seventh Art. For us, filmmaking is about raising consciousness. It is a struggle for making meaning out of human existence and seeking repose in Arthur Miller, we try to ‘get closest to what is hidden’.” If not their words, their film surely should do so.