Six things to know about some popular Indian myths.

Wendy Doniger is back with another brilliant intellectual adventure that examines the roles of sex and jewellery in myths modern and ancient. In The Ring of Truth: Myths of Sex and Jewellery, she takes us from the good girl trope of Doris Day and bad girl trope of Marilyn Monroe to William Shakespeare to Alfred Hitchcock's Vertigo, with little asides on French history, Indian mythology and Nora Ephron's Heartburn along the way. Here are six things to know about sex, jewellery and some popular Indian myths.

1. In Valmiki's Ramayana when Ravana abducts Sita, her jewelled anklet and pearl necklace fall to the ground. Then she throws down her other jewellery hoping the group of monkeys below will find them and tell Ram.

Jewellery plays another role in the kidnap — Sita is entranced by the golden deer which she orders Ram to chase, made more beautiful by its being covered with jewels. Hanuman also eventually recognises her by her jewellery even though a "good Hindu wife" would not be wearing jewellery except for her husband.

In this case, Sita being a princess is exempt but her jewellery, as a compromise to protect her virtue, has "dimmed with constant wear". And what does Hanuman give Sita as a mark that he is from Ram? His signet ring of course. Hanuman also eventually recognises her by her jewellery even though a "good Hindu wife" would not be wearing jewellery except for her husband.

2. A signet ring features in a newer version of Kalidasa's Shakuntala where Dushyant gives it to Shakuntala as a symbol of his love. By a complex set of circumstances, Dushyant finds the ring and remembers Shakuntala after first denying they know each other when she comes to tell him she is pregnant.

3. In a Tulu tale of Shiva and Parvati, Parvati leaves him in fury one day and disguises herself as a Korpalu, a forest tribal. When Shiva approaches her, thinking she is a Korpalu, they remain together in the forest for two days and three nights.

As Shiva is leaving she asks for something to pay for her expenses if she gets pregnant. Shiva gives her a golden ring with a seal, among other things, which Parvati uses to catch him out for his adulterous behaviour. As Doniger writes: "Parvati appears to Shiva doubly disguised, as a human and as low caste. Shiva dismisses both problems, lying by saying that he is a human (he is a god, as she immediately reminds him) and lying in the eyes of Hindu caste law by saying that all human beings are equal when it comes to sex. Parvati then uses sex and jewellery to deconstruct the power of a husband, the power of a god, and the power of caste." 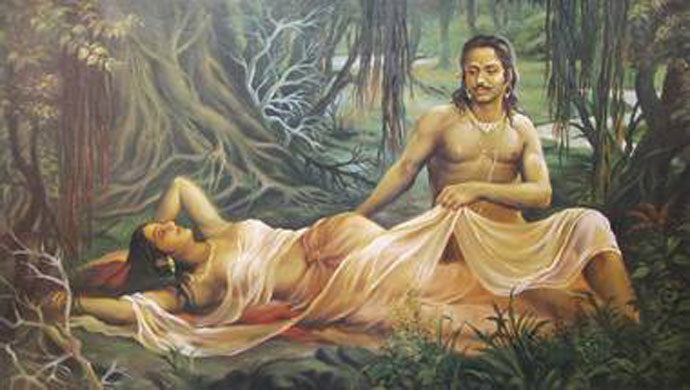 By a complex set of circumstances, Dushyant finds the ring and remembers Shakuntala after first denying they know each other when she comes to tell him she is pregnant.

4. Jewellery was as much part of the woman's body as the man's body. Karna, for instance, was born with golden earrings and golden armour that was part of his skin. When he grew up, Doniger points out, he was tricked into cutting them off, a bloody and excruciating but not fatal operation.

5. A woman's body parts are often compared to jewels: pearly teeth, ruby lips, eyes shining like diamonds, golden hair. One of the earliest images where jewellery is part of the skin is the dancing girl of Mohenjodaro, "totally naked save for a chunky necklace and an assortment of bangles". The Rings of Truth: Myths of Sex and Jewelry; Wendy Doniger; Speaking Tiger

6. A ring is also at the centre of the myth of Krishna's son Pradyumna and a magician's wife Mayavati. Pradyumna was stolen by a demon who threw him into the ocean where he was swallowed by a fish.

Mayavati found the boy inside the fish and raised him as her own son, but was so entranced by his extraordinary beauty that she fell in love with him, confusing Pradyumna.

They are then revealed to be husband and wife in a previous avatar, and because she is a magician, she has no need of an actual ring to identify him.

#Wendy Doniger, #Myths of Sex and Jewellery, #Indian mythology
The views and opinions expressed in this article are those of the authors and do not necessarily reflect the official policy or position of DailyO.in or the India Today Group. The writers are solely responsible for any claims arising out of the contents of this article.