How Lucknow — the soul of tehzeeb — is reinventing Sham-e-Awadh

Where the market celebrates art.

Mention Lucknow and the image that floats in is of a city steeped in age-old cultural and artistic traditions. Its rich brocade of cultural confluences has won it innumerable fans and fame across the world. The city, once renowned for its poetic and literary lineage, seems to be undergoing a not-so-quiet transformation, surprising those who look at it with nostalgia-tinted lenses.

Nowhere is the change more visible than in the growing range of cultural and literary soirees that the city plays host to, throughout the year. The new face of Lucknow is in stark contrast to its popular image of a laidback town with impeccable mannerisms, subtle flavours and traditional values.

Historically, Lucknow has a rich history in theatre and performing arts, and over the years, has made significant contributions to the world of theatre, music, literature and poetry. 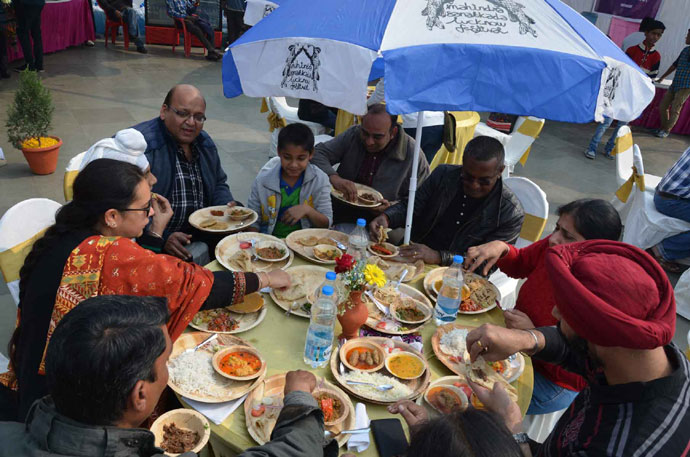 This is a Lucknow that is miles apart from its historical legacy. Photo: MSLF

The gradual decline in political and public patronage for the arts eventually led to the decline in artistic standards for performances and production values. Indifferent government policies and lack of infrastructure did not help either. Lucknow could not keep pace with the evolution in performing art forms and, like many other cities, failed to present a viable and sustainable economic model for the arts to thrive.

The stagnation of the last few decades was sensationally cleared away during the first decade of this millennium with festivals like Sanatkada Lucknow Festival, Repertwahr Festival, Lucknow Literature Festival et al that brought in modern aesthetics, aggressive marketing, widespread social media presence, subjects, themes and performances that were hitherto considered taboo or were too "bold" for the city's understated, nuanced sensibilities. An installation at Sanatkada Lucknow Festival.

The old themes and traditional production values gave way to new subjects, avant-garde performances and lavish productions. Topics like sexuality, digital divide, gender roles, censorship and morality were brought in the limelight. The Repertwahr Festival in particular pushed the envelope by introducing ticketed performances, mass media publicity and professional engagement with the audience and artists alike.

In a city where theatre viewing audience was in decline, even for non-ticketed or barely ticketed performances, Repertwahr has seen a steady increase in attendance and popularity despite high ticket prices.

Similarly, the Sanatkada Lucknow Festival built its model around its craft exhibition and sale, and enjoys phenomenal sales year after year, despite having been criticised for its pricing. While the jury is still out on whether this is a turn for the better or worse, the fact is that this is a Lucknow that is miles apart from its historical legacy.

There are those who believe that the new trends are not in tune with the city's historical and cultural character. A few others believe that theatre or any other art form for that matter evolves from and in turn shapes the society around it and should, therefore, remain accessible to all. Art cannot be the preserve of a select few. Prohibitive prices and commercialisation of art could lead to it being restricted to elite circles and take it away from its roots. On the other hand, in the absence of proper infrastructural facilities or government support, hosting the best productions from across the country is an expensive proposition. The Repertwahr Festival this year, for example, is hosting 28 shows of theatre, music and stand-up comedy and 150 celebrated artists from across the country and has an estimated budget of Rs 1.6 crore. Sponsorship alone cannot cover the costs associated with a festival of this scale.

Ticket revenues are the only way that festivals like these can cover their costs.

With the Repertwahr festival's eighth season about to start in December 2017, the age-old debate has shot back into prominence.

Critics claim that the tickets priced between Rs 250-500 can only be bought by a particular section of the society and the festival is elitist in its approach. The introduction of the seven-day stand-up Comedy Fest this year is also under the scanner for its "Adults only" content. The organisers, on the other hand, claim that even with such ticket prices, the festival will not be able to cover costs through ticket sales alone.

Organisers of Repertwahr take a stand on the thought that the ticket is only expensive if, after watching the show, the audience feels dissatisfied with what it has received in return.

Shubha Mudgal in concert at dawn, at Sanatkada Lucknow Festival.

In the first session of the All India Progressive Writers' Association, literary doyen Premchand condemned the concept of beautification of artistic work. He said that the aim of a writer should neither be purely a source of pleasure and joy for the audience nor restricted to the upper middle class. He emphasised the need to alter this concept of beauty in art.

At the same time, the rising attendance figures and huge popularity of such festivals in the city points to the changing values of the city.

The debate may linger till things change on the ground. However, the change is visible to any Lucknowphile who is interested in the cultural and artistic heritage of the city. Treading the knife's edge between pure art and the market's compulsions, these festivals and the entire ecosystem that they are nurturing are the changing face of Lucknow.

And from the looks of it, this seems to be the start of something that we are all going to hear more about.

#Repertwahr festival, #Lucknow, #Sham-e-Awadh
The views and opinions expressed in this article are those of the authors and do not necessarily reflect the official policy or position of DailyO.in or the India Today Group. The writers are solely responsible for any claims arising out of the contents of this article.

The writer is a freelance journalist, a Dastango and storyteller. He majorly writes about Lakhnavi culture and society.