An exclusive excerpt from Sridevi — The Eternal Screen Goddess, which tells you how Sridevi single-handedly revived Yash Chopra's career with Chandni.

With exclusive interviews of the biggest actors and directors that Sridevi worked with, both in Bollywood and in the southern film industries, the narrative is filled with anecdotes and inputs from all of them, tracing the legend's evolution from her first film as a child actor in Thunaivan (1969) to her grand finale with Mom (2017). The legendary Yash Chopra had been reeling with flops for a while now. All his ventures since the onset of the 1980s, including the much-hyped Silsila (1981), had crashed one by one. Chopra had almost convinced himself to shut shop and start making short films for T-Series. But before that plunge, he decided to take one final gamble. With heroes like Amitabh (Silsila), Anil and Rishi (Vijay) having failed him, he now turned to the heroine. In Sridevi’s stardom alone he found the courage to make one last bid for success. The man who had always presented hero-centric stories, now created his first heroine-oriented film. Hopeful that it would end his dark phase, he named it Chandni.

Talking to Stardust about this role, Sridevi again displayed her constant hunger to do something new: ‘For once I was offered a film that had no melodrama which I was used to doing in almost every other film then. Chandni, a lively and vibrant girl in the first half, goes into a shell in the second half. I loved that transformation.’

Film critic Anupama Chopra, whose mother, Kamna Chandra, had written the film, was a frequent visitor on the sets of Chandni. She reminisces: ‘At the mahurat, Sridevi loomed larger than life. Although flanked by the two heroes on stage, all eyes were only on her. It was this quality of hers that held Chandni together. If she had been even two per cent less magical, the film would have fallen flat.’

Essaying her first title role in Hindi cinema, Sridevi, as Chandni, finds herself at the core of a love triangle, with Rishi Kapoor (as Rohit) and Vinod Khanna (as Lalit) playing second fiddle. She is delectable as the maiden swept off her feet by a prince on a motorbike. Watch her face when Rohit unveils his room plastered with giant photographs of her, a moment that also celebrates Sridevi as India’s poster girl. Watch her excitement as she opens her first love letter, the mirth in her laughter as she feeds Rohit green chilli or the banter in her voice as she drunkenly repeats, ‘Cognac sharaab nahin hoti.’ When he showers rose petals on her from a chopper, Sridevi’s expression is pure euphoria. 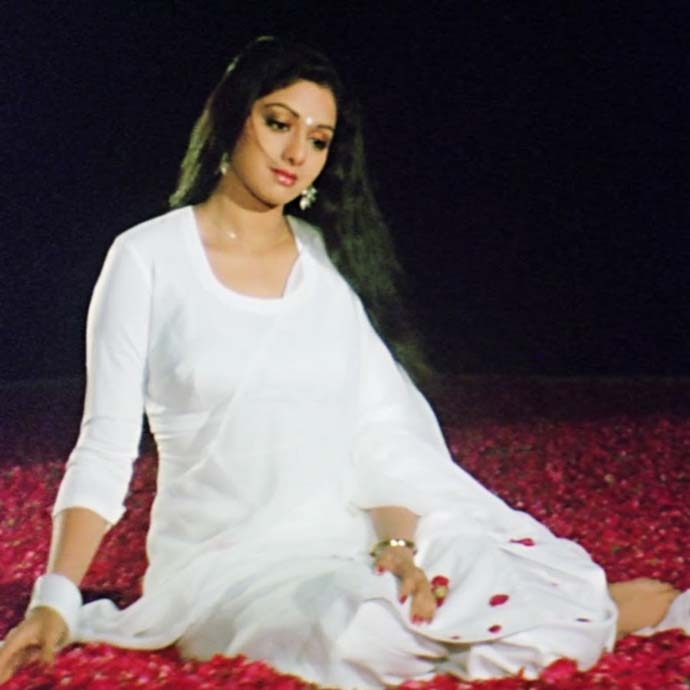 As she sits draped in lustrous white, she becomes the quintessential Yash Chopra heroine, physical yet mystical, ethereal yet earthy. (YouTube Screengrab)

Rishi Kapoor shares that the actress was a lot more effusive now than she had been during Nagina. ‘She had become the biggest female star and that had brought about a new confidence in her. Even her Hindi had improved which made her more communicative. There are many scenes in the Switzerland portion of the film like the “Cognac sharaab nahin hoti” sequence or the one where we both get ice creams that were completely improvised by Sridevi. She also had this habit of removing her make-up after every few shots and reapplying it. She always wanted to be at her best.’

For Rakesh Shrestha, creating that wall, covered with multiple images of Sridevi, had been nothing less than paying a tribute to the actress. The lensman had made sure to photograph her in as many moods as possible to design that famous collage. Those days, his own studio would also be plastered only with pictures of Sridevi, and other heroines landing up for a photo-shoot would be hardly pleased. Shrestha shares: ‘One day Amitabh-ji paid a visit and he too quipped, “You don’t have a single photo of mine on your studio wall?”’

Chandni means moonlight and Yash Chopra turns Sridevi into a goddess in white. There is a sequence in the film where Chandni is poetically picturized at different times of the day with Rohit’s voice fantasizing about her. The montage crystallizes into that iconic visual of Sridevi under a full moon on a bed of roses. As she sits draped in lustrous white, she becomes the quintessential Yash Chopra heroine, physical yet mystical, ethereal yet earthy. A symbol of shringara rasa, Sridevi here becomes a metaphor for Yash Chopra’s ideal woman, the template for the Yash Raj Films (YRF) heroine that the director would forever attempt to replicate with all his future leading ladies. Having never worn such subtle costumes before in any film, the actress told Stardust in 2012, how Chandni polished her aesthetic sense: ‘For the first time in my career, I worked with a director who gave as much importance to the looks and the costumes of his heroine as the script. I used to sit with Bhanu-ji and Yash-ji to finalize my costumes for every scene. Every day they would come and discuss the detailing of something as simple as a salwar kameez and I used to feel why he’s giving so much importance. It was only later that I understood why he was so particular about my look in every scene.’

But every full moon must wane. Soon tragedy strikes, driving a wedge between Chandni and Rohit. The helplessness Sridevi brings to her character as she watches her world crumbling around her is heartbreaking. She is especially moving in the scene where Chandni and Rohit part ways, conveying both pathos and fury with consummate ease. The second half sees her as a mere shadow of her former self. Chandni is quieter now, her silences more eloquent, her laughter more measured.

To illustrate how brilliantly she splits Chandni into two distinct halves, listen to how Rohit and Lalit describe her when they sing ‘Tu Mujhe Suna’. The former calls her chirpy who can gab all night, while the latter finds her a riddle who barely speaks. Both men celebrate polar opposite qualities of the same woman, reminding us of the sheer spectrum Sridevi was capable of. Chandni finally erupts when Rohit enters her life again. Talking about this moment to Filmfare in 1996, she again displayed the thinking actress that she was: ‘In the original scene there was elaborate romantic shayari but I wasn’t convinced. Finally, Yash-ji told me to go ahead and do exactly what I wanted. So, we did an unrehearsed scene, I just let go... blurting out the first thing that came to my mind.’

The sheer beauty of Sridevi powers every song of Chandni. Strolling through the Alps in diaphanous chiffons, her aura makes ‘Mitwa’ one of the finest love ballads from the YRF stable. Notice that it is Sridevi who starts the song and Rishi follows suit, the heroine serenading the hero. Interestingly, in the India Today interaction with [Raj] Chengappa in 1987, Rishi Kapoor had already predicted this: ‘I feel like a homosexual in her arms. It may not be long before she sings songs to me rather than vice versa.’

The song also established that no one quite filled a sari like Sridevi. That teenager who had strugged with the nine yards on the sets of Moondru Mudichu had now emerged as the cinematic icon for that garment. Rachel Dwyer, renowned author of Yash Chopra, says: ‘“Mitwa” is my favourite moment from Chandni. Her yellow sari is iconic like her blue chiffon in “Kaate Nahin Kat Te”. The saris themselves were nothing but the way she wore them and danced in them was something else.’

She further astounds you with her performance in the song ‘Main Sasural Nahin Jaungi’. A ceremonial number that pokes gentle fun at the in-laws, it is almost like watching a tableau of emoticons come alive on the screen as Sridevi invents a new expression for every relative. And the film’s chartbuster title track not only has Sridevi’s vivacity but also her vocals. After Sadma, she provides playback again, singing, ‘Main teri Chandni,’ in her trademark impish tone. While her accent had considerably worn off by now, she was still being censured for her voice quality. But rather than giving in to her critics, Sridevi goes and croons her heart out as if celebrating her imperfection, as if reminding everyone once more that it was fine to be flawed. In her 2012 interview with Stardust, she recalled those moments with Yash Chopra: ‘When he asked me to sing the title song, I was reluctant. But he insisted that I should sing. And later, while recording the song, when he heard me singing, he started feeling awkward and said, “Mujhe lagta hai isko chhod dete hain.” But then, I was not ready to go back. I said, “Yash-ji, ab nahin chhodna hai. Now I will sing it.”’