Some militant commanders even stopped firing rockets in her honour!

Afghanistan may be a war-torn country, but its people continue to watch and love Bollywood films. The sudden death of Indian actress Sridevi saddened Afghans outside and inside their homeland no end.

Thousands of her Afghan fans have mourned Sridevi's passing, pouring their hearts out on the social media.

Shaim Rahi, the admin of the Facebook page "Yadi Tu Kabul" and a Sridevi fan, wrote:

"Only a couple of days ago I shared a poster of the Hindi movie Khuda Gawah. I was a fan of hers and wanted to make a video clip about her movie. Unfortunately, I received the sad news of her death today."

Another fan, Khatol Abawi, a middle-aged woman, echoed similar sentiments. "I became her fan when I watched her movie Khuda Gawah, was shot in Afghanistan." 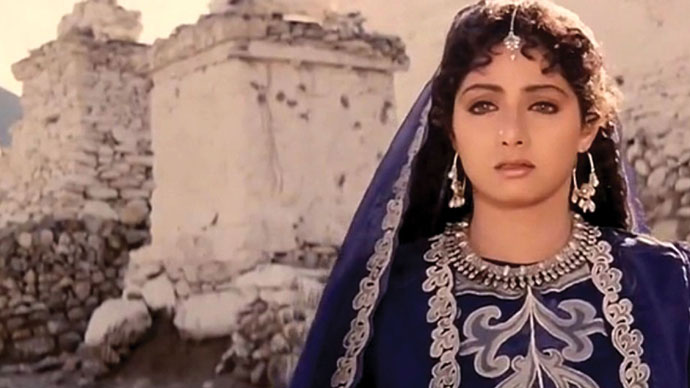 She became a symbol of peace for all of Kabul because her shooting entertained its people.

Yet another ardent admirer, Zmarialai recalled his memories about an embattled Kabul and the Sridevi film Khuda Gawah.

"When the capital was besieged for months by the so-called Mujahideen during the '90s and Kabul was being shelled every day by rockets.

Vulnerability, rockets, missiles, and cries and funerals were daily routines for the Kabuli people. During this time, some of Bollywood actors like Amitabh Bachchan had arrived in Mazari Sharif and later Kabul for the Khuda Gawah shooting. The Buzkashi game portion was shot at Mazari Sharif, in the northern part of Afghanistan. Khuda Gawah was filmed in several parts of Kabul. A part of the shooting took place on Kabul's Artal bridge. Sridevi never came to this side of the capital for filming sequences, but her name was known to the locals as if she had been there all along. In fact, Sridevi's name alone brought happiness and joy to the besieged residents of Kabul (at the time).

She became a symbol of peace for all of Kabul because her shooting entertained its people. Some militant commanders even stopped firing rockets in her honour! It came as a breather for local residents who could finally try and come out of their homes and buy some groceries for their families during the short time when there was a blanket of security owing to Sridevi's film.

On the other hand, religious fanatics gifted to the residents of Kabul rockets, bombs, killings, tragedy, orphans and sorrows."

"Sridevi was one of those humans the never made people cry... she made millions of people smile and laugh. She never brought tears to eyes," another emotional fan shared.

In addition to the Afghan social media community's outpouring of tributes for the actress, West-funded media like DW Pashto, BBC Pashto and Free Europe radio Pashto and VOA Pashto and Dari covered thousands of her fans' memories about her.

Afghanistan remains a country that has a small minority of Hindi-speaking people of Hindu and Sikh origin, yet most Afghans have learnt Hindi by watching Bollywood movies and listening to film music.

Also read: Why must we label Sridevi - the star - a lonely, unhappy woman?

#Kabul, #Sridevi, #Afghanistan
The views and opinions expressed in this article are those of the authors and do not necessarily reflect the official policy or position of DailyO.in or the India Today Group. The writers are solely responsible for any claims arising out of the contents of this article.

Freelance Afghan journalist based in the US.