If Taimur's pictures are up for sale, yes, I'm buying

Let's not kid ourselves. If Taimur is on a headline, we click

Not all parents just dote over their kids. Some dote — as well as sell them out. Case in point: Taimur.

Saif Ali Khan, whom most of us know as Taimur Ali Khan’s father, recently took social media by storm when he said he wants to 'sell' Taimur. Hold on, he didn’t mean it that way, but he meant it that way.

“Every producer I am working with has half-jokingly said, ‘can we put him?’” said Saif during a promotional event for his film Baazaar. Apparently, the producers wanted to dress up Taimur in white hair to look like Shakun Kothari, Saif’s character in the film. Earlier, producers of Kaalakaandi wanted to put rubber bands on his hair and so on and so forth.

In the same breath, Saif goes on to say that if anyone watching the interview wants to cast Taimur in a nappy ad, he’s available at a reasonable price. Of course, in this context, ‘reasonable’ means ‘exorbitant’ and why not?

Before you start shifting in your chair, ready to jump at the opportunity to claw Saif on his exhibition of poor parenting skills, let me remind you he was joking.

But even if it wasn’t, what’s the big deal? Isn’t Taimur already a commodity? 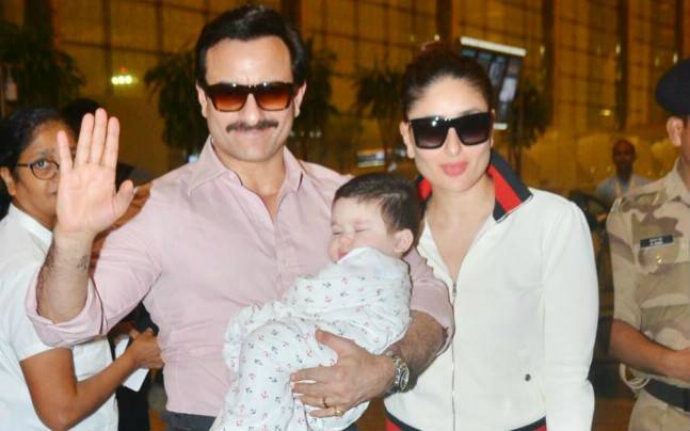 It's a Baazaar out there. And Saif knows Taimur can be sold! (Photo: India Today)

Let’s not kid ourselves here. We DO click on every news piece that has ‘Taimur’ in the headline. We scout our Instagram feed in the hope to discover unseen photos of the Chote Nawab on a sledge. We probably even have a Google alert set for every time there’s something new being said about the guy.

So, what is the problem if the parents make a few bucks while they're at it? If they deepen their already deep pockets a little more? And God knows they’ve already done that when Kareena sold her special ‘ehsaas’ plugging Prega News on the way.

“I’ll give him some cash for his education. And I’ll spend the rest. On holidays in Switzerland, yaar.” Saif goes on to say in the video.

Isn’t that a win-win situation for all of us? A holiday in Switzerland means more adorable pictures of Taimur for us to gorge on. Yay!

Of course, we could go on to discuss deeper, graver issues from this point onward — why are we as a nation so hung-up on a little boy? Why can’t we just let him have a normal childhood — but the truth is that the only reason you’d click on that op-ed is because you’re expecting to see many, many pictures of that fluffy marshmallow called Taimur. The truth is, Taimur will never really have a ‘normal’ childhood. And why should he? He’s after all the guy who broke the internet just by being named. He’s the reason why job portals have experienced a surge in searches for nanny jobs. He’s a beat in himself — Taimur beat. Obviously, ‘normal’ is boring when you can do this and more.

So, we might as well call a spade a spade. Let’s not pin this on Saif and Kareena for selling Taimur, let’s jolly well admit that Taimur sells because we buy him.

Also read: Finally, there's embargo on 'cute Taimur' photos: Why it's high time we gave Taimur his childhood back

Post your comment
#Bollywood, #Bollywood star kids, #Kareena Kapoor Khan, #Saif Ali Khan
The views and opinions expressed in this article are those of the authors and do not necessarily reflect the official policy or position of DailyO.in or the India Today Group. The writers are solely responsible for any claims arising out of the contents of this article.