For a group of under-30 lads, the spiritual experience influenced their music in many ways.

(The writer spoke to journalist Ajoy Bose, whose book Across the Universe is about to release this month. He recounts The Beatles' first trip to India, a memorable moment in time.)

Looking back at this memorable moment in time, one can safely say that the connection between The Beatles and India was one guided by destiny.

The three-year journey starts from the time when George Harrison picked up the sitar with curiosity quite accidentally. This led to Pandit Ravi Shankar entering his life, and their relationship is almost like a karmic one from a previous birth. Not only did Harrison get more interested in the sitar, he even went as far as becoming a Hindu.

After 1966, this connection deepened when his newly married wife Pattie Boyd was taken across India by Shankar. Together, they visited the Ajanta and Ellora caves where Pattie was astounded by naked figurines at a place of worship, Kashmir where they stayed in houseboats on the Dal Lake, and Varanasi where she was again astonished by the coexistence of life and death - its ghats where bodies burned, while life carried on as usual in its crowded bazaars mere metres away. While at Varanasi, the couple also got a chance to meet Ravi Shankar's own guru, Tat Baba. The meeting with this rural, ascetic figure in a sack cloth further blew Pattie's mind away, and deepened their involvement with Indian music and culture. Harrison was also drawn to mysticism and The Tibetan Book of the Dead.

In 1967, Pattie began taking transcendental meditation classes when Maharishi Mahesh Yogi came to London, after which he invited The Beatles for a seminar to Wales. Maharishi then invited them for advanced learning to his ashram at Rishikesh, where the band went after the death of its longtime mentor, father figure and manager Brian Epstein. Here, they were joined by other celebrities including Mia Farrow, who was recently divorced from Frank Sinatra; Mike Love, the lead singer of The Beach Boys; and Donovan, known popularly as the Bob Dylan of Scotland.

Needless to say, for a group of under-30 lads, the spiritual experience influenced their music in many ways. It has been described as "one of the most creative periods" in their career as it led them to reinvent themselves from pop stars to serious musical artists. While earlier their mainstay had been pop/love songs like "Love Me Do", "She Loves You" and "I Want to Hold Your Hand," a transformation of sorts took place in their style of music post the India trip.

Coincidentally, this was also the time when they realised what LSD could do to the mind, which led to a marked shift in the band's outlook. The burst of creative energy during their stint led the quartet to write some 30 to 40 songs - including soulful tracks like "Hey Jude"- many of which became part of the White Album (which came after Sgt Pepper's Lonely Hearts Club Band) as well as Abbey Road.

It was a time in their lives when Beatlemania had reached its peak. As they embraced Indian spirituality, their songs changed considerably - the band using Indian instruments like the sitar in its music. Many other rock bands, too, were inspired by The Beatles and began using the sitar in their music post the trip. The Liverpool Lads' trip, in a sense, turned out to be a "fantastic advertisement" for India, greatly changing western attitudes towards Indian spirituality.

It also coincided with a time when the band was coming out of a terribly heavy hard drug phase. The boys renounced much of their luxurious lifestyle at a time when they had attained god-like status. While there were some stray incidents of alcohol and drugs being smuggled into the ashram during their stay, overall, it was a detox of sorts for the members - and far from the debauched and decadent lifestyle of abusing their bodies that they were leading. As young rock stars, they felt good denying themselves the excess they had become so used to.

Even though the Fab Four had come to the ashram for a three-month long course, their "picnic at Rishikesh" as it is popularly known, ended rather abruptly and almost traumatically - with John Lennon falling in love with the Japanese performance artist Yoko Ono (while he was still married to and at the ashram with Cynthia Lennon) and wanting to return to London, Ringo Starr leaving within ten days, Paul McCartney within five weeks, and John Lennon and George Harrison leaving within eight weeks after a rumour reportedly created and spread by Magic Alex (an electronic whizkid who was close to Lennon and was apparently jealous of Maharishi) that the latter had made a pass at one of the American girls. The band later wrote a song called "Sexy Sadie" (Sexy Sadie, what have you done/You made a fool of everyone) about the alleged incident. Within two years of their India trip, the band had broken up.

Harrison is reportedly the only member who went on to become a disciple of the transcendental meditation movement as well as a donor to the cause. This year would also have been his 75th birthday (George had celebrated his 25th birthday with friends at the ashram).

Ajoy Bose's upcoming book Across the Universe (Penguin Random House) has been described as a journey exploring the "magic and mystery of The Beatles in India". Having been a political journalist and commentator for about four decades and having written two serious political books in the past - one about the Emergency and one a biography of Mayawati - Bose said it was a "huge pleasure and privilege to look beyond politics". The idea of the book was suggested to him by Penguin Random House; being a Beatles fan himself who had been fascinated for years by them, Bose grabbed the offer. 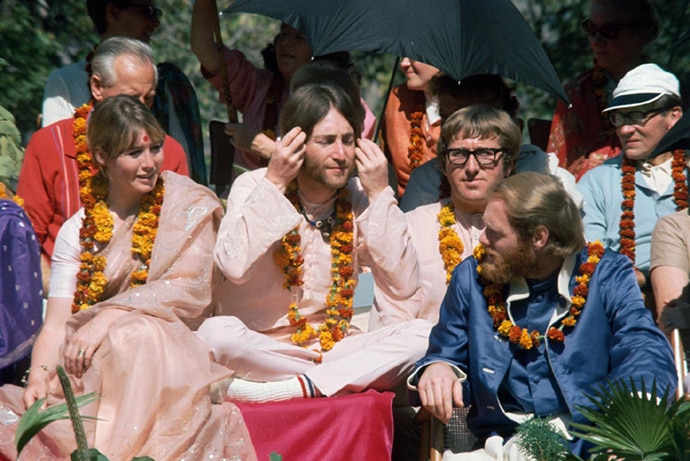 "The Beatles saga is an incredible modern fairytale," he says. The book gave him the chance to delve into the amazing '60s contemporary rock counterculture and its unique Indian connection. The time was interesting too, as it was about a post-colonial generation of Indians engaging with the post-World War western world. The amazing paradox for the generation of Indian teenagers (like Bose) at the time was that while The Beatles were seen as a modern-world symbol of revolt (youngsters wanted to grow their hair and look like them), The Beatles too were experimenting and revolting against their own world.

The book also develops an exceptional cast of universal characters. Maharishi Mahesh Yogi is a very interesting and powerful element in the book, and his journey is traced from Madhya Pradesh to the west - where he went for publicity and made a huge empire, particularly after The Beatles made him famous - going on to the US, the UK and Europe. Ravi Shankar is another important figure in the book, and Bose sketches his evolution over the years as the country's brand ambassador of culture.

While Across the Universe is slated to release in India sometime in the third week of February (with a tentative date of 19th February, 2018), a number of plans have been made to mark the golden jubilee of The Beatles' first visit to the nation. The Chaurasi Kutia Ashram, or The Beatles Ashram as it has come to be known, is going in for major renovation and repair work. Further, an information centre is being planned along with a new brochure and maps. On display will also be a sitar used by Indian classical musician Ravi Shankar that has been loaned by the Ravi Shankar Foundation. The

Uttarakhand state tourism department is also celebrating the 50th anniversary during the first three evenings of the International Yoga Festival in the first week of March.Further, the Rishikesh International Film Festival is organising a two-day event at the ashram to commemorate the 50th year of The Beatles' visit. Beginning March 16, the commemoration will see displays of photographs, presentations with slideshows, playing of songs and videos, transcendental meditation practice by schoolchildren, a ticketed tour of the ashram and a panel discussion centred on consciousness and creativity.

In their hometown, Liverpool, a museum called The Beatles Story will celebrate the 50th anniversary of The Beatles in India. The two-year exhibition will open on February 16 and includes memorabilia, photographs and personal accounts from people who were there with the band in 1968.

The exhibit will also feature photography by Paul Saltzman, who took some of the most iconic and intimate images of the band's time in India.

#Spirituality, #The Beatles
The views and opinions expressed in this article are those of the authors and do not necessarily reflect the official policy or position of DailyO.in or the India Today Group. The writers are solely responsible for any claims arising out of the contents of this article.