Why we must not give up on our local bookshops

I was probably eight or nine years old in the mid-90s, and a loyal reader and admirer of the Phantom and Tarzan comic strips, which were published in the local dailies at that time.

But I must have gotten bored of the narratives at one point, which is why I had decided to make my own comic by disturbing the chronology in which they were published, besides merging the two superhero stories together — such that Tarzan and  Phantom; both were part of the same large universe.

And once I was done putting them together, by rearranging the strips I had neatly cut out and stapling them in some inexplicable order (and considerably satisfied with this new creation), I wanted it to look like a real book.

So like most obnoxious kids, I started pestering my mother about it; and she, finding no immediate solution at hand, dropped me off at the nearest local bookstore one morning — run by people she knew well — and went to work. It was on that day that I learnt for the first time that a bookshop never sends you back empty-handed. There were three people running the store — which bore a rather rundown, dusty look, as if it already belonged to a time gone by — and one middle-aged gentleman out of them gave me a stool to sit on, heard me out, and promised me to speak to a binder he was friends with and get back to me. I trusted him with my months’ of hard work and left the strips behind with him, and about a month later, voila, I had a crisp red hardbound source of joy in my hands.

About three years later, the bookshop shut down.

I was about fifteen, and had skipped school for no particular reason other than the fact that it had been raining, and took refuge in a book-cum-toy store called Landmark in Calcutta. It was here, on this very day, that I discovered Gabriel García Márquez, who has remained with me as a permanent furniture in my mind’s home ever since. I sat in a corner of that store all day and finished reading one of his slimmest books (yes, I’m a slow reader), and was not asked to leave or if I plan to buy the copy even once. I permanently owe one of my favourite writers of all time to them. Bookshops are like a pair of warm gloves on steely January evenings; the self-care we all need today. (Photo: Reuters)

One of my dearest friends today in Delhi, where I moved about six years ago and now call home, is the owner of a pocket-sized bookshop with an enormous heart — Salim Bhai of Janpath’s New Bookland. He is always full of suggestions, ever willing to talk about books and writers from all around the world. On some days, I land up at his store not to buy anything, but just to have a conversation from which I’ll invariably learn something new.

This is why, as readers, we must nurture and protect our bookshops. Bookshops help build community, foster and encourage a culture of arguments and debate. I have heard stories from my mother how bookshops served as meeting spots when she was in college during a more tense period in Bengal, where student politicians and intellectuals would meet and organise their activities. They have served as meeting spots for friends and young lovers when we were growing up too. I know two of my friends met and fell for each other at a Crossword store in Calcutta, which no longer exists. 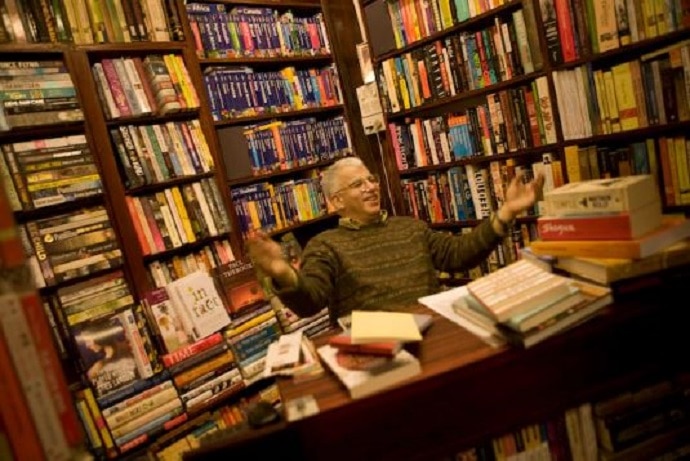 Fact and Fiction: I had rarely seen him leave his seat, but I knew that his eyes were watching the books I was picking up, and remembering. (Photo: DailyO)

Since I have moved to Delhi, I have seen two of my favourite bookshops close down — Fact & Fiction in Vasant Vihar and Spell & Bound in Safdurjung. Mr Singh, who owned Fact & Fiction, came across as a seemingly grumpy man often, but always pointed me towards shelves which housed new books of my interest. I had rarely seen him leave his seat, but every time I was in his store I knew that his eyes were watching the books I was picking up, and remembering. And Spell & Bound, apart from having a most varied collection in a limited space, had the most glorious stairway I have seen anywhere in this city in all this time, and also served the most delicious lemonade. Can we imagine Mussoorie without its legendary Cambridge Book Depot where Ruskin Bond still drops by to sign books and interact with readers of all ages on Saturdays?

Or Bangalore without Blossom Book House — three floors of any bibliophile’s paradise where I have heard many of my friends and acquaintances lose themselves in the smell of both used and new books?

Or try imagining some of the most-loved films without them.

I won't be able to love Notting Hill the same without The Travel Book Shop. (Photo: Twitter)

Imagine Notting Hill without Hugh Grant’s The Travel Book Shop or a version of You’ve Got Mail in which Meg Ryan owns a gun store instead of the magical The Shop Around the Corner. Don’t you love them a little less now?

Bookshops are like a pair of warm gloves on steely January evenings, an affectionate umbrella in August and an ice-cold kulfi in the heat of May.

Like most of us, I too enjoy the privilege and comfort of getting books home-delivered at the touch of a button at great discounts from a website owned by the richest man in the world.

But every now and then, we must step out in the sun and the rain and give our local bookstores a chance, and not allow them to dissipate such that they only exist as nostalgic emblems of our past. The complications our simpler lives have: We are alone, not part of a community. (Photo: Reuters)

We all know that reading opens new doors in our imaginations — bookshops are the door knobs.

With each passing year, our lives are getting simpler, thanks to new technology introduced in our lives by giant corporations.

But at the same time, this is also a period in our history when we need a lot of self-care. And books are the best and cheapest sources of self-care we have, and bookshops provide us a safe space to discover them. They are what help become the place we call our neighbourhood, our home.

Also Read: A book collector on how many books the bookshelves must give up