TM Krishna: The concert and the questions

In choosing to sing of all gods with passion, Krishna has evoked an age-old Indian tradition. He’s also left his critics fuming, which is a wonderful note to strike.

I must confess to being utterly confused about why TM Krishna was being attacked for singing Muslim and Christian devotional songs.

In the world of Hindustani classical music and Hindi cinema, we crossed that hump years ago — actually, it was not even a hump. Forget the Hindi cinema example of Mohammad Rafi belting out the most exquisite bhajans, written by Shakeel Badayuni, set to music by Naushad, there are any number of Muslim classical musicians who have expressed high praise and devotion to Hindu gods. Bollywood has a long and glorious history of Muslim artistes celebrating the Hindu divine. (Photo: YouTube)

This is a particularly important point to drive home in the context of culture wars, as it is the Muslim community that is accused of being insular and conservative.

The cleric, who often doubles as politician, is the stereotype rammed down our throats. But it is emphatically not so when we come to the world of arts, letters, music and poetry. Muslims have celebrated the culture of the land — be it of Hindu origin or Islamic. I can give you a laundry list of poets, writers, musicians, but let’s move to another point.

I do not know much about the history of Carnatic music or even about TM Krishna’s own battles with those who control the classical music scene in Chennai. With the context of Hindustani music as the backdrop, I did not understand why some people were so angry with him. My lapse in knowledge is particularly shameful as Krishna was the individual who released a Tamil translation of my first book, In Good Faith, at a modest ceremony that was part of a festival of vernacular languages in Delhi in 2015. Now that I have heard TM Krishna at an utterly memorable concert in Delhi on November 17, I understand why a well-known figure like him agreed to release that book — the theme was composite culture and syncretic traditions across the country.

It was sadly remiss of me to be so ignorant, particularly as I do believe that cultural battles are important ones to fight. The current socio-political-online ecosystem is also designed to change our culture. Many people who espouse composite cultures were raised in it, drawn from the poetry they heard, the classical music they patronised, the folk motifs they imbibed in their villages.

What Krishna is doing is far more courageous.

He is stepping out of the comfort of his own cosy world of upper-caste privilege and challenging it in every possible sense. He is expanding the repertoire, taking it to uncharted territories as great musicians do. In doing so, he has expanded the audience and introduced us to Carnatic music.

I shall henceforth be listening.

The repertoire for the Delhi concert itself was unbelievable. 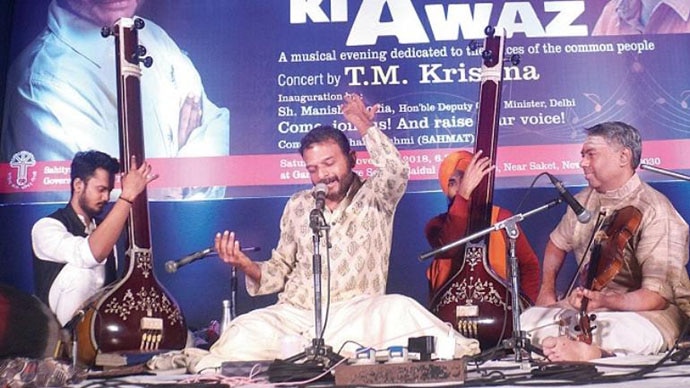 All the strands about composite culture have been taken to another level by TM Krishna, who also imbues this with an urgent need for social justice. This was not about singing one song about another faith; it is bigger than that — no wonder he has got the conservatives in a fix!

True power does not come from controlling others; the truly powerful challenge control.

In my view, TM Krishna is the single most powerful individual I have heard in a long time, and I’m not just referring to his vocal skills.

I also have a few questions for his critics:

*What is the problem with the repertoire? Is it ok for a Rashid Khan to sing of a Hindu goddess but not for a Tamil Brahmin to sing of Allah and Jesus Christ?

*Are you embarrassed when people write stories about Carnatic music with headlines such as “For Brahmins, By Brahmins” — or do you think that is how things should stay?

*Are you against the expansion of repertoire in musical traditions — and who decided anyway what can and cannot be sung?

*Some of you have written to me on social media saying Carnatic music is only about Hindu bhakti. If that is so, do you think what Krishna does is “polluting” Brahminism, Hinduism or Carnatic music?

*By that argument, do you think Sufi singers — the Manganiyars of Rajasthan, the Bauls of Bengal, the Qawwals of the Chisti tradition — who sing of other faiths and gods are therefore polluting Islam? Akbar loved it too: India’s tradition of syncretism is so old and so grand, all the little voices stay small before it. (Photo: YouTube/screengrab)

*And finally, don’t you think that Krishna has won this round because he is being large and expansive — while the critics just sound mean, small and diminished?

Intelligent, pithy answers — minus abuse — would be appreciated.

#TM Krishna, #Carnatic Music, #Syncretism, #Culture wars
The views and opinions expressed in this article are those of the authors and do not necessarily reflect the official policy or position of DailyO.in or the India Today Group. The writers are solely responsible for any claims arising out of the contents of this article.