The cretins vs composite culture

Now, as Faizabad becomes Ayodhya, the BJP has proven it is bereft of India's grand fusion traditions, of appreciating its melting poetry, its sharp syncretic wit.

The ancestral village to which my father and his siblings remain so attached lies in the heart of Awadh. Unchahar is the nearest railway station, to the village named Mustafabad, and my childhood memories also include the station-master regularly telephoning my father for lengthy conversations. Unchahar is the nearest railway station to Mustafabad. The village of my forefathers. Unchanged until now. (Photo: Google Maps/screenshot)

Yes, that’s where we are from: the lands where “Muslim-sounding” names must be erased.

I am a hybrid, a tough product of Delhi, so I do not indulge in sentiment and victimhood. But I quite understand the sorrow of those who had imagined an utterly different India. A few days after Faizabad went into the dustbin in government documentation and signage, (though it cannot be forgotten in popular memory and actual history), a video was circulated by friends on our social media links. One of them wrote that he felt like weeping on watching the clip. I too felt profoundly sad, although I have learnt to never shed tears on such matters.

In the clip, beautiful folk songs are sung with words such as: “Bhaj rasna har dam Ali Ali/ Sher-e-khuda ke Mahabali” (Sing bhajans in praise of Ali/ the Mahabali of the Prophet). These words were written and the tunes composed by a Sufi of Salon named Shah Naim Ata from the same region — and telling the context of the songs is my great grand-uncle, the late SM Mehdi, known as Mamujaan, play-wright, scholar, raconteur, who was close friends to many of the Urdu poets of early India, from Majrooh to Kaifi to Ali Sardar Jafri. My father makes a brief appearance too and tells of a verse that translates into “Allah, give my brother a son like Nand Lal.”

The family roots do indeed lie in a unique composite culture and syncretistic traditions. And no, it’s not a cliché that I speak about, but a lived and breathed way of life.

What’s in a name, one could ask?

Of course, one quite understands that it’s a continuation of the “fix and get after Muslims” syndrome. Make the Muslim vote irrelevant, make them the hate object to galvanise your own voters, harass Muslims for their diet, have a riot or two just to assert your domination in the toxic order of things, lynch one or two poor fellows, children to adult men. As a political analyst, I understand it’s all about politics. It’s all on video. But no, no-one lynched Pehlu Khan. (Photo: Twitter)

But what I do feel is a strange mix of contempt and pity for those whose inferiority complex is so acute about the cultural motifs, lilting poetry, and irreverence of Awadi culture that they see so much purpose in such vastly small-minded things.

Let’s face it — the cultural motifs that the current dispensation offers can never make for popular songs or romantic verse. So bereft of history and culture are they that they offer historical vendetta as their defining motif. I do feel a little sorry for them — although contempt is the over-riding response.

Through my growing years, roads and neighbourhoods were gradually renamed to get rid of symbols of British rule. Now, we have — categorically and unapologetically — moved on to removing anything that suggests ‘Muslim’ or ‘Islamic’ — although we continue to have the world’s third largest Muslim population. It’s happening with ferocity in Uttar Pradesh, where the matrix of language, culture, music, politics of identity and symbology is perhaps the most complex. 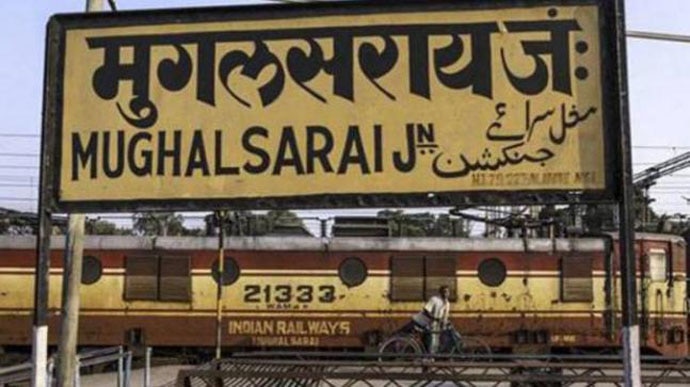 One of the most important priorities of the govt: to change this name. (Photo: India Today)

Hence, Mughalsarai that evokes medieval travel and rest in traditional sarais has become Deen Dayal Upadhyaya Junction. Agra, it has been demanded, should become Agrawal. When (and if) that happens, I will only start laughing out loud! The world-famous Taj Mahal of Agra (or is that Agrawal?) (Photo: Reuters)

Meanwhile, I have discovered another treasure from Awadh — a beautifully researched and illustrated book on a weekly from Lucknow published from 1877 to 1936, under a formidable editor, Munshi Sajjad Husain. That era of flourishing literary wit is long gone, but some things remain, and shall continue to do so. (Photo: Flipkart/screenshot)

In his work titled The Avadh Punch: Wit and Humour from Colonial North India (Niyogi Books, 2007), historian Mushirul Hasan writes that it was the first Indian newspaper to publish cartoons as we know them today, provided a platform for the greatest comic writers in Urdu and laid the foundation of the Urdu short story and a literary journalism. It’s embedded with delightful cartoons about the Congress of those days, British rulers, the clerics and the conservatives — even one about the cow being a symbol of conflict. Rishi Kapoor made his ‘Akbar Ilahabadi’ iconic. What would we call Akbar now? (Photo: YouTube)

That era of flourishing literary wit is long gone, decimated by the Partition and the subsequent death of the Urdu script in India.

But some things remained, as they shall continue to, in spite of the onslaught and the change of postal address.

Post your comment
#Faizabad, #Uttar Pradesh, #Name change, #BJP
The views and opinions expressed in this article are those of the authors and do not necessarily reflect the official policy or position of DailyO.in or the India Today Group. The writers are solely responsible for any claims arising out of the contents of this article.