Faizabad becomes Ayodhya: Why we are not surprised at all this time

Awadh’s first nawab Saadat Ali Khan, who built Faizabad in 1730, made no attempt to give any new name to Ayodhya.

It was no surprise when a day before Diwali, on November 6, Uttar Pradesh Chief Minister Yogi Adityanath renamed Faizabad as Ayodhya. We could see this coming as barely three weeks ago, he had renamed Allahabad as Prayag. After all, changing names of cities and localities has always been high on the list of priorities of the saffron-clad chief minister, whose entire politics has apparently hinged on symbolism and religious polarisation. 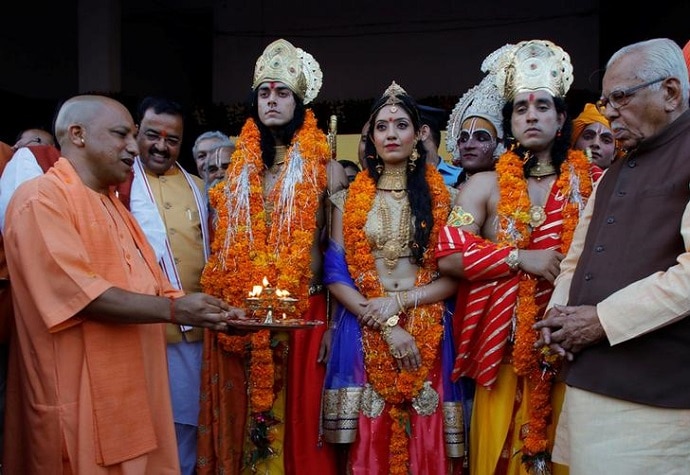 Yogi Adityanath's politics is apparently all about symbolism. (Photo: Reuters)

Even before he rode on to the coveted position of chief minister, Yogi Adityanath was better known for bulldozing his way to rename localities in his home and political bastion, Gorakhpur. Miyan Bazar was renamed ‘Maya Bazar’ and Humayunpur was rechristened as Hanumanpur during the days he was a member of Parliament from the city, named after the famous 11th century seer, Gorakhnath, whose temple trust Yogi Adityanath continues to head. No, you could not surprise us this time. (Photo: Reuters)

What good the change of name has done or would do to these localities or the cities is a million dollar question. But history shows that no matter how much some mediaeval rulers might have been condemned for their alleged religious intolerance, perhaps they were more tolerant that their 21st century counterparts.

Researchers have confirmed that both Prayag and Ayodhya have existed since the ancient times and no ruler ever attempted to rename them. 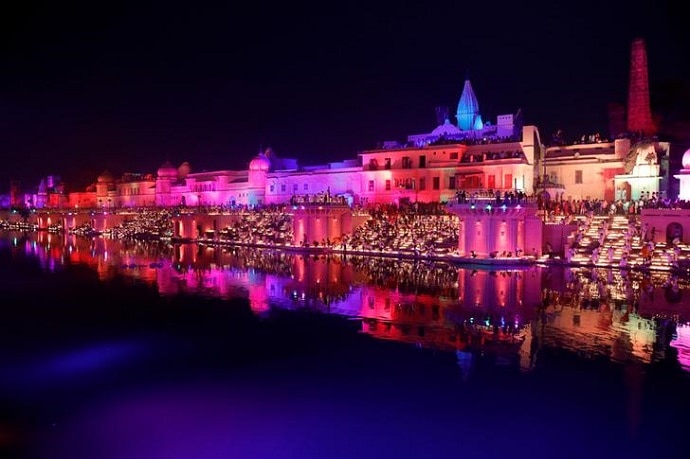 No ruler ever attempted to rename Ayodhya. (Photo: Reuters)

Sixteenth century Mughal emperor Akbar, who built the city of ‘Illahabas’ (abode of the divine) that got converted to the anglicised Allahabad during the British regime, never even attempted to rename Prayag that was always recognised as the town around the holy ‘Sangam’ (confluence of the Ganga, Yamuna and the mythical Saraswati rivers).

Likewise, Awadh’s first nawab Saadat Ali Khan, who built Faizabad on the banks of the Ghaghra river in 1730, made no attempt to give any new name to Ayodhya that was always known as the birthplace of Lord Ram. The ancient temple town eventually became a part of Faizabad district, carved out by the British. 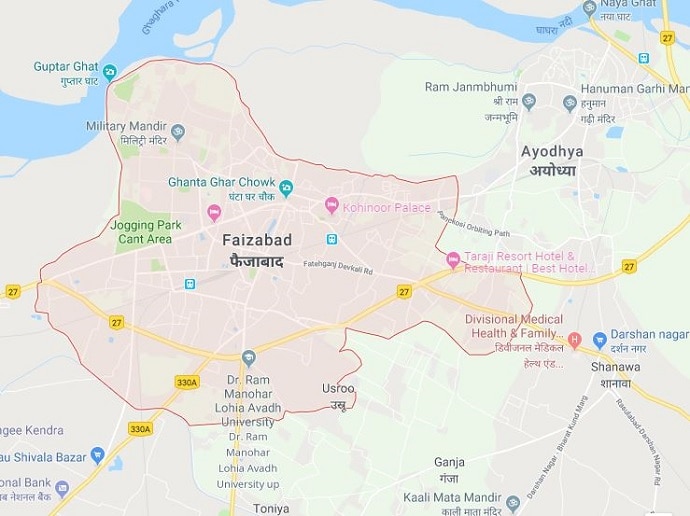 Why not make Ayodhya a separate district? (Google map)

Ayodhya thrived as a popular Hindu pilgrimage destination and all its economic activity centred around religious tourism. Historical records have confirmed that the funding for the maintenance and upkeep of Ayodhya’s oldest temple — Hanuman Garhi — came from the Nawab’s treasury. This healthy practice continued even after Saadat ali Khan’s grandson Asaf Ud-daula shifted the capital of Awadh from Faizabad to Lucknow, soon after he inherited the throne in 1775. And significantly, just as ‘Illahabas’ meant ‘abode of the divine’, Faizabad meant a ‘place for the good of all’

Both these cases clearly reflect the high tolerance levels of the two rulers, whose secular credentials also stand certified on the same account. Sure enough, if they had no concern for the sentiment of the local Hindu population, they could have easily imposed their arbitrary will on their subjects and changed the names of the two ancient towns. Instead, they chose to build new cities in the neighbourhood of the old towns. 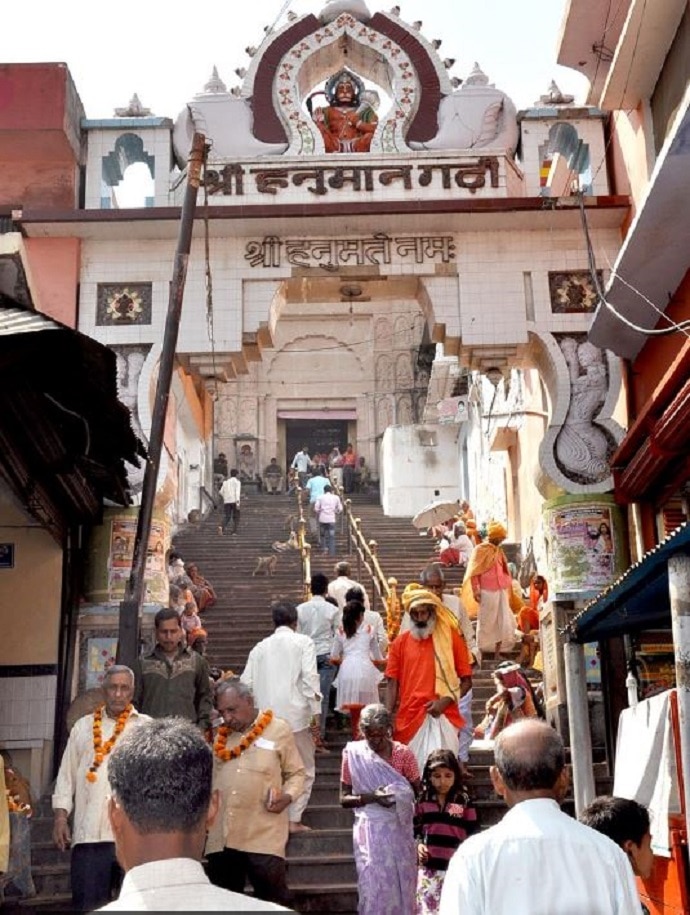 On the contrary, the present UP chief minister apparently chose to rename Allahabad and Faizabad, without taking into account anybody’s sentiment. Some even suspect that the decision was taken only to spite a certain section of the society, which arouses doubts about the sincerity behind his much-touted “sabka sath-sabka vikas” slogan.

If it were to be believed that the move would give a socio-economic boost to these two places, then what stopped the government from carving out both Prayag and Ayodhya as independent districts by chopping away some bit from their respective bordering districts?

In fact, that was how new districts were usually created. Gulab Bari — the tomb of Nawab Shuja-Ud Daula — in Faizabad. (Photo: UP Tourism)

Such action could have kept the glory of both the ancient historic names of Ayodhya and Prayag, without erasing the names of Allahabad and Faizabad.

In the bargain, the government could have also saved a huge amount of taxpayers' money that will go into effecting the consequent changes in the government records — institutions and stationary etc.

Guptar ghat, in Faizabad, on the bank of the river Saryu is believed to be the spot where Lord Rama took Jal Samadhi. (Photo: UP Tourism)

Ironically, the BJP leadership was very critical of then Samajwadi Party chief minister Akhilesh Yadav, when he took a unilateral decision to change the names of the new districts created by his predecessor Mayawati in the names of different dalit icons.

Evidently, the change from Faizabad to Ayodhya has not amused those who were anxiously awaiting some concrete action on the Ram temple promise, when sometime back Yogi Adityanath declared that he was going to bring some “good news” to Ayodhya on this Diwali.

Even the added announcement of getting a huge statue of Lord Ram installed at the Ram Katha park in Ayodhya is no compensation for those who have looked up to the BJP as the party that will build their much-awaited Ram temple at the disputed Ramjanmbhoomi-Babri Masjid site .

However, the only purpose that the rechristening could serve is to polarise the electorate. And who cares if that is achieved through a display of intolerance!

Post your comment
#Prayagraj, #Yogi Adityanath, #Name change, #Ayodhya
The views and opinions expressed in this article are those of the authors and do not necessarily reflect the official policy or position of DailyO.in or the India Today Group. The writers are solely responsible for any claims arising out of the contents of this article.