Why our political parties romanticise poverty

A politics of hand-outs hasn’t removed poverty from India. It has embedded it even more deeply. Narendra Modi was elected to end this politics. He is now following it.

Going by the flurry of economic freebies being announced and promised by politicians across the political spectrum, it is quite clear that regardless of who wins the forthcoming General Elections, the Indian economy is going to go nowhere.

One promises quotas for EWS sections. The other, a minimum income guarantee. Who's paying? (Photo: Reuters)

This is not to mean that the economy will tank and become a basket case. That will probably not happen, not because the political class or the state machinery won’t let it happen, but because despite their best efforts to bankrupt and destroy the economy, it has reached a point where the damage they can do is being offset by a natural momentum that will keep the economy moving.

But anyone harbouring dreams and visions of India going on a high trajectory of growth is going to end up badly disappointed.

The promise that candidate Narendra Modi represented, of sweeping reforms that would break the chains keeping the productive energies of the people of India in captivity, has been betrayed by Prime Minister Narendra Modi’s preference for saffron socialism. In fact, one sartorial blunder — the monogrammed suit — and the devastating jibe that followed — ‘suit boot ki sarkar’ — destroyed virtually every reform impulse in the Modi government to unshackle the entrepreneurial spirit of Indians. This is not to say that the Modi government didn’t undertake any major reform — GST, Insolvency and Bankruptcy Code were significant achievements. There were also some labour and other reforms undertaken. But mostly, the government tinkered around with the institutional stranglehold (read rent-seeking bureaucracy and government machinery, including the rapacious taxman, regulator, inspector) that constitutes the biggest obstacle and greatest disincentive to businesses.

The ambitious Make in India programme was, nay, is a great idea — but why would anyone want to make in India when it is such a headache, or, if you will, nightmare, to set up a factory in India?

It is far easier and cheaper to import (from China) than to make in India.

Ask any businessman if the extortion s/he suffers from all sorts of government agencies has reduced in the last four and a half years — the answer will be, nothing has changed.

They are still hounded, they still have to pay, even if they follow the book, which in itself is mission impossible. If they somehow manage to manoeuvre through the maze of laws, rules and regulations, and avoid the minefields and traps laid at every step, and become successful, they are not feted but treated like criminals, virtual lepers. Every politician, every bureaucrat, every two-bit inspector wants to squeeze something out of the businessman — but no one wants to be associated or seen standing with him.

In India, if anyone deserves a Bharat Ratna, it is the entrepreneur, who, despite all the odds stacked up against him, manages to make a profit, or at least keep his head above the water. The Modi Sarkar has quite simply failed to make any difference in the predicament in which the Indian businessman finds himself every single day. The businessman and the productive segments of society, the wealth creators and employment generators are the proverbial hen that lays the golden eggs, or, if you are given to Hindu symbolism, the Kamadhenu cow that will keep giving, no matter how badly you treat it. It is a system that revels in extractive economics, rewards the intermediary (or dalal) instead of industry, enriches those with nuisance value instead of those who create real value and thrives on perverse incentives. 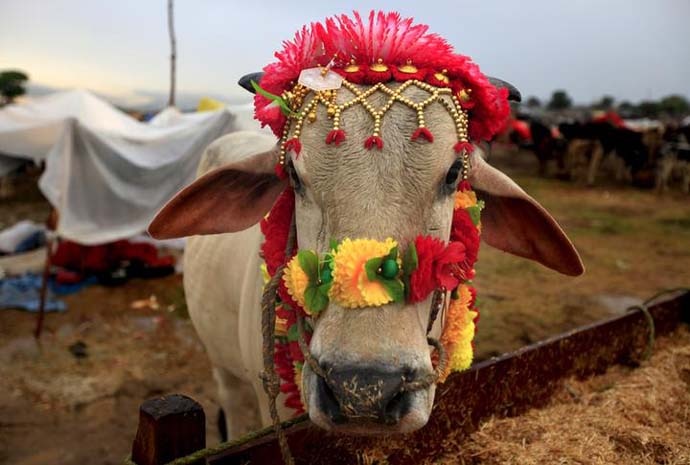 Business persons are treated rather like kamdhenu cow in India. (Photo: Reuters)

The simple truth that somehow escapes all political leaders is that the only way they can deliver on their promises of creating jobs is by facilitating, promoting and incentivising businesses, not just SMEs but also big corporations.

But if you hobble the productive sections of society and impose on them exploitative and extractive charges, then all you are left is quotas/reservations and MGNREGA to woo the voter.

The fact that instead of making MGNREGA redundant — Prime Minister Narendra Modi held up MGNREGA as a symbol of the shambolic economic policy framework of the Congress party — the NDA government has doubled down on it is in itself an admittance of failure.

The economic failure of the Modi government is also apparent from the fact that the ruling party is now trying to cement its votes not on the basis of having delivered on its developmental programme and creating jobs and prosperity for farmers, artisans, labour — but on the basis of caste and communal consolidation. The party apparatchiks might still pay lip-service to ‘vikas’ and throw around figures of 7%+ growth, but there is hardly anyone who is convinced that the economy is booming. Virtually every businessman — big, medium or small — is unhappy and complaining that business is down.

Meanwhile, despite tom-tomming all the allocations made for the agriculture sector, the farmer’s lot remains what it has always been. In fact, over the last 70 years, every government declares how much it loves the Indian farmer, how much it cares for him, how many billions it is spending on him, etc.

And yet, in all these decades, the farmer is as badly off as he has always been, rural poverty and lack of employment and opportunities as debilitating as they have always been. Clearly, the same old trick is not working, and yet, successive governments keep doing the same thing over and over again, thinking something will change. Guess what? It isn’t going to happen and the policy-makers need to rethink the entire plan for improving the lot of the rural sector, not by giving sops like loan write-offs or employment and income guarantees, but by giving alternatives and creating opportunities. 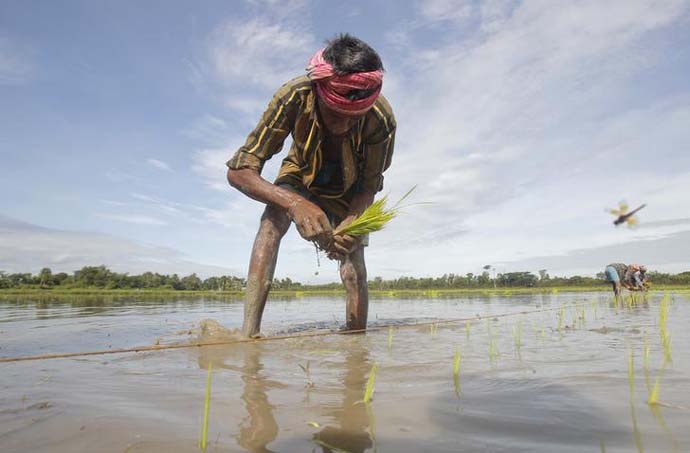 Despite all the schemes, how come the Indian farmer remains as badly off as ever? (Photo: Reuters)

The tragedy is that it is not just the NDA that is besotted with romanticising poverty. The opposition UPA, and even more, the caste/region-based parties are just as enamoured of povertarianism as the ruling combine. India is now hostage to 'bhakts' and 'darbaris' who will indulge in the most bizarre intellectual gymnastics to justify their leader’s, or deity’s, voodoo economics.

It doesn’t matter if you are a Harvard graduate or the product of the Hindutva school of economics — the Swadeshi Jagran Manch-type of economist whose knowledge of economics is still 18th Century mercantilism. You will rationalise the most outrageous and unviable schemes because that’s what the dear leader or great leader has proposed.

Therefore, regardless of who wins the next election, India is condemned to the sort of hare-brained economic policy-making that has impoverished this country.

That this will happen in a country which, civilisationally and culturally, has celebrated wealth, even worshipped it, is nothing less than a travesty, if not a tragedy. Povertarian policies will only embed poverty — not alleviate it. But explaining this to the politicians is akin to butting your head against the wall. Modi won the 2014 election not because he promised sops and doles, but because he promised a systemic change which would unleash the productive energies of the people.

Five years later, he has fallen back on the same tired, old and failed Congress prescription of handouts — which ultimately do not add up to anything. His rivals, of course, are promising the moon without any idea of how to pay the bill for their promises.

The only way this can be done is by killing the hen that lays the golden eggs, or slaying the Kamadhenu cow. So come June, be ready for the economic guillotine.

#Lok Sabha election 2019, #Narendra Modi, #Piyush Goyal, #Union budget 2019
The views and opinions expressed in this article are those of the authors and do not necessarily reflect the official policy or position of DailyO.in or the India Today Group. The writers are solely responsible for any claims arising out of the contents of this article.