Cyrus Mistry had never managed a boss. He was a great CEO but his biggest mistake perhaps was that he didn't manage Ratan Tata. But he told me if he had done so, he would have lost respect for himself," says Nirmalya Kumar, a then London Business School academic who was hired by Mistry to advise him on corporate affairs as member of Tata Sons' group executive council. Until, of course, he was infamously fired along with Mistry, chairman of Tata Sons since 2012, in the morning of the long knives in 2016.

His honest, witty and open recounting of events in a subsequent blog (I Just Got Fired!) made news and in the succeeding months provided some clarity to what was clearly an unfortunate turn of events. 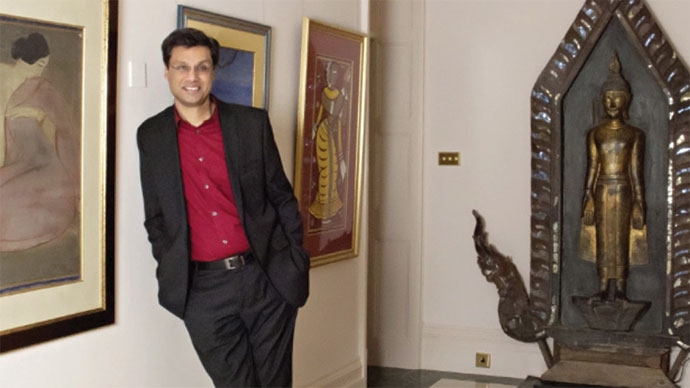 A good leader has to have followers who believe he or she will take them places. Photo: Nirmalya Kumar

He ascribes the crisis in the corporate world to unhappiness about money. "Money can make you unhappy in two ways. If you spend more than you earn or if you compare yourself with others," he says, referring to a long line of recent disgraces beginning with former McKInsey CEO Rajat Gupta and ending with ICICI MD Chanda Kochchar.

One of the greatest lessons from the Tata battle for him is that there needs to be succession planning. "We are very poor in succession planning because we don't want to let go." Why it doesn't happen according to him is because "our economic value is deeply linked to our social and personal value whether we are in the corporate world, sports arena, film industry or politics. We shouldn't let who we are be defined by what position we have. I'll tell you a small story. When I was with Tata Sons I would get five wedding invitations a day. When I was fired it became zero. That's why people cling to power because their entire social capital is linked to their economic and political capital".

Here he speaks to Kaveree Bamzai about the five attributes of modern managers:

Business schools have been grappling with this question, what makes a great leader, since the time they began. In the initial years, all research suggested that leadership was all about personality traits, a very seductive proposition, until everyone very quickly realised it wasn't going anywhere and said leadership was about behaviour not personalities. But then a seminal work by Rob Goffee and Garteh Jones, Why Should Anyone Be Led By You: What It Takes To Be An Authentic Leader changed that perception to a leader being someone who has followers. So here's what a good leader should have:

A good leader has to have followers who believe he or she will take them places. A leader cannot be self-absorbed. Like the Buddha they have to emancipate and energise the followers on the path they cannot find on their own. It is not about us, it is about them.

When people get to power they are observant about the cues other people give them, whether around them or ahead of them. When people get into positions of power, they feel they don't need to read other people's cues any more. Their EQ declines and they lose empathy. They lose some of the attributes that got them to power and often become totally focused on the task. They forget that in some or most tasks, you need to carry your people with you.

The old idea that you could lead only if you had power has fallen into disrepute. You can lead based on your charisma, expertise and information. What remains when you don't have the power to punish and reward? You become naked. All you have is your persuasive power. You have to use it.

Earlier, leaders were those who had access to all the information. But with the democratisation of facts, power has become less hierarchical. The command and control leadership is melting away to a more informal, networked and collaborative leadership. So earlier if you showed how good you were by following what your leader said, now you did so by questioning, by innovating.

Increasingly in the western world, there is a rebellion against the ethos of "male, pale, and stale". This manifests itself in the #MeToo movement. Leadership has to be more inclusive now, has to be more diverse, whether by ethnicity, gender or nationality.

Such a leader is expected to take better decisions, in collaboration with others; is more likely to build a consensus. Decision making may take slightly longer and have certain higher transaction costs but it is fairer, more widely accepted and reflecting all interest groups. So the leader of today has to encourage disagreement and diversity of thought. This is difficult because CEOs tend to surround themselves by those who don't voice dissent. That's one of the reasons I used to tell Cyrus, please don't give your opinion until the end of the meeting.

All good leaders need to have truth whisperers around them. Also, the leaders of today have to be lifelong learners. They have to be open, curious and seeking to find which truths to believe in. They have to challenge themselves to overcome the inherent limited lifespan.