How India can stop the rupee's slide

New Delhi needs to increase exports and find a way to improve its Current Account Deficit.

The sudden slide of the rupee this year has caught everyone by surprise. The depreciation of the currency by more than 10 per cent in a matter of eight months is unprecedented. The government has declared that it is due to “external factors” beyond its control and the fuel price hike is due to increased oil prices which has put increased pressure on the balance of payments and caused the rupee to slide further. Let us look at this explanation in detail. 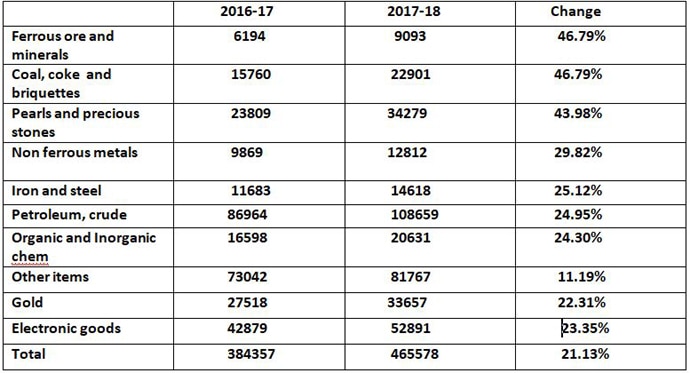 The total growth in imports for 2017-18 as compared to 2016-17 is $81,221 million. Out of this total, the growth of petroleum, crude is $21,695 million. This is due to the rise in crude prices and an increase in oil consumption. But this accounts for only 26.71 per cent of the increase in imports. Thus we can conclude that while oil is one of the factors causing a surge in imports, it accounts for only 26 per cent and that there are other items too where imports are rising rapidly.

When we talk about Current Account Deficit we must also look at exports. This is where the main problem lies. Our exports in 2013-14 were $312.35 billion and our exports in 2017-18 were $303.76 billion dollars. There has been no growth in exports at all in last four years. Slack in exports could be the unseen reason resulting in depreciation of the rupee at the first sight of surging imports. Why have our exports not grown in the last four years? The last two years have seen a healthy world economy but we have not been able to reap the benefits. Has our industry become less competitive? The government has increased custom duties on a large number of items so as to protect the domestic industry. This could be because we are losing our competitive edge. This strategy of protecting inefficient domestic industry is likely to boomerang in the long run. We have experienced it in the past.

There are signs that our manufacturing sector is languishing and needs a push. We have been unable to compete in labor-intensive exports for a long time. The reasons are known to the policymakers. Labor reforms are needed and taxation policies need to be looked at.

No country can grow with a healthy clip without a robust export growth. India’s export growth between 2004 and 2008 was 25 per cent. We have done it in the past. We can do it again. This is the way to have a healthy Current Account Deficit. Defensive tactics like trying to curb imports have always failed in the long run. Let us be bold and meet the challenge head-on.

Also Read: Why National Herald should be a Harvard Business School case study

#Dollar, #Diesel, #Current account deficit, #Oil
The views and opinions expressed in this article are those of the authors and do not necessarily reflect the official policy or position of DailyO.in or the India Today Group. The writers are solely responsible for any claims arising out of the contents of this article.