People in Sri Lanka are dropping dead standing in queues, food inflation has surged to 25% and school exams have been cancelled. But the 3 brothers in the Sri Lankan government are yet to ask for help from the IMF.

In the past few months, rare adversities have become painfully normal for Sri Lankans. Sri Lankans are facing their worst nightmare ever with a new normal that looks like hours of daily power cuts, buying expensive fuel after hours of waiting, and heavy inflation (both food and otherwise). The situation is that of sudden mayhem for civilians.

The situation has given rise to an uprising, with several turning up for protests against the pathetic management by the government. The pictures tell a scary tale.

Supporter of Sri Lanka's main opposition burn placards and a coffin during a protest outside the president's office in Colombo, Sri Lanka #lka pic.twitter.com/Ym2nQRvXVc

SO HOW DID THINGS BECOME SO BAD IN SRI LANKA? Sri Lanka has been an Agri based and tourism-dependent country. About 10% of its GDP comes from tourism. But Sri Lankans saw a major shift in 2020-21 as the pandemic restricted tourists from visiting Sri Lanka, thus reducing their foreign currency inflow substantially.

Also, the Sri Lankan government was obsessed with overturning the chemical fertilizer-dependent agricultural system into creating an organic Agri system. An overnight decision to completely switch to organic fertilizers without effective implementation of providing knowledge, assistance and alternatives led to a reduction in productivity & revenues that came from it. Let's just say Sri Lanka witnessed a man-made disaster.

WHY DID THE FOREX RESERVES FALL?

Sri Lanka's forex reserves have been majorly drained because it has been paying off its previous external debt that it took to rebuild its economy, which was battered by the civil war between the majority Buddhist Sinhalese and Tamil minority Hindus.

When it comes to tourism, about 30% of visitors in 2021 were from Russia, Ukraine, Poland and Belarus. Now given the brutal war between Ukraine and Russia, this might stop too. Sri Lanka's earnings from tourism in 2019 were $3.6 billion and have come down to less than a fifth in two years.

Sri Lanka has previously borrowed from foreign countries like China, to keep itself afloat during the Covid 19 pandemic. And it is doing so again by taking credit from China and India. Sri Lanka depends on imports for a lot of its essential items and has historically used the money made from tourism to finance its imports, like every other tourism-dependent country.

But the trickle of foreign currency coming into the country and rising expenses like debt repayment and a rising cost of oil in the international market has depleted Lanka's tijori. Sri Lanka has about $2 billion in its forex reserves and about $7 billion to be repaid in the year 2022.

Sri Lanka borrowed about $2.8 billion from China to keep itself afloat during the pandemic and was due to repay the amount in 2022. But since Lanka is going through a worse time now, it has asked for another $2.5 billion in assistance from China of which $1 billion would be a loan (to repay the previous loan) and $1.5 billion would be a credit line. The Sri Lankan Rupee has depreciated twice in the span of seven days by Rs. 57 against the US Dollar. This has made the cost of oil and gasoline products dearer by an equivalent amount per litre.

Also, the Russia-Ukraine war has only made things worse. As oil and gas prices have surged in the Western countries, importing oil has soared beyond expectations and become more expensive for the already khaali Sri Lankan pockets.

Wild swings in the oil market continues with the Russia-Ukraine conflictOil (Brent) has surged over 20% within a week, adding to Sri Lanka's economic woes#Oilprices #SriLanka #EconomicCrisisLK pic.twitter.com/5BwtZUq3RA

A look at the recent moves by state-run Ceylon Petroleum Corporation (CPC) and Lanka IOC (LIOC) tells you that from 12th March and 11th March 2022, respectively, fuel prices rose to unimaginable highs. Ashoka Ranwala, the President of the Petroleum General Employees' Union, mentioned that they had to shut down the only oil refinery in Colombo as crude oil stocks ran out.

The queues at petrol pumps have only been growing longer and currently, Lankans are spending at least 3-5 hours to get their hands on fuel. Recently, two people dropped dead while standing in queues to buy oil. This has caused the government to deploy army men on petrol stations so that petrol and kerosene oil is distributed fairly and there is no stockpiling and black market gimmicks.

Navagamuwa Police OIC provides ice creams and water to quench the thirst of the residents of the area who had been waiting hours in gas queues.Respect ❤#LKA #SriLanka #EconomicCrisisLK Image via Lankadeepa pic.twitter.com/Rnn1dGnGFb

2. Exams for about 3 million students have been cancelled as Sri Lanka cannot currently pay for imported printed paper.

3. To stop unnecessary costs, Sri Lankan embassies at Oslo and Baghdad have closed down and another at Sydney is expected to close down. But since Australia has reopened its borders after long, this may not happen. 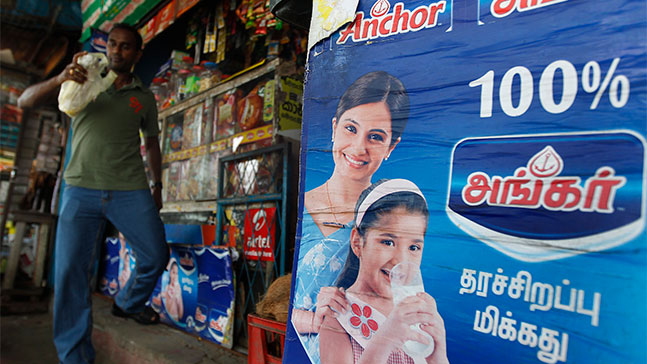 Not so happy times for milk lovers. Photo: Reuters

5. There have been reports of people fleeing the country, illegally seeking entry in Tamil Nadu. Ethnic communities are trying to flee Sri Lanka to get out of 2 kilometre long fuel queues and rising costs.

#SwiftOperationToday, in the morning hours, @IndiaCoastGuard apprehended 06 Sri Lankan nationals including 03 children from the fourth island near #Rameshwaram #TamilNadu. They were trying to migrate illegally from #SriLanka to #India through a #boat.@DefenceMinIndia @MEAIndia pic.twitter.com/AgnDBt1zaE

NOW, WHO WILL BAIL SRI LANKA OUT?

For now, it's going to be the bajuwale bhaiyas: China and India.

Sri Lanka has turned to debt restructuring and barter exchanges to survive the crisis and has also sought help from its neighbours, China and India, to bail it out of the murky situation.

It has asked for $2.5 billion assistance from China, of which $1 billion is a credit line and $1.5 billion in currency swap. This is in addition to the $2.8 billion loan assistance by China during Covid-19.

India has also agreed to give a $1 billion credit facility to help Sri Lanka pay for food, medicines and essentials.

Though it's pretty late, Sri Lanka will now seek help from the IMF to rescue itself.

#Oil and gas prices, #Sri lanka economic crisis, #Sri lanka man made crisis, #Srilanka crisis
The views and opinions expressed in this article are those of the authors and do not necessarily reflect the official policy or position of DailyO.in or the India Today Group. The writers are solely responsible for any claims arising out of the contents of this article.