Why exports are at odds with PM Modi's global outreach

Abjuring all diplomatic rhetoric, global polity has come to the trade age, or the trade war age, as it should be called.

Since US president Donald Trump, unlike his predecessors, can go to any extent to protect US trade, he has virtually pushed the world to tackle trade diplomacy with war-level seriousness. Thus, it is not unusual that India and China, the economic and strategic rivals, have reciprocated to each other on reducing trade tariffs in a bhai-bhai fashion, keeping the Doklam issue aside. China to reduce tariffs on 8,549 types of goods from India

Whatsoever symbolisms, verbal craft and clichés diplomacy may possess, much of the essence of foreign policy rests upon successful transactions between the domestic and the international markets. The accomplishment of a foreign policy of a big nation like India lies in its success in global trade, particularly exports, which are necessary to fetch valuable foreign exchange for imports.

The Modi government’s diplomatic campaigns were exceptional and aggressive, which makes one wonder what went wrong with India's exports in the last four years of the Modi rule.

As India stares at five years' high trade deficit, it was not strange that in the recent meeting of Niti Aayog, the noticeably concerned PM Modi gave a call to boost the sagging exports. Exports have accounted for up to 19 per cent of India's GDP and about 40 per cent of it comes from small industries, thus making it a crucial sector for growth in jobs. The world trade has grown at a faster pace.

India's export slowdown is particularly alarming because global growth has staged a strong rebound by clocking 3.2 per cent and 3.7 per cent growth in 2016 and 2017 respectively.

The IMF estimates that in 2018, the world economy will grow at the rate of 3.9 per cent.

The world trade has grown at a faster pace.  For the first time in last ten years, the world trade growth crossed the average annual rate of 3 per cent, growing at the speed of 4.7 per cent  in 2017 against 2.4 per cent in 2016.

India failed to take advantage of this surge in the world trade. Over the last four years, India’s merchandise export floundered badly. The exports, which in the two years preceding 2013 grew by 40 per cent and 22 per cent, were hovering between negative and 5 per cent in the subsequent five years.

India's exports grew barely at 10 per cent in 2017-18, substantially lower than that of the competing peers like Thailand, Malaysia, Indonesia, South Korea.

In last five years, China has strategically started moving out from the export of cheap goods (garments, shoes and toys) by concentrating more on products of medium or high technology. Thus, the low-tech export market is moving to countries like Vietnam and Bangladesh.

India is losing its lead in the sectors where it used to enjoy advantage in raw material and labour.

Vietnam and Bangladesh are occupying larger market share of footwear and garments, according to a recent Crisil report.

Export of auto parts and engineering goods have also clocked a slowdown in recent years.

Precisely, at the moment when Indian export needed a boost, note ban and GST dealt a double blow to it. Consequently, the share of exports in the GDP fell to the lowest in 2017-18 in 15 years. The maximum decline came from the labour-intensive sectors such as cloth, leather and jewellery. 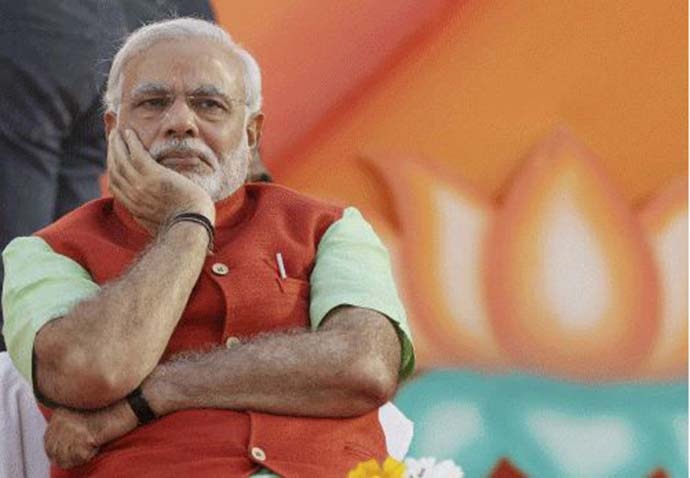 It is mysterious that despite PM Modi’s relentless efforts to connect with the world, India failed to get an export boost

India's export recession is a critical comment on the loud Make-in-India campaign. India has survived with FPI flows into share market and low oil prices, otherwise the export would not have sufficed to meet our foreign exchange needs.

It is mysterious that despite PM Modi’s relentless efforts to connect with the world amid a positive world market, India failed to get an export boost to its traditional markets, let alone the access to the new markets.

In last four years, India’s trade openness (the sum of exports and imports to GDP) has declined significantly. Trade openness is an indicator of the economy’s participation in the global trade. It was at 27 per cent in 2016, according to the IMF database, compared to an all-time high of 43 per cent in 2012.

It seems that something has seriously gone wrong with India's trade diplomacy. India's diplomatic mailbox was brimming with fresh offers of free trade, investment opportunities and renewal of old deals since PM Modi came to power.

However, buckling under the pressure of promoting "swadeshi", the foreign trade policy of the Modi government remained meek and ambivalent. Strong rupee and economic disruptions also added to the export woes. Before India could anticipate, US-China trade war exploded on the world's face. Thus, the prospects of India becoming a globally competitive exporter have turned bleaker. India's trade deficit ballooned to $16.61 billion in June 2018, at 61-month high. Of late, exports have shown feeble signs of recovery on the back of sagging rupee. However, rising crude prices and inflation are here to neutralise the gains. The IMF forecasts that in years ahead, imports will decrease in the US and Europe, two major markets for India.

Arvind Subramanian, economist and the outgoing Chief Economic Advisor, is bidding adieu with a valuable advice that clocking 8-9 per cent GDP growth will be difficult, if Indian exports don't grow by at least 15 per cent per annum.

Also read: How elections will decide the fate of GST

#GDP, #Make in India, #Export, #Economy
The views and opinions expressed in this article are those of the authors and do not necessarily reflect the official policy or position of DailyO.in or the India Today Group. The writers are solely responsible for any claims arising out of the contents of this article.