In What Women Want, a 2000 film, when advertising executive and alpha-male Nick Marshall (Mel Gibson) is asked to come up with copy for a line of feminine products, he uses an at-home waxing kit in order to understand the average female consumer. The pain from waxing and an electric shock from a hair-dryer give Marshall the supernatural ability to tap into the innermost thoughts of all women.

It seems Chetan Bhagat was inspired by the film because he, too, got waxed to "figure out girls" for his latest novel One Indian Girl.

Even if one ignores that waxing is something men increasingly get done too (and not just the metrosexual kind); a man getting waxed to understand women is like a woman shaving her head to understand men. The book's "feminist" protagonist, Radhika Mehta, sees waxing as the first step in her metamorphosis from a nerdy moth into a seductive butterfly.

So far so bad.

The central plot of this novel, Bhagat's seventh, is how successful women like Radhika have difficulty in finding men who aren't threatened by her success. She states in the opening chapter that the reader won't like her because, "One, I make a lot of money. Two, I have an opinion on everything. Three, I've had sex. Now if I was a guy you would be okay with all of this. But since I'm a girl these three things don't really make me too likeable do they?" 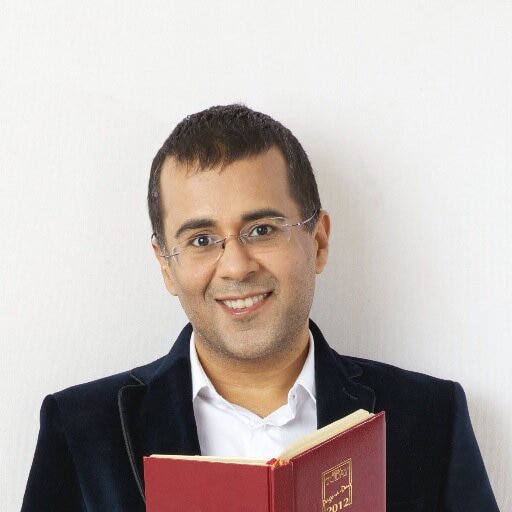 According to Bhagat all Indian women need a swayamvar to make their mind up.

Radhika's oh-so-cool candour could have been admirable if it were only present elsewhere in the book. This opener made for a good hook in the blurb and in the novel's promos, but unfortunately, the rest of the novel sees her grovelling to men in her life. You know those girls who constantly claim that "I'm not like other girls! I drink, smoke and party!"? Radhika's faux bravado is just as annoying. Even more grating is the way she keeps rattling on and on about her achievements and being a "nerd". You know who don't call themselves a nerd? Nerds.

Her job in the Distressed Debt department at Goldman Sachs is where her character really begins to take shape. If I had a penny for every time I saw Goldman Sachs being mentioned or praised (sample: "I sat in the plush business-class seat, courtesy my bank, the only one in the world that seemed to care about me"), I could start a hedge fund. Bhagat worked at Goldman for a decade, so I'm sure that the heroine of his novel working at the Best Company in the World is just a coincidence.

You can tell that this is a book written by an IIM graduate because, at times, it seems like a vehicle for product placement. The characters don't just take a flight, they fly Cathay Pacific. The coffee is Starbucks. The lingerie is Triumph. The hotels are Marriott and Shangri-La. The restaurants are Dishoom, Harry's and Nerai. Flower bouquets from Armani. The gym wear is Nike. In Bhagat's puerile imagination, even a romantic walk in Central Park requires a mention of the Apple store.

These brands are, perhaps, supposed to be markers of Radhika's success but their incessant mention only makes one hate her for her affluenza. In the novel American Psycho, Bret Easton Ellis shows his protagonist's brand loyalty as a symptom of his neurosis and urban malaise. Chetan Bhagat appears to mention the brands to showcase his taste for the High Life; by making his character an overachiever, he is actually stroking his own ego.

Despite her huge salary (which is always converted to Indian rupees to hit home her success when compared to her Indian peers), Radhika is always fishing for compliments or validation from her lovers and family. She shoots down potential suitors because she doesn't want to marry people who have middle class businesses such as restaurants or pharmacies. As a reader, you don't find her unlikable because she has sex or makes money or has opinions but because she has become a stuck-up snob who has forgotten her humble roots.

In his previous books, Bhagat presents the middle class Indian male as a sensitive type who just wants to hang out with his friends and get married to a nice girl after studying in premier education institutions. In One Indian Girl, he had to chuck the middle class humility in order to accommodate a strong, independent woman. But this experiment seems to have failed because this strong, independent woman is as big a douche bag as the strong, independent men she rallies against. Besides, the book is ridiculous in the way everyone is constantly congratulating Radhika for coming up with strategies that a Class 10 Commerce student could come up with.

You can't call your book "feminist" just because it features a woman. If Radhika is a feminist then why did she agree to an arranged marriage in the first place? Where was her feminism when she was getting waxed only to please a man? Where was the feminism when she kept moving between cities to get away from men? And finally when her prospective groom mansplains to her that feminism is misguided and that the correct term is humanist, why does she agree with him?

In the end, it doesn't matter whether Radhika is a feminist or nerd or an investment banker because, according to Bhagat, all Indian women need a swayamvar to make their mind up.

Another cringeworthy aspect is how Radhika keeps referring to herself and the other women as "sluts" (sample: "Rather be a spent and finished slut than a good but frustrated Indian girl."). This is in poor taste because the author is trivialising the term. In the few sex scenes (which are reminiscent of two mannequins making out), Radhika is at the disposal of men, whether they are Bengali Communist intellectuals or married men who are nearly double her age.

Radhika's feminism is all bark and no bite because she is the creation of Chetan Bhagat aka Mr I-don't-see-why-odd-even-rule-doesn't-apply-to-women. Because the book is essentially a man's perspective on women (much like Sex and the City), it only ends up damaging the female perspective with its empty rhetoric and talk of lingerie, champagne and Romedy Now romance. This paint-by-numbers feminism is made even more cardboard with Bhagat conveniently using a nervous, tomboyish figure whom he can turn into a confident swan in the span of 272 pages. The Bell Jar it mostly certainly isn't.

You know that irritating guy who completely sides with your wife/girlfriend when the two of you are having an argument? He will invariably say stuff like, "Women are the future" or "We wouldn't last one day as women" or my personal favourite, "Women are complex creatures", to win brownie points because he is a turd. Suddenly, your partner looks at you and says "why can't you be more like him?" etc etc. In writing this novel, Chetan Bhagat is being that guy because female-centric books turn into female-centric films.

The fact that Kangana Ranaut was at the book launch and claimed to have cried at some parts of the book says everything you need to know. It's just a shame that we have arrived at this strange junction where it takes the male vantage point of an Amitabh Bachchan or Chetan Bhagat to dish feminism to women.

I don't hate Chetan Bhagat, I just hate everything he stands for. I hate his cabbage mediocrity masquerading as populism. I hate how he has fooled a whole generation of readers into reading terrible books. Most of all, I hate his Seth Ghanshyam Das smile; it's the kind of smile that is missing on the faces of most writers because they are busy writing something of substance as opposed to making appearances on Nach Baliye.

The film director John Waters once said, "If you go home with somebody, and they don't have books, don't f*ck them". I wonder what John's stance would be on people who have Chetan Bhagat books.

#Indian Women, #Books, #Sexism, #An Indian Girl
The views and opinions expressed in this article are those of the authors and do not necessarily reflect the official policy or position of DailyO.in or the India Today Group. The writers are solely responsible for any claims arising out of the contents of this article.