Till the lockdown ceases and the infections subside, we have no choice but to remain at home and it’s probably for the better. However, there is always a bright side to things.

With the Covid-19 television addresses by Mr Modi, I think a part of me is genuinely quite inquisitive as to what the next group activity is going to be. We are already done with banging utensils and lighting lamps. I mean for all you know, next could be making TikTok videos or doing cartwheels like that Sundrop Oil kid in the advertisement.

Considering the free time most people have nowadays, many channels have unleashed old shows from their archives and have also boosted their TRP ratings in doing so.

Before Doordarshan relaunched old shows, we were stuck between legendary classics Apmaan ki Aag and South film Don No 1. Watching either of which could lead to suicidal tendencies or at least deep introspection about your planetary existence. 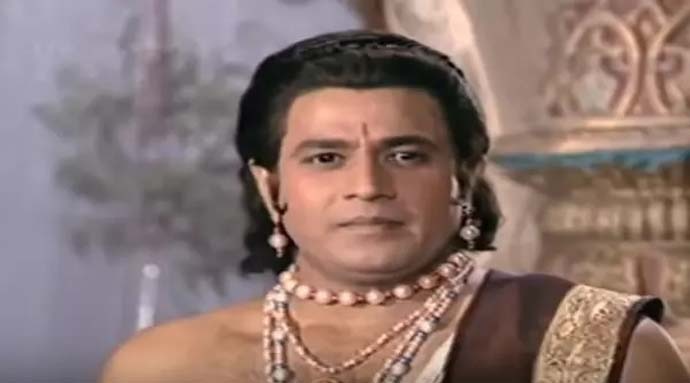 In the first episode itself, how does Lord Ram go from newborn to grown-up man so soon? (Photo: Screengrab)

Watching Ramayana again over the past few weeks has sparked some critical questions which I didn’t quite think of as a kid. In the first episode itself, how does Lord Ram go from newborn to a grown-up man so soon? With all due respect, why does Jatayu look so demotivated while flapping his wings? Did he not receive his paycheque in time?

Also, I have noticed a trend that whenever one character is plotting against the other one, there is this particular background score they play, so as audiences, we know something fishy is going on. When you come to think of it, this makes day-to-day living so simple. You don’t need to do any of the friend-or-foe guesswork. Would be such a boon if we could have this in personal and corporate life too. For all you know, in an alternate universe, maybe my grocery guy is an assassin in disguise and plotting against me for not bringing exact change.

The other good thing that transpired through the show was really how they address each other with an avalanche of adjectives. Hope to take a lesson or two from it before returning to the office: "Oh mighty visionary of budgets, conqueror of Excel sheets, Tax evasion prodigy, how can this earthling be of any service to you today?"

The RBI has launched a moratorium for EMIs due for three months (March-May) and agreed that it is a very well-thought decision to ease the burden on borrowers, but it really scores low on the fun element.

I had personally expected a bit more from the RBI governor, Mr Shaktikanta Das, at least going by his past records. Like the time during demonetisation, he would make daily announcements on what citizens could buy with old currency notes. Each day would be full of surprises. You know, like today you can spend money on butter chicken and buy silver bracelets like the ones worn by Salman Khan. Tomorrow you can spend money on medicines and ugly showpieces. During demonetisation, Mr Shaktikanta Das would make daily announcements on what citizens could buy with old currency notes. (Photo: Reuters)

As Indians, our true joy lies in beating the system to our advantage. You see standard rules and procedures are for mere mortals; legends have it otherwise.

This whole moratorium process is way too clean for us. So now the government expects us to just simply log on to our bank’s website and apply for a moratorium. It doesn’t require bribing any clerk or bank official at all. I mean the least they could do is have cricket matches between bank managers and customers like the one in Aamir Khan’s film — Lagaan — to waive off the pending dues owed to the bank.

The government has exempted essential services from the lockdown. I read an article from Chandigarh, where many residents in some posh colonies were in deep anguish that they were unable to get ‘necessary’ rations such as strawberries, bell peppers, broccoli, kiwi, etc from local stores. It's precisely this insensitivity which reminds me of the famous line from the French revolution, “If they have no bread, let them eat cake,” which eventually led to the toppling of the monarchy.

Many residents even went ahead to use their influential connections to source their exotic grocery requirements.

It’s really appalling to know that in a world which is falling apart with human misery at its zenith, there are mortals among us that crave for broccoli out of all good things on this planet.

The Work From Home concept has picked up the heat in the past few weeks amid the lockdown. Some very HR-centric organisations have even taken it to the next level by asking employees to dress up creatively and join virtual meetings. I don’t know, but watching your senior management in panda costumes should surely leave you with some rather disturbing memories.

Nowadays, many of us face a rather pivotal conundrum, which is — how should one even look busy at work while at home. For example, at the remote signs of spotting me killing time online, I get asked by my family to clean the fans. How else will I be able to justify my productivity? Hope to add accomplishments such as 'Brinjal-peeling Ninja' to my LinkedIn bio soon.

Till the lockdown ceases and the infections subside, we have no choice but to remain at home and it’s probably for the better. However, there is always a bright side to things. Never before in the history of mankind did we ever win a war wearing pyjamas and were still called heroic. Carpe Diem!

Also read: Looking for information on coronavirus? Wikipedia it