The imagined conversation between Donald Trump and Kim Jong-Un

When Donald Trump meets Kim Jong-un for the first time ever after years of being “frenemies” on Twitter, history will be made. Will there be chemistry too with the North Korean Supreme Leader, given that US President Trump has said he can tell in one minute about these things? And what will the two talk about, after they've compared notes on bad haircuts, fake news, Dennis Rodman and hamburgers? Here's what the conversation could sound like.

Donald Trump: So “Little Rocket Man”, I mean “Sick Puppy”, I mean Kim; I can't tell you how delighted I am to finally meet you. Singapore is great, there's excitement in the air, and this is going to be huge.

Kim Jong-un: That you Great POTUS who was once “The Great Dotard”. I am a big fan of Celebrity Apprentice.

Trump: That's great to know. I'm sorry Ivanka couldn't come but that last time she stood in for me at a G-20 meeting, the fake news media went to town. Speaking of fake news, did you see the fake photograph Angela's office tweeted?

Kim: Yes I did and that's why I wanted Dennis Rodman to sit in on the meeting with me. I thought we'd have an independent photo angle. 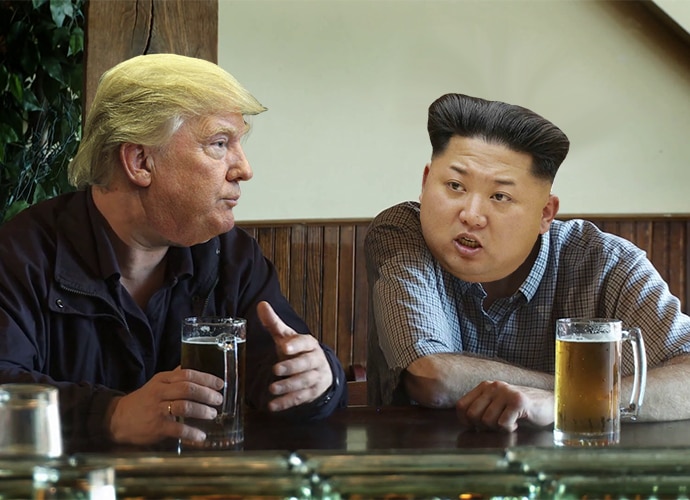 Trump: I'm sorry it's not been a very good week for me. I am so mad at that nasty woman Angela — I'm glad I refused to shake her hand when she came to the White House. You know I could hear her but chose to ignore her — that's what she gets by trying to become leader of the free world while I am around. Didn't anyone tell her the job is fit only for a man? As for Emmanuel, after all I did for him, even brushing the dandruff off his suit and complementing his wife (she's in such good shape, don't you agree), he went and called me incoherent and inconsistent. And I've already told the world what I think of Justin. To stab me in the back like that. You know I didn't trust him from the moment I shook hands with him. Trying to show me up by grabbing my shoulder when I'm yanking at his hand! All I did was withdraw from international agreements like the terrible Iran nuclear deal and the Paris climate accord. When everyone I know has told me climate change is a con job and a myth.

Kim: So where is Melania? I was so looking forward to meeting her. I love her pantsuits. So different from that Michelle Obama who just wouldn't stop showing off her muscular arms in her flirty sleeveless dresses.

Trump: Speaking of muscular, what's with the running bodyguards Kim? Is that a good idea?

Kim: Yes, it's a great way to keep fit. It's a new sport in North Korea. They run, I watch.

Trump: But hey Kim, did you have to fly Air China? You know I'm not a great fan of that nation. Don't trust them. Now, Russia, Russia is another thing altogether.

Kim: Speaking of Russia, what did the Fox News guy say when he said tomorrow's meeting is between two dictators? I don't know of a greater democrat than myself.

Trump: I was surprised myself. Something I will have to take up personally with Rupert.

Kim: So what's the agenda? De-nuclearisation? Lifting of sanctions? Golf?

Trump: No golf. I only play when I'm on Trump property. If I find something nice in Singapore I'll tell Donald Jr to buy it.

Kim: So Donald, may I call you Donald? It's been more than a minute already. You said you'd tell if I was serious in a minute. That it's your touch, your feel. What do you think?

Trump: I think it'll be worth investing time in you. But tell me, what do you think of Vladimir? That's the true test. I told those jokers in G7 to let Russia in. Being thrown out for invading Crimea. Where on earth is that? Can you see it from Alaska?

Kim: I like Vladimir, I find him very open and very honourable, especially when he's helping us with our nuclear programme.

Trump: Yes, he's a great guy, great guy. I like your style too. I think you're much smarter than people give you credit for. And I like that you're strong. I liked how you were so firm with your uncle and regent Jang Song Taek (he was shot by a firing squad in 2013 and described quite poetically as despicable human scum) and your half brother Kim Jong Nam (he ordered a deadly nerve agent attack on him in 2017 at Kuala Lumpur airport). Unfortunately if you do things like that in the US, they cite human rights violations.

Trump: Oh something for fake news commentators to go on about. I like to mute their voices when I watch them at night eating my cheeseburger in the White House bedroom.

Kim: Which reminds me you promised me a hamburger.

Trump: Oh right. That's great. You remember what I said in a rally in Atlanta in 2016? That we'd meet over a hamburger?

Kim: Of course. I remember everything. You know I can tell you know because we're friends but I have entire departments tracking your every word. And my wife is a big fan.

Trump: By the way where's Ri Sol Ju? I was looking for her. Where is she?

Trump: That's great, Ivanka will be there though I can't vouch for Jared Kushner given the level of his security clearance.

Kim: While we're talking of relatives, did you see my little sister Kim Yo Jong at the Winter Olympics? In North Korea the press calls her Ivanka.

Trump: Well, I'd love a great free press like your country. In my country, they just call Ivanka all sorts of names.

Kim: I really don't think you should tolerate them. That's why I've kept my nuclear weapons handy. It's quite useful as a deterrent against enemies at home too. As are prison camps. And firing squads. And famines, which my father loved.

Trump: By the way what are we going to do with the Nobel Peace Prize when we get it? Split it?

Kim: I'd like to be very open and very honourable about that. I'd like to keep it for myself. They can't give it to two world leaders with bad haircuts. Plus Barack Obama already has one.

Trump: That is true, that is true. By the way, before we leave, can we discuss how I can deal with Robert De Niro? Any suggestions?

Kim: Let's discuss it at Mar-a-Lago when I pitch a seat in your Cabinet for Dennis Rodman. And now, let me shake your tiny, tiny hand O Great POTUS. And a happy birthday for tomorrow. If you'd come to Pyongyang I'd have thrown you a military parade.