Ooops, he did it again! How Pakistan's Imran Khan is a gift of embarrassments that just keeps giving!

He was being referred to as 'Pakistan's Pappu'. But with his latest Olympic-size gaffes, Imran Khan has left that tag far behind!

So, for those of you who might have been living under a rock and missed all the foot-in-mouth moments Imran Khan's recently had, let us fill you in.

The reputed Oxford graduate (also PM of 'Naya Pakistan'), Imran Khan, recently met the Saudi King Salman. He greeted him — except, instead of speaking to him directly, Khan spoke to the translator standing by the King. The Saudi royal was visibly taken aback, particularly since Imran Khan skipped making much eye-contact with the King.

But wait! It doesn’t just stop here. After disrespecting the King by not addressing him directly, Imran Khan did something even a Rahul Gandhi, whom he's often compared to, wouldn’t — he walked right off. Yes, after addressing the translator, Imran Khan just walked off, without giving the Saudi King even a chance to respond.

In the video, you can see the King and the translator left visibly shaken after this bizarre encounter:

When I saw this, I couldn’t help but take grave offence on behalf of the Saudis as well. Pakistan is persona non-grata with most honourable nations of the world. Many countries recently backed the UNSC's moves to declare its favourite non-state actors, Hafiz Saeed and Masood Azhar, as global terrorists. Most shun the nation that's now standing at the brink of complete financial collapse.

Saudi Arabia is the only exception, along with China, of nations willing to at least politely host and hear the Pakistanis.

And this is what PM Imran does!

Twitter was even quicker than me to take offense.

Someone should teach little bit ethics of Diplomacy to this man. Meanwhile, it is heard that the Saudi king has cancelled meeting with Imran Khan because of his nonsensical attitude.I though wish that it’s just a rumour since we have to beg a lot more pic.twitter.com/iT13BzdQvc

This is beyond insulting. PM Imran Khan enters, says something to King Salman, walks out casually before the interpreter translates and the King responds. I'd suggest the "selection committee" to teach diplomatic manners when they select PM of Pakistan. pic.twitter.com/ACIJpFzZeF

Imran Khan said something to His Majesty King Salman bin Abdulaziz, walked out and left the interpreter to translate for the King. This is a hilarious sight. 😂😂😂 pic.twitter.com/RkllQDJH0r

But this Olympic-level faux pas wasn't even it! Imran Khan recently gave his own ‘twist’ to world history when he, at the Organization of Islamic Corporation (OIC), said that no one had blamed the ‘Japanese religion’ when Japan launched Kamikaze attacks on its enemies in the Second World War. (Of course, how he pronounced 'Kamikaze' made it clear he could have attended Oxford — but he sure wasn't attending his classes).

New history with PM Imran Khan, "When the Japanese in the in Second World War indulged in kamikaze..when pilots who blew themselves up on American ships but no one blamed Japanese religion for it." Discuss. pic.twitter.com/44aDDnGLkX

As many frustrated Pakistanis demanded, Imran, what do you even mean by ‘Japanese religion’? Ever heard someone say ‘Pakistani religion’ or ‘American religion’? For God’s sake, you're the Prime Minister of a nation! Yes, one having a total breakdown — which is clearly starting at the top. So you know, Shinto and Buddhism are Japan's dominant religions. Mind clarifying which one you were referring to?

And even in the haze that seems to have descended, you do remember how the US retaliated to Japan’s attacks in World War II, right? It led finally to an atom bomb. So much for anyone taking Kamichameleon, sorry, Kamikaze attacks lightly. 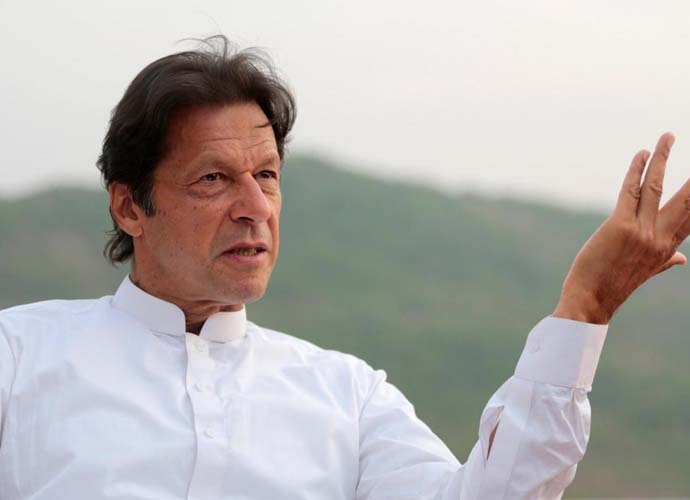 Only recently though, Imran Khan had made a shocking claim that Germany and Japan shared borders.

If his country's situation wasn't so grim, honestly, Imran Khan could make Pakistan grin. As it is though, major misses, like ignoring the Saudi King, could only push Pakistan closer to that deep, dark edge.

Also Read: In Pakistan, the voter living in dark houses and broken streets has the power to make or break the government