Virgin Bride: How Kanak Sarkar 'unsealed' the bottle and let out 'miso-genie'!

Hold on. We don’t mean desh ki Sarkar (although we can totally see why you went there).

We’re talking about Kanak Sarkar, a professor of Jadavpur University in Kolkata.

No, we shouldn’t have started on such a childish, borderline-crass note, but there’s little else that Mr Sarkar evokes after one reads his now-deleted-but-nothing-is-ever-off-social-media Facebook post about ‘virgin brides’.

‘Hard’ is the operative word here, for the ‘harder’ he bats, the ‘harder’ it gets for him. In more ways than one. 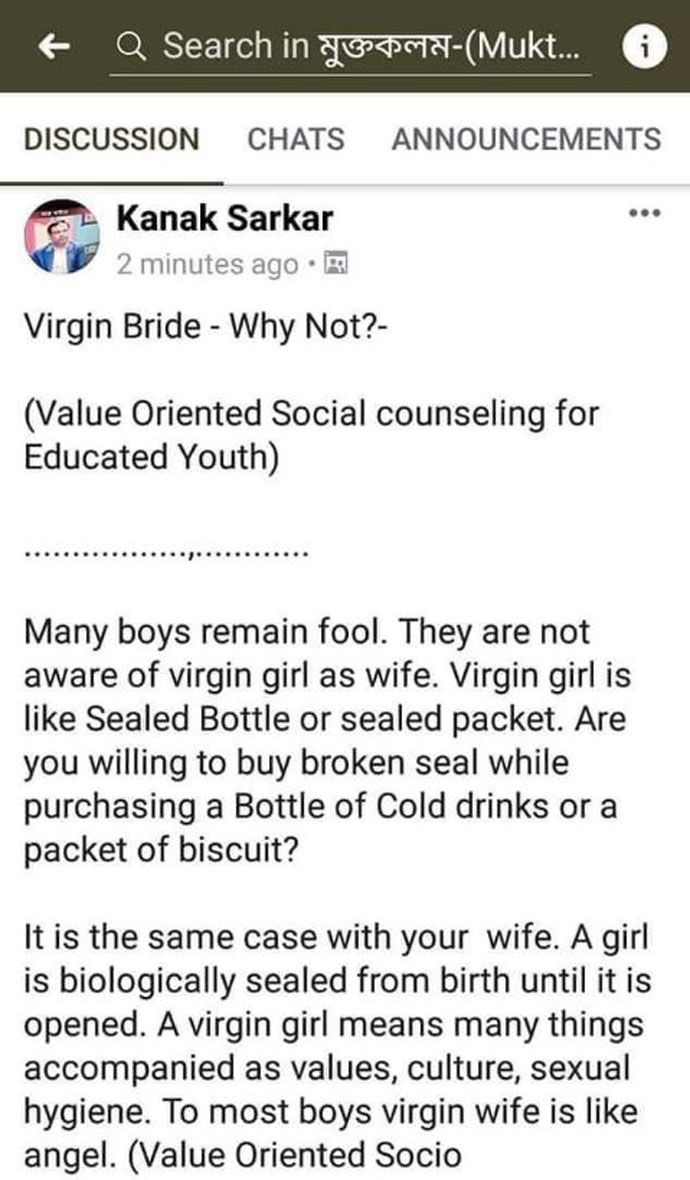 “Are you willing to buy a broken seal while purchasing a bottle of cold drink or a packet of biscuits?” asks Sarkar. Of course, the answer is ‘no.’ The government’s ‘Jaago, Grahak Jaago’ campaign has taught us to always check for seals, and the manufacture and expiry dates of packaged products we pick up at the store.

This analogy, however crowd-pleasing it may be, doesn’t apply to human beings though.

We are sure. For if it did, we could have returned Mr Kanak Sarkar’s brain and mouth to store, calling these ‘faulty’, and even demand a refund.

But the problem is not that he said something like this, and we reacted in an obviously outraged manner.

The problem is, he has an audience — for starters, his students at the university, and then, a very large and significant section of society.

One of whom we saw cause a storm in a Koffee cup recently.

Another spoke in front a full house and even as he did not outright challenge two of the Supreme Court’s recent rulings — on homosexuality and adultery — he did end up making it amply clear that he isn't overly bothered about either. (Just as he doesn't think women should be in fighting positions in the army. Oh no).

Yet another who once, during a news channel interview where he barely spoke, evoking amnesia, managed to remember only two words: women's empowerment, now seems to find it odd that a famously '56-inch-chested man' would not be a 'mayn', man, and would rather hide behind a mere ‘mahila.’ Men like these have shown us misogyny is clearly out there, and still winning its game in terms of outrageous, offensive and unacceptable remarks.

Yet, there is reason to also take heart. For if there’s one thing we’ve learned within the first fortnight of 2019 is that a seal once broken, Koffee once spilt, loose cannons once fired and elections once lost, cannot be undone.

But misogyny can be challenged.

Also read: Crassness with Karan: No, Hardik Pandya is not the first time. Karan Johar's show is often rude and crude