The BJP has repeated its winning horse, while the Congress, it seems, shot the video on a mobile phone.

You are wrong if you think that the big battle is confined only to the big ballot.

Before creative minds slug it out to decide who coined 'Phir ek baar Modi sarkar' — the BJP’s central theme for the 2019 Lok Sabha Elections — let us tell you that former UK Prime Minister David Cameron actually coined this in 2015 when he appealed to Indian-origin voters in the UK, saying Phir ek baar Cameron sarkar.

His inspiration was, of course, the BJP’s 2014 theme 'Ab ki baar Modi sarkar'.

The Congress must have thought the ‘Ab’ is actually lucky — so, it came up with 'Ab hoga nyay', which also has its primary poll plank, the Nyuntam Aay Yojana or NYAY, featured proudly in its plumage.

What a perfect stage set for the elections, scheduled to begin April 11!

Sadly, there’s no award for the best political campaign, best lyrics or best video (apart from best votes), but here is our verdict anyway:

An absolute neck-and-neck battle. The BJP was earlier basking in the success of its 'Main Bhi Chowkidar' campaign — the Congress was just missing in action. Then, on a fine Sunday (the last Sunday before the election), the Congress sprang into action and released its music video — Ab hoga nyay.

Hours later, the BJP released theirs. But Congress had the first mover advantage on this!

From Sunday onwards, the party has been releasing video after video, in various regional languages.

The josh of exuberant first time voters across India is high. They are not only excited to cast their first vote but also make it count!They are singing in unison.“My first to the one, one and only one who has got everything done”Join them. Tweet with #MyFirstVoteForModi

The Congress, on the other hand, has not released any other video.

This is a tricky issue because the way the names of Javed Akhtar, director Nikkhil Advani and novelist Anuja Chauhan are popping up with Ab hoga nyay, the names of Prasoon Joshi and Piyush Pandey are nowhere near the BJP's campaign.

But they are there.

Like they were in 2014 — before there was reportedly a little dogfight (read misunderstanding) amongst Prasoon, Piyush and Ajay Singh as to who exactly came up with the winning slogan: Ab ki baar Modi sarkar.

Who's Ajay Singh, you ask? Well, presently, he's apparently the owner of SpiceJet.

And who's Piyush Pandey? Executive chairman and creative director at Ogilvy and Mather, South Asia and recipient of a Padma Shri in 2016.

According to reports, leaving Ajay Singh out of this since he has a very different role now, the BJP worked with the same team as in 2014, which also reportedly includes Anuraag Khandelwal, Satish deSa, Nilesh Jain, Rajkumar Jha and Pawan Bhatt — all bigwig names of branding and advertising.

So, it's celebrity power versus professional power: And it’s a tie.

Let’s now address the elephant in the room.

Phir ek baar is repackaging Ab ki baar, while Nyay is innovative. The Congress gets the point here, and only here.

Phir ek baar starts with a casual, breezy tone — much like those Bollywood songs which the heroes dedicate to their heroines when their relationship is absolutely on track, with their parents’ smiling approval. If the effect can be visualised, it would be much like that of Bollywood ice melting in a Bollywood sun — there are proclamations of achievements, promises of a beautiful future, lots of glowing smiles, etc. Also, breathtaking landscape, glimpses of our cultural richness, newspaper clippings, and of course, Modi, Modi and more Modi — in person and in masks.

On the other hand, Ab hoga nyay has range in its angsty soul — for demonetisation, for the random changing of names, and many other things. It has a throbbing spirit and beats similar to  those of students’ union slogans which will make your blood boil at every injustice portrayed.

So, what’s the alternative? Nyay — as in both justice and universal basic income.

But in fact, no one would believe that Nikkhil Advani had once assisted Karan Johar in slick flicks like Kal Ho Na Ho because he, it seems, didn’t even go outside his studio for this video. He must have asked his interns to find photos of angry young men and women who should not be seen smiling at all.

The result was this. 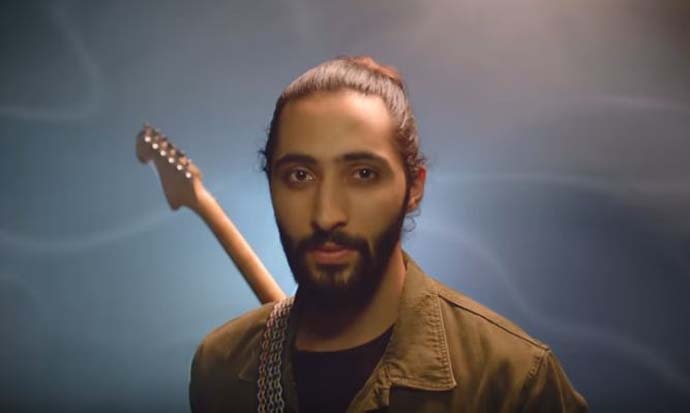 Everyone in the Congress video stares as if they can see through our soul. (Photo: YouTube)

It's clear who wins — but we must say, India's got talent!