Why I think #MainBhiChowkidar is not a political campaign. 'I am Congress' was

For the first time, we have got an election slogan which does not speak of a party or a leader alone. It speaks for all of us. It is a political slogan, but it goes beyond politics.

After a decade of UPA rule, riddled with a number of scams and corruption, India, I believe, was in dire need of reforms.

In 2014, while the country did vote for change, it also voted for a leader who was prepared to take on the daunting task of dealing with the entrenched nexus of politicians and middlemen.

Immediately after Narendra Modi assumed office, he took it upon himself to cleanse the cesspool of corruption in the system, bring the guilty to justice and introduce reforms that would institutionalise honesty and ethical governance. 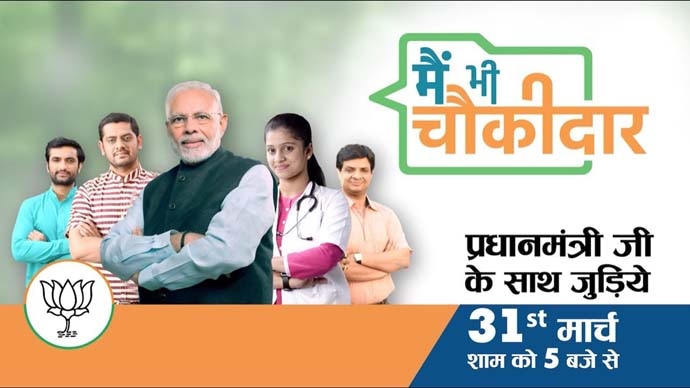 This campaign makes each of us a stakeholder in the nation. (Photo: Twitter)

Subsequently, to address the gaping trust deficit of the Indian electorate, he began to designate himself as the ‘chowkidar’ or guard — he appealed to the people to trust him with the responsibility of protecting India from internal and external challenges across social, economic and political strata.

The word ‘chowkidar’, which means 'watchman', is associated with an individual who is responsible for keeping a vigil against burglars and miscreants in the neighbourhood. It is believed that a vigilant ‘chowkidar’ also serves as a deterrent and ensures enhanced safety of the area.

The Indian electorate has always been fed slogans, often forcefully, that idolise and eulogise leaders. Unfortunately, the electorate is always expected to amplify the message — but it is never given the opportunity to claim a stake.

1.). I am Congress: In 2018, Rahul Gandhi had launched a social media campaign, “I am Congress”, which indirectly asked citizens to associate with a political party.

2.). Kaam bolta hai: In 2017, during the Uttar Pradesh Elections, Samajwadi Party’s election slogan was kaam bolta hai — meant to heighten the impact of governance delivered by the Akhilesh Yadav-led government in the state. 3.). Vote for calf and cow, forget others now: It was a plain appeal to the electorate to vote for Indira Gandhi.

4.). Garibi hatao, Indira lao, desh bachao: It was another appeal for a vote that promised the eradication of poverty via voting one leader.

5.). Indira hatao, desh bachao: A negative campaign that provided little foresight into the future beyond Indira.

#MainBhiChowkidar campaign is a marked departure from the past mainly for two reasons.

One, it instils a sense of ownership within the electorate. It provides the electorate — regardless of her/his political allegiances — an opportunity to participate in the campaign and contribute towards building a welfare state sans malfeasance.

Two, unlike regular election campaigns that are known to be either caustic or resemble a promissory note, the #MainBhiChowkidar campaign resonates with the apolitical populace as well — to my mind, the campaign makes the electorate the only pole of the campaign. Most political slogans eulogise one leader, one party. (Photo: Twitter)

By asking the nation to participate in the #MainBhiChowkidar campaign, the Prime Minister has ensured that all citizens are attentive and aware of their surroundings. They are like micro-vigilance officers. This will serve as a self-governing ecosystem where each citizen is involved — and thus engaged in controlling graft.

For example, the CEO of a multi-national company is responsible for transparent dealings, an entrepreneur for delivering the promised quality of products, a teacher for conducting scheduled classes, a child for learning and a citizen for paying their taxes.

The #MainBhiChowkidar campaign also has the potential to bring a change in the collective behaviour of citizens over a period. Like demonetisation, which encouraged digital payments, reportedly increased the tax payer base, and served as a deterrent to tax evasion, the #MainBhiChowkidar campaign will be able to infuse discipline in citizens. Similar to the Swachh Bharat Mission, which enforced change in sanitation habits, this campaign is directed towards bringing a change in the ‘chalta hai’ attitude that has plagued India for decades. It will also subdue our eagerness to resort to ‘jugaad’ and prompt us to live by the rules.

For every structural reform and scheme that the Modi-led BJP government has introduced in the past five years, the theme of ‘Sabka Saath Sabka Vikas’ has been the centering pull.

For example, Ujjawala aimed to provide women with ease of living and respite from indoor pollution, MUDRA to provide credit support and create livelihoods and SAUBHAGYA to ensure every household has access to electricity.

With the launch of #MainBhiChowkidar campaign, the Prime Minister has yet again reminded the nation of the challenges that need to be addressed — and conquered together. We as citizens need to keep an eagle eye on poverty, illiteracy, health, malnutrition, terrorism, unemployment, etc.

Every citizen is a stakeholder in the future of India — and thus, it is only apt for everyone to collaborate and cooperate on causes that inflict friction and disorder.

For a leader who contested the 2014 General Elections on the plank of development and transparent governance, the #MainBhiChowkidar campaign goes far beyond politics now. While the campaign is undoubtedly a befitting response to one of the most acerbic political attacks on Narendra Modi by the president of the Congress, Rahul Gandhi, the slogan is more than just a communication masterstroke.

It is a cogent reminder of the Prime Minister’s resolution to vanquish the cancer of corruption by injecting structural changes and transformations through public participation, collective responsibility and individual accountability.

#BJP, #Lok Sabha election 2019, #Narendra Modi, #Mainbhichowkidar
The views and opinions expressed in this article are those of the authors and do not necessarily reflect the official policy or position of DailyO.in or the India Today Group. The writers are solely responsible for any claims arising out of the contents of this article.