How (not) to gatecrash shaadis in style!

Gatecrashing into weddings, in fact, is pretty cool — and not an Indian idea at all.

Among many other irrefutable truths, 3 Idiots made it clear that gatecrashing into a wedding is part of an engineering student’s life. Rancho, Farhan and Raju got an earful the next day, but, for the NIT Kurukshetra authorities, it seems, singling out one Rancho, one Farhan or one Raju was a mountainous task — because there were so many.

So, they put up a notice issuing a strong warning against such ‘unethical/immoral/unwanted/uncalled for’ activities.

(Use of plenty of adjectives makes things severe — or that’s what we like to believe!). 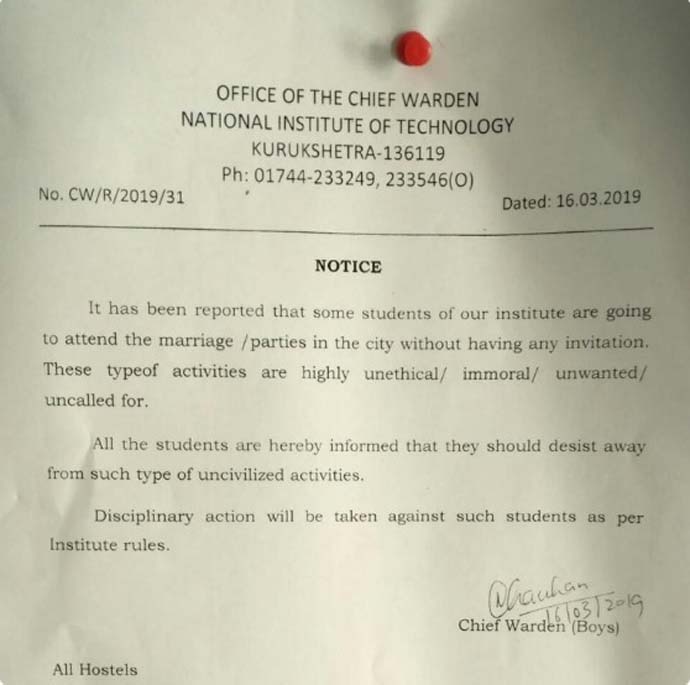 Or, the NIT may design QR-enabled invitation cards for the organisers — and then get invited. (Photo: Twitter)

Another Kurukshetra war has been narrowly averted. And until Vaisakha (the Hindu New Year), we don’t think there will be any big, fat Hindu weddings taking place in and around Kurukshetra (Haryana).

Gatecrashing into weddings, in fact, is pretty cool — and not an Indian idea at all.

Remember how Michaele and her now-former husband Tareq Salahi earned international prominence as they gatecrashed Obama’s dinner in 2009, actually held in honour of then-PM Manmohan Singh? It was not a wedding though.

Yes, anything unruly carried out with absolute spunk is always hailed.

But these engineering students didn’t make the cut, clearly.

They must have gone in hordes, wearing a geeky look, which the hosts might have never seen before.

Or, they must have headed straight towards the food court, without beating around the bush.

Or, maybe the mole is inside their hostels. The mess people might have noticed that they have a surplus of food every day, no matter how little they are cooking. If you load your plates like this, obviously you will be caught. (Photo: Screengrab/YouTube)

There are various possibilities. But one thing is for sure. Despite organising weddings in such close proximity to the NIT campus, these weddings are far from becoming tech-savvy. They don’t know that they can provide QR codes on invitation cards — scanning which will be the key to the wedding venue.

Another thing is also certain.

Be it an NIT (National Institute of Technology) or a private engineering college in a remote place which offers seats to students whose ranks are longer than their mobile phone numbers, the food quality has to be deplorable.