Sidhu, Kashmiri kids, Karachi Bakery, all faced our ire. And we will get to Pakistan too. Sure, we will

Going by how some of us are displaying our valour, we’ll soon have the neighbour saying ‘tauba tauba’ in a very different tone.

Tauba tauba, did you watch that Pakistani journalist threatening India with atom bombs in return for withheld tomatoes?

You didn’t? Tauba tauba, are you even on the internet?

For, now more than ever, the internet is where all the action is — action against Pakistan, that is. And boy, should Pakistan worry!

Our government, it turns out, does not take directions from TV studios after all, and has not yet gone to war with Pakistan — despite so many brave ‘experts’ planning the conflict out to the last detail in hour-long debates.

But just because the government thinks before it acts doesn’t mean Pakistan should breathe easy. It should take note of what ordinary people in India are capable of — and shiver.

Yo Pakistanis, you read all the wrack and ruin we threatened you with on social media. Now, look at our actions. We managed to stop this. You won't be laughing for long either. (Photo: YouTube screengrab/The Kapil Sharma Show)

We have managed to kick Navjot Singh Sidhu off Kapil Sharma’s comedy show for blathering on about peace. You might ask what a Member of Parliament was doing on a comedy show at all. You might ask why people watch Kapil Sharma at all. We will ignore those questions. We will tell you instead — in a menacing voice — that the will of the people managed to get him off the show.

Sidhu is an elected MP.

Yet, the punishment we most badly wanted for him was that he should not appear on a TV show. Why we wanted that is not important — what’s important is that if we managed to halt Sidhu’s canned laughter, we can definitely wipe the canny smile off your faces.

That’s not all. We also managed to bully a bakery into covering part of its name, and issue a clarification about its origins. 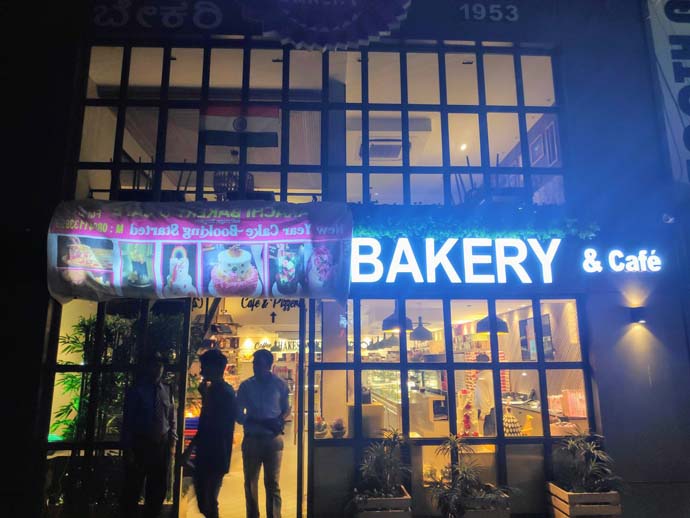 If we can do this to our own establishments, think what we'll do to yours. (Photo: Twitter)

Karachi Bakery has existed since 1952, feeding its delightful products to generations of Indians. Its owner is a Sindhi Hindu. But when logic does not interfere with our actions, can facts?

Know and tremble, ye Pakistanis, that though we could not get the Financial Action Task Force (FATF) to put you on its black list, we did manage to black out ‘Karachi’ from a bakery’s name. So there.

Then, there is the whole business of tomatoes.

Frankly, after the Tauba Tauba video and the Samaa TV ‘fact check’, we are all a little confused about whether we have any business of tomatoes to do or not to do with you. But that’s not important. It’s the intent that counts, and the point is — we are not willing to give you any tomatoes.

You have already banned the import of cheese. Do we pity your tomato sandwich-less existence now? No way, you deserve this. And more.

And don’t you think we're not capable of physical harm. Although so far, we have only beaten up our own citizens, and all the harm that has come to a Pakistani is your PM’s photo being covered at the Cricket Club of India. Spot the Imran: You can't. We covered his picture. (Photo: Twitter)

But read the intent behind it all. Soon, the day will come when we will make sure you can’t show your face to the world. We are not sure when. No promise in our country has come with a timeline — yet we have believed them all. So should you.

And be very afraid.

Also read: Red-Faced Like A Tomato: This viral video reveals a deep, dark truth about Pakistan