Sunny Leone's poster can save crops from 'evil eye', but can it save theatres, cows and Indian Army?

There are many places in this country that need her strong presence.

Between everyday debates on the effects of the male gaze and discussions around India’s compulsion for prudishness comes the extraordinary tale of a man who found middle ground. Hindustan Times, on February 13, reported  about one A Chenchu Reddy of Banda Kindi Palle village in Andhra Pradesh’s Nellore district — a farmer who found a unique way to save his crops from the evil eye of others.

No one looks at his crops. They look at Leone’s photo as they pass by.

“This year, I have a good crop on 10 acres. This has been attracting unnecessary attention of villagers and passers-by. To ward off their evil eye, I thought of this idea of putting up the big flax poster of Sunny Leone a couple of days ago,” he told HT.

Sunny Leone as a scarecrow may have been effective, but is a small farm best suited to her stature? Of course, not. There are many places in this country that need her strong presence: the poster should cast its aura of protection on every place of interest.

For example, the India-Pakistan border. While there is no denying that the Indian Army is a force to reckon with, Pakistan has managed to (and continues to) export terrorists into India. A few hundred well-placed posters of Sunny Leone ought to make insurgents gape for a few extra seconds. Now that would help Indian forces nip this business in the bud. Another great way to make use of this poster is to place it outside multiplexes that run anti-national films like Padmaavat. Karni Sena goons will have a tough time deciding what offends them more: a work of fiction based on another work of fiction, based on distorted oral history; or a bikini-clad woman who used to work in the adult film industry. It is more likely, however, that they will set both the poster and the theatre on fire. Of course, it’s not like the Karni Sena cannot employ the help of Leone. Her poster can be pitched outside various gaushalas in Rajasthan, Haryana and Uttar Pradesh. Her watchful aura will protect all the mother cows from the evil eyes of beef-eating men whose only aim in life is to make fillet mignons. 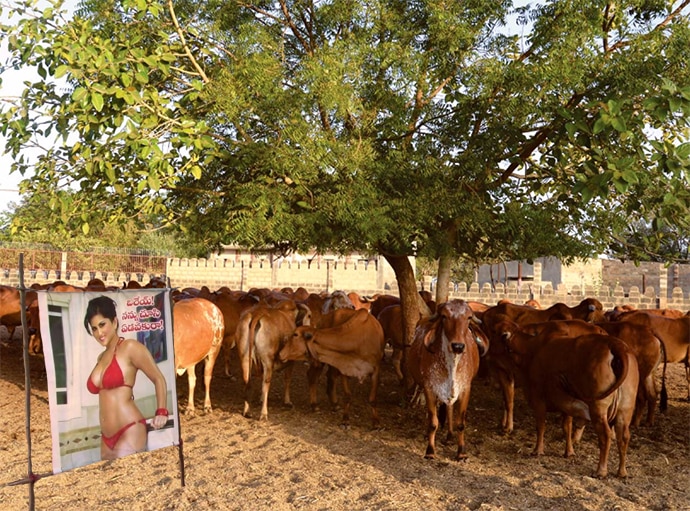 And as the fringe Right slowly adopts Leone’s poster as part of Hindu tradition, it can easily enough make its way into the Rashtriya Swayamsevak Sangh — the "proper, non-fringe" Right — where it will be part of intense training sessions, and join Mohan Bhagwat’s three-day-battle-ready army.

This army can, in turn, be deployed at the Indo-Pak border; the move's effectiveness and strategic advantages have been stated above. Of course, one can see why this would be cause for some confusion. How can Sunny Leone join the RSS? Can women even join the RSS? Well, no. RSS was, last year, accused of allowing women to join its ranks. Thankfully, they rubbished these claims faster than sunlight reaches earth.

Sunny Leone, as it seems, would not be able to join the glorious organisation. But her poster, being inanimate and gender-free, will easily qualify.

Also read: Sad if my love for India is measured over whether I stand up for the national anthem or not