Taimur Ali Khan withdrew from public life for two days: What happened after that?

What happens when someone asks you not to do something? You do it more, and with such gusto that no one is in a position to remember that you were not supposed to do it at all!

This is exactly what happened in the curious case of 'cute Taimur' photos.

All of us have seen more Taimur photos than we have seen ours at that age. In an unprecedented attack to that period of unadulterated and passive joy, there apparently came a phase — a couple of days, to be precise — when photojournalists were asked by Taimur Ali Khan’s father, also known as Saif Ali Khan, to stay away from the ‘little munchkin’ the nation has. The reasons were well-known and serious, like Taimur must have a normal childhood, etc.

But what happened after that?

The nation mourned; the photographers felt jobless. It was almost like a medium-scale industry drying up all of a sudden.

But then, everything was business as usual, as the images of the yet-to-be-two-year-old are breaking the Internet; in Halloween costume, in Diwali costume.

Here, you are allowed to pause and ask yourself whether Diwali has come and gone yet.

There are photos of a yellow kurta-clad Taimur sitting on the lap of Kareena, who is also wearing an ethnic dress. 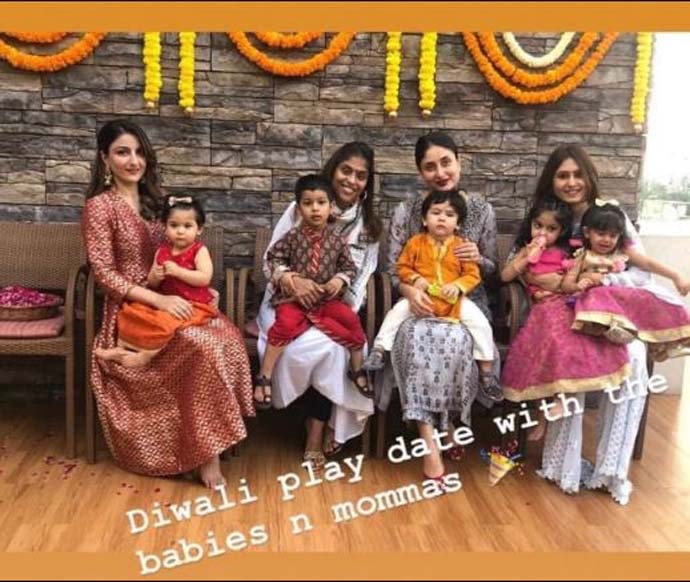 According to sources (we don’t believe them though), this was a Diwali play date, organised by an event management company. Soha and her daughter Inaaya was also there, along with a few lucky but unknown kids.

Taimur was also spotted in a Halloween costume as he was going to attend Arpita’s (Salman Khan’s sister) Halloween party. He apparently did something any two-year-old is supposed to do — rambling.

But the nation swooned because they heard Taimur declining the photographers, saying a strong ‘no’.

Stronger than Saif's 'no'. We know it's not easy to find the perfect balance between private and public lives. (Photo: Instagram)

With this, comes another comment from the Pataudi family, which is now apparently grappling to be as relevant as Taimur.

Saif Ali Khan dismissed the notion that there was any ban on taking Taimur’s pictures. He has a point.

“Who are we to decide? Who will listen anyway?”

If the sources, who, in the first place, informed us that Saif asked photo journalists not to stand outside his house, tracking Taimur’s movement, are to be believed, this is what Saif Ali Khan has now said.

This makes sense as nothing can actually stop photographers from clicking celebrities in public places.

After all, what is celeb-spotting?

Isn’t it a hobby like bird-watching? One can’t just stop you from cultivating your hobbies!

The Taimur craze is undying and unexplained.

There are a number of fan pages on Instagram dedicated to Taimur. There’s even one on Taimur’s nanny, the lady always seen carrying Taimur. She is also on her way to embrace celebrityhood, as there are reports on her, her monthly salary (Rs 1.5 lakh), overtime and perks (foreign tours).

So now, the ban which was never there has been lifted.

Nothing can come between Taimur and his fans, not even the chhote nawab!

Also Read: If Taimur's pictures are up for sale, yes, I'm buying