The losses in Rajasthan, Chhattisgarh and Madhya Pradesh have alerted the Modi government that a change of strategy is needed. Here are some new measures we could soon see.

The results of the recent Assembly elections in five states have alerted the BJP for the 2019 Lok Sabha elections.

In the wake of the losses suffered by the BJP, the Narendra Modi government at the Centre is likely to focus on rural-social engineering by revisiting its famous slogan: 'Sabka Saath, Sabka Vikas'. 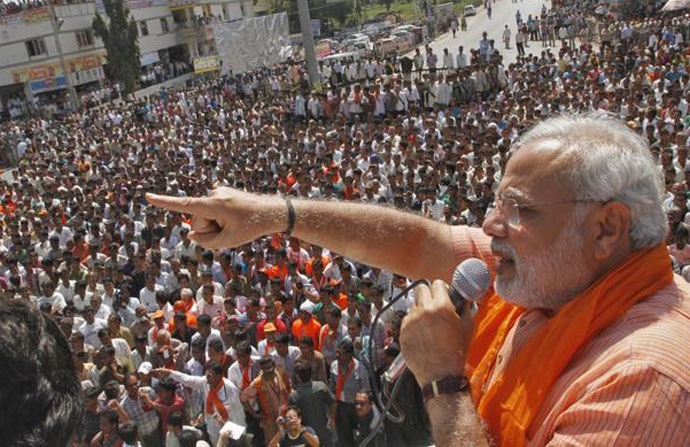 The BJP may expand the scope of existing welfare schemes before the 2019 general elections. (Source: Reuters)

BJP president Amit Shah has expressed hope several times that if the party could win the confidence of the over 22 crore families that have reportedly benefitted from the various schemes announced by the Narendra Modi government, it could well be the game-changer BJP is hoping for ahead of the 2019 Lok Sabha elections, probably giving it more seats than what it won in 2014.

From the voting pattern in the recently held elections in Madhya Pradesh, Rajasthan and Chhattisgarh, it is manifest that the saffron party’s position has weakened in rural areas of the Hindi heartland. It would therefore be right for the government to woo the rural voters either by making new announcements or expanding the net of the existing schemes.

In the elections held in three states of the Hindi heartland, the Congress had raised the issue of farmer debt and had even promised farm loan waivers.

Immediately after its victory, the Congress governments fulfilled their promise and waived off farmers’ loan. The move has put immense pressure on the Narendra Modi government. It is therefore believed that the Modi government could soon announce bigger farm loan waivers to bring relief to about 26.3 crore farmers of the country.

There is speculation that the Modi government is working on its plan to come out with a waiver to the tune of Rs 4 lakh crore before the elections of 2019. The Modi government could annonce huge relief measures for farmers to counter the farm loan waivers by the Congress. (Source: Reuters)

Remember, just before the 2009 general elections, the UPA government had announced Rs 72,000 crore farm loan waiver. This paid rich dividends with the Congress going on to win the elections.

Prime Minister Narendra Modi has already said that a big announcement awaits the medium and lower-middle class people with regard to GST rates. The government is planning to bring 99 per cent of the goods under the purview of 18 per cent or less GST is underway.

This will help reduce the cost of 99 per cent items, and ultimately the burden on common man.

Working in this direction, the GST Council after its meeting on December 22, reduced the rates on 23 items from 18 per cent to 12 per cent and 5 per cent. Many items including televisions, computers and various auto parts will be cheaper now. Some items in the 5 per cent bracket have been moved to 0 per cent.

Gas connections under Ujjwala Yojana for all ration card-holders

The Modi government has extended the Ujjwala Yojana, under which free cooking gas (LPG) connections are provided, to all poor households (ration card holders). The scheme, launched in 2016, originally targeted giving LPG connections to mostly rural women members of below the poverty line (BPL) households.

The list was later expanded to include all SC/ST households and forest dwellers among others.

But the scheme is now being extended to all poor households.

The scheme will still be applicable only for women members of beneficiary households.

Under the scheme, the government provides a subsidy of Rs 1,600 to state-owned fuel retailers for every free LPG gas connection given to poor households. This subsidy is intended to cover the security fee for the cylinder and the installation charges.

The Pradhan Mantri Ujjwala Yojana was launched on May 1, 2016, to provide 5 crore free LPG connections in three years. The target was expanded to 8 crore within five years. Under the extended scheme, more than one crore people are likely to benefit.

NPS bonanza and relief in gratuity

The Modi government recently announced a bonanza for all government employees. It raised the government’s contribution in the National Pension Scheme (NPS) to 14 per cent of basic salary from the current 10 per cent.

The minimum employee contribution will, however, remain at 10 per cent.

This move will benefit crores of people who live on pensions.

The government is also working on a plan to give relief to private sector employees ahead of the Lok Sabha elections next year. It is preparing to reduce the time limit of five years of employment at an organisation for gratuity payment to three. Labour unions have been demanding a reduction in the gratuity time limit.

The government is also considering a move to extend gratuity benefits to contractual employees working with the central government. If approved, the decision will benefit millions of private sector employees who often change companies before completing five years.

Good governance and the message of vikas

The dilemma facing Modi is — Hindutva or vikas?

The BJP is reportedly in the throes of an internal debate over which of the two issues should be central to its campaign narrative for the national elections. The party is racing against time to resolve the dilemma, especially after its defeat in the recent assembly polls. Prime Minister Narendra Modi at Sangam: The BJP is reportedly locked in a debate over whether it should talk about Hindutva or vikas. (Source: AP)

Of late, the image of the Modi government has taken a beating. Political pundits say that the government in its bid to promote its Hindutva agenda aggressively has put its agenda of ‘vikas’ on the backburner.

The results of the recent elections have sent a clear message that the use of the Hindutva card has its limitations in overcoming anti-incumbency and governance issues such as the farm sector crisis and dearth of jobs.

Madhya Pradesh, Chhattisgarh and Rajasthan have an overwhelming majority of Hindus but the efforts by the BJP and its intellectual arm, the Rashtriya Swayamsevak Sangh (RSS), to raise Hindutva do not seem to have paid off.

Taking a cue from this defeat, the Modi government will go for course-correction and, in all likelihood, once again bring the issue of development to centre-stage.

Also read: How Modi has set the tone for 2019: The Pradhan Sevak is back

Post your comment
#Nps, #Ujjwala scheme, #Narendra Modi, #2019 general elections
The views and opinions expressed in this article are those of the authors and do not necessarily reflect the official policy or position of DailyO.in or the India Today Group. The writers are solely responsible for any claims arising out of the contents of this article.