Narendra Modi could well end up as a one-term prime minister who frittered away his mandate.

A Congress-led mahagathbandhan government, with a colourful cast of characters that would put an off-Broadway production to shame, might actually be good for India – as long as it has, unlike radioactive thorium, a short half-life.

During his interview with ANI on New Year’s Day, Modi positioned the 2019 general election as a battle between the “janta and the gathbandhan”. It is a shrewd strategy. It is now no longer Modi versus the Opposition but Modi and the people (janta) together versus the Opposition. 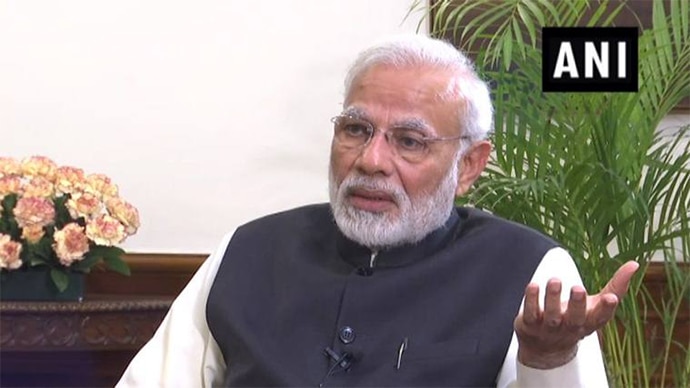 PM Modi recognises that rural distress could tip the election in favour of the mahagathbandhan. (Photo: ANI)

Modi said dismissively of the mahagathbandhan: “They still speak in different voices. Who are these people? They are looking for each other’s support to save themselves.”

The interview, however, revealed that Modi recognises rural distress could tip the election in favour of the mahagathbandhan. Economic issues, rather than an emotive Hindutva pitch on the Ram mandir, will therefore resonate strongly in his campaign.

Attacks though on the Gandhis (“so-called first family has to walk around on bail”) will continue.

But for Modi, reversing the wave of disenchantment among his core base will not be easy. His retreat from hard Hindutva will alienate the fringe. The focus on economic issues may not bring back the moderate vote.

By being all things to all people, Modi might end up falling between two stools. To avoid that fate he will need to double down on the primary theme of his interview: Modi and the janta versus the anti-BJP mahagathbandhan. It could be his silver bullet.

To form a government in May 2019, the Opposition alliance needs to meet two conditions. First, the Congress – as its own leaders have recently conceded – must win at least 125 seats for Rahul Gandhi to lead the mahagathbandhan and take it close to a majority tally of 272 Lok Sabha seats. That’s a tough climb from the 44 seats it won in 2014 but we’ll look at its state-wise seat prospects in a moment. 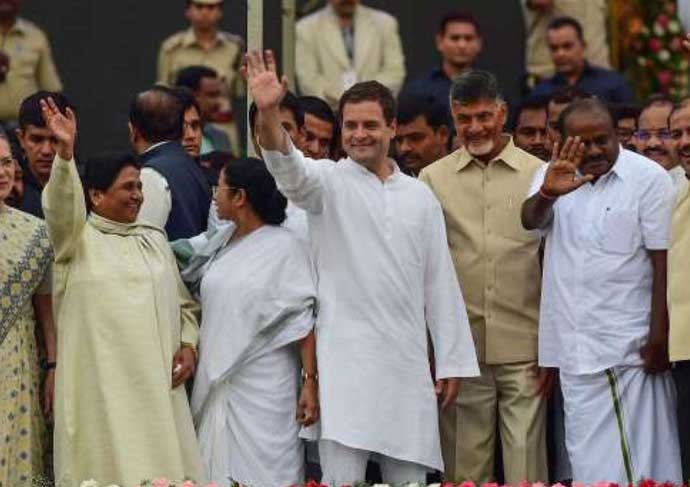 Parties opposed to the BJP could well form the government in 2019. This will comprise a colourful cast of characters. (Source: PTI)

The second precondition is even trickier – taming the clashing ambitions of Opposition leaders like Mamata Banerjee, Mayawati, Akhilesh Yadav, K Chandrashekar Rao and Naveen Patnaik. The five regional satraps could end up controlling between them around 100 Lok Sabha seats in 2019.

Rahul will have to cajole them to play second fiddle to him in a UPA-led mahagathbandhan government rather than form a competing federal front. 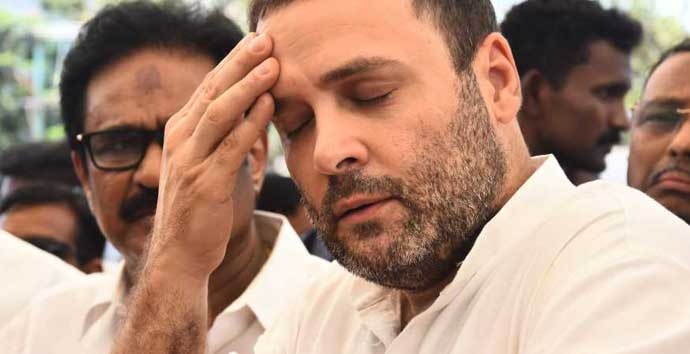 Rahul Gandhi may not find it easy to convince other parties to let him take the Prime Minister's chair. (Source: PTI)

This projection represents a best case scenario for the number of Lok Sabha seats the Congress is likely to win. Campaigning begins in real earnest in the new year: Much can change between then and May 2019.

This computation takes into account the seats the Congress won in these states and UTs in five previous Lok Sabha elections from 1998 to 2014. It also takes into account vote shares of the Congress in the recently concluded five Assembly elections, especially in Madhya Pradesh, Rajasthan and Chhattisgarh. It factors in differences of voting patterns between state and Parliamentary elections.

Campaigning for the April-May 2019 Lok Sabha election will soon begin in full throttle. Chemistry then could upend the math.

The conclusion though is stark – the Congress will find it difficult to cross 100 Lok Sabha sets, much less the 125 seats it says it needs to put Rahul Gandhi in pole position to lead a mahagathbandhan government as prime minister.

The Congress would need, as these figures show, another 180-odd seats from allies to gain a 272-seat majority. It could therefore face a leadership challenge in the mahagathbandhan from Mamata, Mayawati and even a dark horse like KCR. 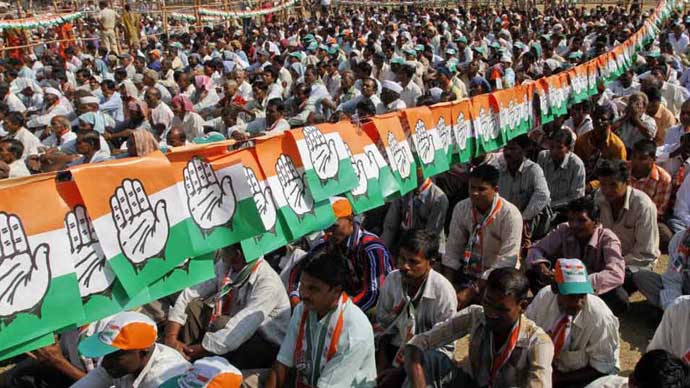 It doesn't look like the Congress can win more than 100 seats in the upcoming Lok Sabha elections. (Source: Reuters)

If the BJP falls below 200 seats, a hung Parliament looms.

The Congress-led UPA, with DMK as the only major contributor, could be stuck at 130 seats.

The federal front, led by the SP, BSP, TMC, TRS and other regional parties, with its 125-odd seats, may or may not join the UPA. If it does, will it accept Rahul as prime minister? Given his growing profile, and despite grumbles from the regional satraps, it might.

The crab syndrome may impel Mayawati, Akhilesh and Mamata to pull each other down. Their seats in Uttar Pradesh and West Bengal would not give them decisive bargaining power.

A month ago, Rahul would have been content to drive the mahagathbandhan from the back seat and await his turn as Prime Minister in 2024.

Rajasthan, Madhya Pradesh and Chhattisgarh have changed his mind. Why wait for 2024 when 2019 beckons?

But leading a coalition with just 95 seats comes with its own bagful of problems, including temperamental regional satraps who could withdraw support any time. Narendra Modi may have to sit on the Opposition benches when the results for the 2019 general elections are announced. (Source: Twitter)

He will sit on the Opposition benches with his 180-odd BJP MPs and much to ponder. Losing 100 Parliamentary seats in five years won’t be a pleasant experience.

He will know though that he has only himself to blame for not delivering fully on the maximum governance, minimum government he pledged in 2014.

Witnessing the chaos of a mahagathbandhan government unfold, with no party holding 100 seats, will however brighten his mood.

A house built on cards, as the Congress-led mahagathbandhan would inevitably be, will eventually fall under the weight of its internal contradictions.

But till it does, India’s electorate will get a taste of an alternative government and its economic, foreign and social policies.

What Modi should worry about is that voters might like what they get. Then Modi could well end up as a one-term prime minister who frittered away, exactly as Rajiv Gandhi did, his historic mandate.

#Narendra Modi, #Rahul Gandhi, #Mahagatbandhan, #2019 general elections
The views and opinions expressed in this article are those of the authors and do not necessarily reflect the official policy or position of DailyO.in or the India Today Group. The writers are solely responsible for any claims arising out of the contents of this article.