Pulwama and 2019 General Elections: Wait for the surprise

Crystal-gazing into electoral outcomes in a complex demography like India is particularly fraught with risks because of what former US Secretary of State Donald Rumsfeld once famously said, in a different context, about there being known-knowns, known-unknowns and unknown-unknowns.

Indian General Elections are more so, not least because states often respond quite differently to each other, making it well-nigh impossible to build a coherent national narrative.

By far, the best way of calling a poll is to directly ask the electorate what they intend to do (pre-poll surveys) or have already done (post-poll surveys). Electoral data may be a useful tool — but it has limitations because human response to the ever-changing environment does not necessarily follow a set pattern that such data can predict or predetermine — this makes polls ever so exciting and human behaviour ever so fascinating.

To come to the point now, how would the Indian voter vote in the forthcoming General Elections? The last of a series of ‘Mood of the Nation Survey’ carried out by the Centre for the Study of Developing Societies (CSDS), across 19 states between April and May 2018, said 47% of the respondents were of the opinion that “the Modi government does not merit another opportunity to govern India after the 2019 Lok Sabha elections”. Still a mystery: How does the voter finally decide which way his or her vote will go?. (Photo: PTI)

This sentiment, as the survey pointed out, is actually far worse than what was recorded for the Manmohan Singh government in July 2013 — then, 39% were against giving UPA II another chance. This survey has been in the public domain (known-known) for long, but perhaps not so commonly known.

We do know the fate of UPA II — but will that fate befall the Modi government? We don’t know.

In the meanwhile, the Pulwama terror attack and its aftermath (let’s say, unknown-unknown until February 14, but now known-unknown) have added a new twist to the crystal-gazing.

How would these play out in the forthcoming polls? Will they boost the BJP’s chances? Again, nothing can be said with any amount of certainty until the entire episode plays itself out. However, the 1999 elections that followed the Kargil conflict may provide some indication.

Old-timers would recall the BJP and its allies had turned the next couple of months into an elaborate Independence Day celebration with the national anthem and patriotic songs playing in loop 24x7 and the tricolour fluttering atop every campaign vehicle, party office and houses of their workers.

Analysing the post-poll data, CSDS’s Yogendra Yadav and Sanjay Kumar had then written that the BJP had seemingly “staged a recovery” after its decline towards the end of 1998. And the lotus bloomed: 2014's General Elections demonstrated a dramatic change in how votes were polled for the BJP. (Photo: PTI)

The BJP had won 182 seats then, the same as in 1998, while contesting 49 fewer seats and scoring about 2% fewer votes. Whether the “recovery” was later corroborated by asking the electorate directly, the need for which Yadav and Singh had felt then, is not known but if the behaviour of the BJP leaders following the Pulwama incident is anything to go by, a similar attempt seems afoot.

The continual processions of the martyred CRPF jawans’ coffins in Delhi and across the country, BJP leaders accompanying such parades and paying elaborate tributes appear to many as an attempt to create a “nationalistic wave in the country”. In fact, that is how Gujarat BJP leader and party spokesperson Bharat Pandya described it while apparently exhorting party workers in Vadodara to turn this into votes last Monday.

There is another known-known element which, again, is not so commonly known.

The 2014 General Elections demonstrated a dramatic change in the way votes were polled in favour of the BJP. Compared with the way people voted for the BJP in the previous elections, the electoral data for 1999, 2004 and 2009 General Elections show a distinct pattern — different states voted differently, some giving more votes to the BJP and others less in each.

All states, save for Sikkim where the vote percentage remained the same (2%) and in Daman and Diu, where it fell, voted for the BJP in a greater number.

In 18 states, the BJP recorded the highest ever vote share. The post-poll survey showed that the social groups supporting BJP had expanded among the OBCs, SCs, tribals and the upper and middle classes. 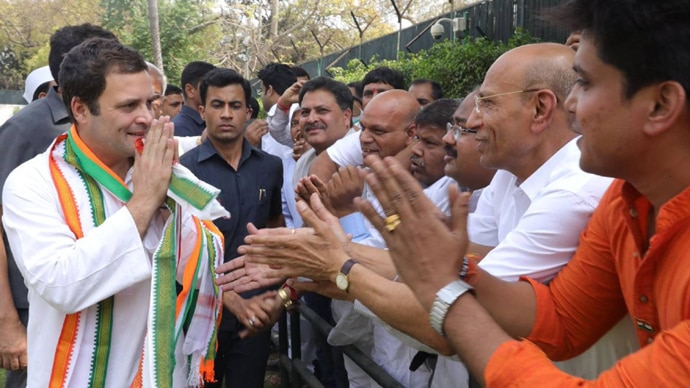 Rahul Gandhi has been benefitting from a wave against the BJP. But will he be able to turn the tide? (Photo: PTI)

Since then, the BJP has expanded its base even further, forming governments on its own in Assam, Tripura, Uttar Pradesh; in collaboration with others in Bihar and J&K (now dissolved) and made political headway in several others like Kerala, West Bengal and Odisha. All this has added to the BJP’s political muscle. In the changed circumstances, the old rules of the electoral game may or may not work any longer.

Then there are a few other known-knowns: wide-spread disaffection among youth over growing unemployment; rural/agrarian distress now sought to be addressed through an income transfer of Rs 6,000 to small and marginal farmers but leaving agricultural labourers, who constitute 55% of India’s total agriculture workforce, high and dry and strong resentments amongst the minorities, Dalits and tribals against relentless attack from violent Hindu groups with overt and covert support of the powers-that-be. The unknown in all of these is how far they will impact the poll.

The obvious question now is — will the BJP win the 2019 General Elections? Frankly, past electoral data and surveys only give insights into the past behaviour of the electorate and some indication for the future which may or may not happen.

The Indian electorate has surprised us all many times in the past decades. Let us be prepared for it.