Gone with the icy wind: Four reasons why Kashmiri Pandits will never return to Kashmir

Many Kashmiri Muslims say that they are sorry for what happened to Kashmiri Pandits.

Many people have recently started talking about the return of Kashmiri Pandits to Kashmir, the latest one being Shah Faesal.

In my opinion, they are talking nonsense.

Kashmiri Pandits will never return to Kashmir. Here are the reasons:

1. They were a minority — and will remain so

The Kashmiri Pandits were a tiny, peaceful minority of three or four per cent of the population of Kashmir, whose ancestors had lived in Kashmir for centuries. They were hounded out of Kashmir — many being slaughtered. Out of about four lakh Kashmiri Pandits living in Kashmir in 1990, hardly a couple of thousands are still there today.

Is there any guarantee that they would not again be slaughtered if they return? Rape, slaughter, threats, loot: Who will guarantee life and dignity for Kashmiri Pandits even if they return? (Photo: Reuters)

When they were there in the 1990s, loudspeakers from mosques spouted venom against them, asking them to leave Kashmir or convert to Islam. Notices were posted on their doors, asking them to leave Kashmir or be killed. Crowds would come before their houses, shouting that the men should get out of Kashmir, but the women would not be allowed to leave.

In Srinagar itself, many Kashmiri Pandits were killed. There were villages of about 1,000 families, comprising hardly about 10-15 Kashmiri Pandit families. Kashmiri Muslim boys with machine guns would reportedly come and selectively slaughter the Pandits — often after being pointed out by their Muslim neighbours.

Some Kashmiri Muslims say that the Pandits were 'cowards' for having run away from Kashmir.

This is a ridiculous charge.

What can a tiny minority do when they are being selectively targeted by the majority? When several Kashmiri Pandits were brutally killed, there spread panic in the community, which made them flee.

They were like the Jews in Nazi Germany — the only difference being that most of them did not end up in gas chambers. 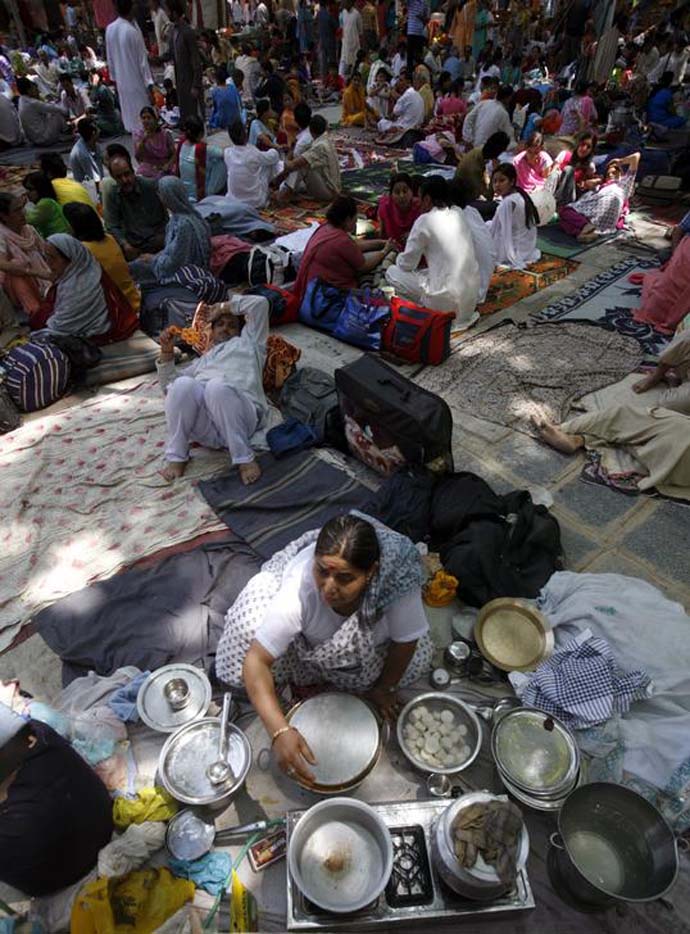 They may want to return to their home. But no, nothing is waiting for them there now. (Reuters photos of gatherings of displaced Kashmiri Hindus)

2. No, Kashmiri Muslims are not actually sorry

But they never admit it was Kashmiri Muslims who were responsible for the exodus and, instead, they shamelessly blame the-then Governor, Jagmohan.

A more blatant lie cannot be imagined — this just shows they are not really sorry.

Of course, I don't blame the present Kashmiri youth for what happened as they were not born at that time, or were just toddlers — but if they have any conscience, they should turn on their elders demanding answers for what the latter did, or turned a blind eye to, instead of blaming Jagmohan, like young parrots repeating the old lie they have been taught. Most of the leaders in Kashmir today, who demand 'azadi' for Kashmir, are apparently akin to Islamic fundamentalists. So, should the Pandits convert to Islam in order to come back?

Or, should they come back and live as second-class citizens, as 'dhimmis', with the sword of Damocles over their heads all the time, awaiting another slaughter?

And where will they live and what will they do in Kashmir? Their houses have mostly been destroyed or taken over by Muslims, their jobs and businesses lost.

4. No roots in Kashmir

A quarter of a century has elapsed since the exodus of Kashmiri Pandits took place.

Most of the present Kashmiri Pandit youth were either not born then, or were kids with hazy memories, if any at all.

So, they have no roots in Kashmir. And the middle-aged have somehow adjusted to a new life in elsewhere.

What will they now do in Kashmir?

All this sentimental talk of the 'return of the Kashmiri Pandits to Kashmir' is rubbish.

For Kashmiri Pandits, Kashmir is gone with the wind.