Economist Abhijit Banerjee is closely associated with the Congress’ NYAY scheme. He spoke with Rohit E David about why NYAY could work and why the Congress' anti-poverty aim should be trusted.

Is Nyay a game changer?

I don’t know whether it's a game changer or not. That, the results may tell. But it was something that grabbed people’s attention — and disrupted the obsession with Pulwama.

Why not empower people with proper educations and jobs? Why a dole?

First, our state-driven efforts to provide health and education have not actually been roaring successes so far, and not primarily for lack of resources. People are voting with their feet, paying money to the private sector to avoid government-provided services. Telling people at this point that we will bring about a revolution in these services without any proof that it will work will do very little to reassure our voters, particularly since it will take many years before the results become apparent.

Second, given that health and education take a long time to bear fruit, we will then be telling the current generations — “Sorry, you are out of luck’. We failed you and now, we've decided that we don’t like “dole”—I hate that word precisely because it suggests that we are being (excessively) generous to the people we, as a nation, have so obviously failed, rather than compensating them for our failures. 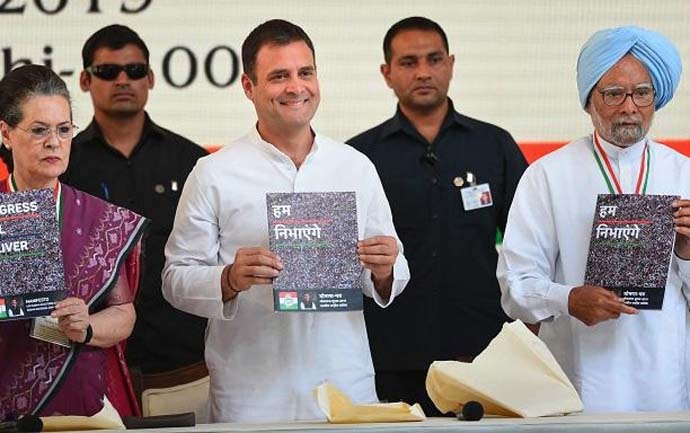 The Congress launches NYAY: Will this win them 2019? (Source: PTI)

Why trust the Congress' desire for poverty alleviation, given its track record over several decades?

To be fair, the Congress did come up with the 'National Rural Employment Guarantee Act' (NREGA) and the Food Security bill. At the least, the first has been shown to have had a strong effect on rural incomes and wages.

What could anti-corruption mechanisms be in a scheme like NYAY?

Let us first have the scheme — then we will know what loopholes to plug.

Won't NYAY have to perforce be funded by raising taxes on the middle class?

There is some debate about this.

After all, the economy is growing, so the question is whether growth will provide enough extra revenues if we don’t cut taxes further.

My sense however is that we are undertaxed compared to countries that we aspire to be like — like China — and we need to do something about it.

NYAY, if it happens, will, we hope, demonstrate that the state can reliably deliver benefits when it promises to do so. This will create the credibility to move further towards DBT.

Why do you think it took a non-Congress government to think of basic infrastructural inputs like toilets?

It did not. Toilets have been a focus of many state governments before this one — most of those efforts have failed.

The jury is out on this one.