Abhishek Banerjee does not have any competition within the Trinamool Congress, but he has a challenge for himself. He needs to come out of the image of a 'prince' and the shadow of his aunt, and be a people's leader.

Trinamool Congress has elevated its youth wing president and Mamata Banerjee’s nephew, Abhishek Banerjee, to the post of national general secretary. The responsibility was being discharged by its state president Subrata Bakshi after Mamata’s close confidante Mukul Roy jumped ship to join BJP in 2017. Now the Number 2 in the TMC will take over the charge. During Bakshi’s tenure, TMC could not expand much in other states. Rather, its units in Uttar Pradesh, Assam, Odisha and North Indian states went inactive.

Apparently, this is a political party’s internal organisational decision to bring a leader to a new post to give a boost to party affairs. Here, the elevation of Abhishek, a two-time Member of Parliament, is an indication of a long-drawn process — his image makeover.

Since the 2019 Lok Sabha election debacle, TMC Chief Mamata Banerjee has gone through the same process with the help of poll strategist Prashant Kishor. Prashant has helped Mamata turn the table on many fronts. 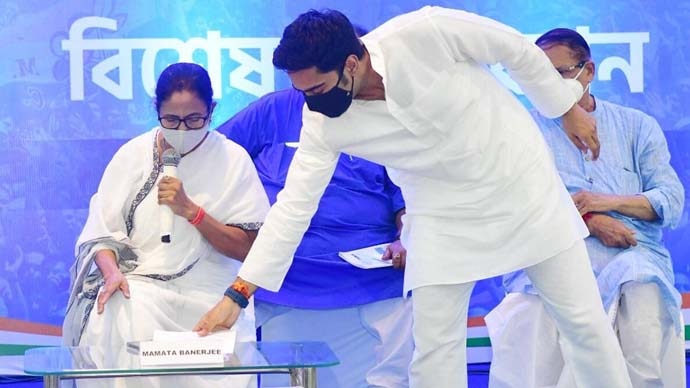 Abhishek Banerjee needs to come out of the image of a ‘prince’ and the shadow of his aunt Mamata Banerjee. (Photo: PTI)

Be it the grassroots-level corruption of TMC leaders or Mamata’s pro-Muslim image or a loose organisational structure — the poll strategist helped in changing the perception of the people in two years. The fiery lady of Bengal appeared in her new avatar — ‘Bengal’s own daughter’ before the 2021 West Bengal Assembly elections. The strategy paid its dividend in the results.

Now it is ‘Project Abhishek’. The young leader, known in the media as ‘Yuvaraj’, was often compared with Rahul Gandhi for lack of political acumen and enjoying political power because of their dynasty. Mamata Banerjee floated an organisation, Yuva, to launch her nephew on the centrestage of Bengal politics. Within a short period of time, an able leader like Suvendu Adhikari was removed from the post of youth TMC president to accommodate Abhishek.

He turned out to be such a ‘superpower’ in the organisation that he was the undeclared Number 2, just after Mamata Banerjee. There were rifts within the party and resentment among some leaders due to the power Abhishek exerted in the organisation and allegedly in the transfer and posting of IPS officers on behalf of the party. Both Mukul Roy and Suvendu Adhikari left the party, unhappy with Abhishek’s rise.

Whether it was the 2018 Panchayat elections or the 2019 Lok Sabha elections, Abhishek Banerjee could not demonstrate his organisational skills. Rather, in the districts in which he was the ‘observer’, TMC scored miserable results. Still, Abhishek’s power did not wane.

In the last two years, the youth leader worked closely with Prashant Kishor and, as many would say, took over the role of ‘backroom boy’ while campaigning across the state ahead of the 2021 Assembly elections.

Despite being the target of BJP leaders including Prime Minister Narendra Modi, for alleged corruption and involvement in coal and cow smuggling, Abhishek did not bow down. CBI officers even questioned his wife at his residence in connection with a coal smuggling case. Abhishek led from the front like his aunt. Mamata too defended her nephew in public meetings.

After a colourful victory against the mighty BJP in Bengal, Abhishek Banerjee is now serious about changing his image: that of the ‘Prince’ in the TMC. He is not nurturing his Diamond Harbour constituency anymore. He is up for a bigger role.

First, he visited areas affected by Cyclone Yaas and met the homeless people. Clad in trousers and a T-shirt and mixing with the people at the shelter homes was an indication that he wanted to break the barrier between him and the common people. A legitimate allegation, given his heavy security cover. Clad in trousers and a T-shirt and mixing with the people at the shelter homes was an indication that Abhishek Banerjee wants to break the barrier between him and the common people. (Photo: Facebook/ @AbhishekBanerjeeOfficial)

Second, he has been given the responsibility to expand the party at the national level, clearly keeping an eye on the 2024 general elections and in tune with Mamata Banerjee’s national ambition. In an interview during the Assembly election campaign, Abhishek had told Bengali daily Anandabazar Patrika that he wanted to expand the party to at least 10 more states. This is an important job considering Mamata Banerjee's ambition to project herself against Narendra Modi for the prime ministerial contest in 2024. However, it is a tough job.

Being fluent in English and Hindi, Abhishek may not find it difficult to perform his duties at the national level, unlike many Bengali leaders. He needs to be friendlier with the national leaders and draw their attention to the fact that he is a serious political player. He also needs to understand the nuances of national politics, which he has somewhat been exposed to as an MP.

It is expected that he will also learn his lessons from his aunt’s experiences. Despite being a seasoned politician, Mamata Banerjee was humiliated by Samajwadi Party leader Mulayam Singh Yadav at the time of the presidential election in 2012, or when Mamata decided to address a joint rally with Anna Hazare in the capital, or, for that matter, how Mamata’s efforts to lead the National Front in 2019 got a jolt after a colourful launch in Kolkata.

Abhishek does not have any competition in the party, but he has a challenge for himself. He needs to come out of the image of the ‘Prince’ and the shadow of his aunt, and be a people’s leader. Mamata is giving him the opportunity and the process has perhaps just begun.

#West bengal assembly elections 2021, #Trinamool Congress, #Mamata Banerjee, #Abhishekbanerjee
The views and opinions expressed in this article are those of the authors and do not necessarily reflect the official policy or position of DailyO.in or the India Today Group. The writers are solely responsible for any claims arising out of the contents of this article.