A shot in the arm for cops: Supreme Court says activists were not arrested because they opposed the government

On Friday, when the Supreme Court gave its verdict that the Pune Police’s action to arrest five activists suspected to be linked with the banned Maoists was not because they opposed the government, chief minister Devendra Fadnavis was in an official meeting at Sahyadri, the state guest house. As the SC allowed the Pune Police to continue their investigation into the case, Fadnavis, with unusual joy, asked his office to arrange for a chat with reporters to express his happiness.

The state police heaved a huge sigh of relief after the so-called human rights activists across the world put them in the dock for trying to be vindictive against the arrested ones — Varvara Rao, Sudha Bharadwaj, Gautam Navlakha, Vernon Gonsalves and Arun Fereira. Gautam Navlakha, one of the accused. (Photo: Mail Today)

A senior police officer told Mail Today that the investigation will focus on exploring various angles that could to establish a link between the arrested activists and the Maoists. “It is a wrong perception that they were arrested for plotting to kill Prime Minister Narendra Modi,” said the officer, adding, “Our case is much wider. We are investigating whether there are some foreign elements also involved in the activities.”

Param Bir Singh, additional director general of police (law & order), had claimed that the activists were in touch with left organisations from France and US. And that they had held several meetings in India as well as in Paris and Myanmar.

The next challenge before the police is to prove that Rao and Navlakha were involved in the procurement of weapons like M4 grenade launcher and machine guns at Rs 8 crore. They will have to establish that the weapons were really purchased and reached India. The other task will be to establish their claim that Bharadwaj had sought financial help from the Maoists.

The police investigation has not moved into the alleged funding of Rs 15 lakh by banned Communist Party of India (Maoist) in two installments for organising the Elgar Parishad, a conclave, in Pune on December 31, 2017, on the eve of the riots at nearby Koregaon-Bhima. 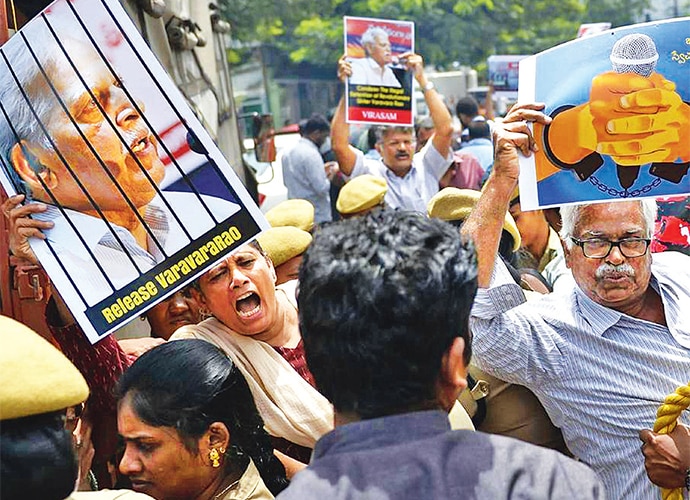 The activists, whose arrest ignited protests, will be under house arrest for a month. (Photo: Mail Today)

They will have to build a case within a month till when the activists shall remain under house arrest. The police have indicated that they will take the help of the central agencies to investigate the ambush that has taken place in Chhattisgarh in the last two years. This investigation is necessary to establish their claim that Rao had asked the Maoist cadre to set an ambush against the security forces at several places in Chhattisgarh.

Fadnavis said it was the conspiracy against the entire country by creating unrest.

“As rightly said by the SC those under question cannot have choice of investigation agency. We will unearth entire conspiracy and have enough evidences to convict them.” He said that this urban Maoism phenomenon is a cover up for all illegal activities on the ground and in our tribes. “We see it is not only Maoism but they have linkages with the separatist groups in Kashmir,” he said.