Taliban orders Afghan women to cover up from head to toe or else...

The Taliban has ordered Afghan women to cover up from head to toe or else face dire consequences.

Women’s faces have become the latest target of the Taliban in Afghanistan. This time the rule bans women from showing their faces or bodies or in other words, their existence in public.

The Talibs have imposed a new dress code for Afghan women, and women are not allowed to step out of their homes.

#Taliban Ministry of rights and virtue of Taliban Announce this ?? as a dress code for women while stepping out of home, those who disobey will face consequences they say!If Immediate Action not taken Next will be prohibition of women Even stepping out of home. pic.twitter.com/e5EJcCvgYN

The Taliban have mandated that women cover themselves from head to toe in a burqa (Afghanistan is a country known for its extreme summers and winters. At this time, temperatures in provinces like Kandahar and Helmand range between 39-41 degree Celsius. Though, in Kabul, temperatures are on the cooler side).

Every society has the freedom to live in accordance with its values and beliefs based on international law. Hijab is both a symbol and a significant value in Afghan society. Thus, no one may represent another society; instead the leaders are representatives of their own societies

The Taliban mandates that women can wear: 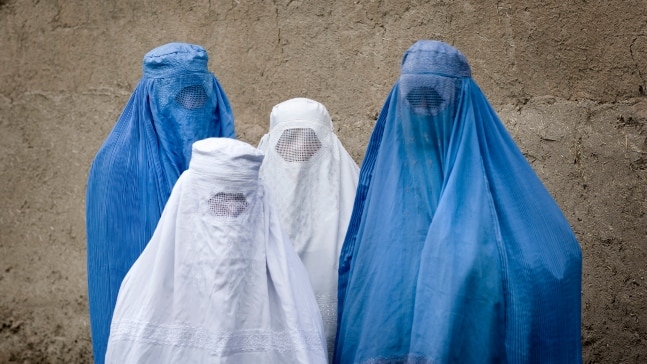 But Afghan women have almost always been defined by their faceless, blue burqa-covered figures. So, what is new in the Taliban’s latest order?

Well, the new decree dictates punishment if women don’t abide by the dress code. If women are found without the dress code in public, then their marham or male guardian will be subjected to punishment.

One thing that the world knows now, is that the Taliban is most afraid of women and their bodies, wanting to wipe out half of its population from existence. Their rule treats women as such lower-class citizens that they aren’t even held liable for not following the order, and the punishment is borne by the masters or male guardians.

In other words, the Taliban order addresses men, not women, about what women should be allowed to wear. Afghan men are ordered to dictate their women to wear the head-to-toe covering while stepping out of their homes, or face punishment if their women don’t abide by the rule.

The new decree is just one among several state-sponsored atrocities on women in Afghanistan. Afghan women are also not allowed to step out of their homes without a male guardian.

The announcement was met with criticism and condemnation from around the world. UN Secretary-General Antonio Guterres urged the Taliban to keep their promises on upholding women’s rights.

I'm alarmed by today's announcement by the Taliban that women must cover their faces in public and leave home only in cases of necessity. I once again urge the Taliban to keep their promises to Afghan women & girls, and their obligations under international human rights law.

But the protest on Twitter is just as flimsy as it can get, read below why:

An Iranian journalist, Masih Alinejad, posted a monologue sympathizing with Afghan women under the Taliban, protesting against both the Iranian government and the Taliban rulers’ dress mandate for women. She condemned the Western countries for allowing her oppressors – the Iranian government – to be elected to the UN’s top women’s rights commission. And she warned that next, her oppressors will get the Taliban into the women’s rights body as well.

Taliban decided to cover women’s face. When we the women of Iran & Afghanistan protest against forced hijab, Western female politicians wear hijab in front of our oppressors. Why? Handmaid’s Tail is a fiction for you but for us, is the reality #letUsTalk pic.twitter.com/xyHQXm9LNi

The new order takes Afghan women’s progress back to square one; back to decades ago. Of course, when it comes to ridiculous rules, we can also count on netizens to make it just as ridiculous.

Some netizens said that the Ministry of Taliban has elevated women to the job of the dementors from the Harry Potter series.

The struggle for Afghan women is real, especially for those who don’t have any male members in their families. Marzia, a 50-year-old university professor from Kabul, told Al Jazeera, that she’s a single unmarried woman, who’s the sole breadwinner of her family consisting of only her mother. Marzia lost her father long ago and her brother was killed in an attack 18 years ago.

Once when she was travelling to her university for work in a taxi, she was stopped by the Taliban, who questioned her about her male guardian. They didn’t listen to her reason and asked her to get out of the taxi. She says there were several times she was forced to walk several kilometres to her university.

The situation in Afghanistan reminds us of The Handmaid’s Tale – a novel by Margaret Atwood and also adapted into a TV series by the same name – which tells of a dystopian society in the future. A still from The Handmaid's Tale. Photo: Getty Images

In the fictional story, the US government is overthrown by a fundamentalist regime, which turns the US into a dictatorship. In the theocratic state, women are reduced to lower-class citizens. Their rights and movements are dictated by men in power.

Women are mostly reduced to giving birth to the children of ‘commanders’ (men of high ranking), taking care of the domestic chores, etc. They are stripped of any rights and individuality.

It depicts a modern society that has regressed back to the medieval period.

In recent times, the story of The Handmaid’s Tale sounds too familiar for comfort. From the US Supreme Court planning to strip American women of abortion rights (hence reproductive rights) to the Taliban in Afghanistan telling women what to wear, part by part it seems like the world is living a real-life Handmaid’s Tale. So are we ready to board the dinghy to civilisation yet?

#Afghanwomendresscode, #Talibanrestrictionswomen, #Talibanwomen, #Afghanwomen
The views and opinions expressed in this article are those of the authors and do not necessarily reflect the official policy or position of DailyO.in or the India Today Group. The writers are solely responsible for any claims arising out of the contents of this article.