Why China's push for Africa should concern India

Beijing has been Africa’s largest trading partner since 2008.

The Western media may be raining on China and its Belt and Road Initiative, but Africa appears quite gung-ho. According to the South African President Cyril Ramaphosa, China’s relationship with Africa is now entering “the golden age”. He was speaking at the end of the seventh Forum for China-Africa Cooperation (FOCAC) summit in Beijing last month.

African leaders tartly comment that Western countries which do not come up with either aid or investment should keep their opinions to themselves. Many African leaders are miffed at human rights conditionalities that comes with Western aid anyway.

China is Africa’s largest trading partner since 2008 with goods worth $170 billion being traded in 2017. Trade volume of the US and Africa is not even one-third of that amount. But the direction of the trade has been one way — raw material and unprocessed goods flow from Africa to China, while cheap manufactured goods flow the other way. Awareness of this and the pressure exerted by the African leadership shaped the summit and the Chinese response, especially in relation to promoting African exports to Beijing. 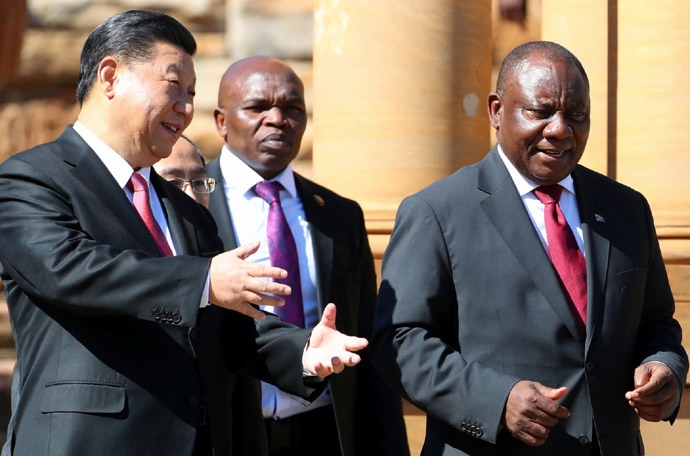 China has been Africa’s largest trading partner since 2008 with goods worth $170 billion being traded in 2017. (Photo: Reuters)

At the summit, Xi Jinping offered Africa another $60 billion in financing for Africa, saying that the money came without any political strings attached. Of this sum, $15 billion would be in the form of grants, interest-free loans and concessional loans, $20 billion in lines of credit, $10 billion for a development financing fund and $5 billion to promote the financing imports from Africa.

According to Xinhua, Xi committed China to eight major initiatives in the next three years and beyond in industrial promotion, infrastructure connectivity, trade facilitation and green development.

On industrial promotion, Xi said a China-Africa trade expo would be set up to encourage Chinese companies to invest in Africa. In addition, China would carry an extensive programme to enhance African agriculture. In addition to all this, China also committed itself to offer vocational training for 1,000 high-end technical personnel and provide 50,000 government scholarships and an equal number of opportunities for young Africans to participate in seminars and workshops in China.

China is already involved in a slew of infrastructure connectivity plans in Africa, ranging from the upgradation of the Nairobi-Mombasa railway to the building of Bagamayo port and they have enhanced their presence in other countries as well.

Some of these are self-serving and even Beijing is realising that no interference policy has limits. Its involvement in the Zimbabwe coup against President Mugabe in 2017 remains murky. China has not been shy about involving itself in internal issues, say, in Myanmar.

Security is an important aspect of China’s African policy. China has invested in the oil industry of South Sudan and some years ago it had to evacuate some 350 Chinese oil workers because of instability there. In 2011, China had to evacuate 35,000 people from Libya, and more recently from Yemen. All this has led to the Chinese setting up their first overseas military base in Djibouti. China has not been shy about involving itself in internal issues of other countries. (Photo: Reuters)

As part of its diplomatic efforts in Africa now, China is also setting up a China-Africa peace and security fund which will provide free military aid to the African Union and a number of security assistance programmes will be taken up in the areas of UN peacekeeping, fighting piracy and counter-terrorism.

India has woken up somewhat late to the opportunities that Africa presents despite the fact that East Africa is part of the Indian Ocean littoral and India has had historic trade and cultural ties with several countries there. It lacks the kind of resources that China can deploy, but it nevertheless has important equities there, ranging from a diaspora, to corporates who have considerable experience in dealing with Africa. India, too, hosts Africa summits, called the India Africa Forum Summit, the first of which was held in 2008 in New Delhi.

There is an awareness now of the African economic potential — it houses six of the world’s fastest growing economies. But more than anything the recent shift in India’s approach has been driven by China’s activism there. New Delhi cannot match China’s investment and aid, but it is working along other options. One of these is the Asia Africa Growth Corridor, an Indo-Japanese venture that seeks to promote connectivity and economic relations with Africa.

#Focac, #China-africa cooperation summit, #One Belt One Road, #United States
The views and opinions expressed in this article are those of the authors and do not necessarily reflect the official policy or position of DailyO.in or the India Today Group. The writers are solely responsible for any claims arising out of the contents of this article.