Former UP CM and SP leader Akhilesh Yadav comes down hard on the BJP government in UP for degrading law and order, government’s misuse of state officers and under the table meetings with gangster of the state.

As the battle for UP 2022 gets more intense, political leaders are dropping their bombshells on their rivals. Akhilesh Yadav in UP has taken the centrestage this time to go head to head with the BJP in UP. Unlike 2017, Akhilesh Yadav has kept his family members away from the limelight this time around, and has himself taken the lead in leading the party in the state assembly elections.

Akhilesh Yadav even buried the hatchet with uncle Shivpal right ahead of the polls, just to get the things to fall in line for him. With just 13 days to go for the first phase of polling in UP, Akhilesh Yadav keeps his fists clenched and his tone stern in his criticism of the BJP.

In the interview with The Lallantop, Akhilesh Yadav talks about the dire state of law and order in UP, misuse of bureaucracy by state government and government's laidback approach towards gangsters.

Here are the 10 highlights from the interview:

1. 'PRIVATISATION NOT THE RIGHT OPTION'

Calling the recent acquisition of Air India by the Tata Group inappropriate, Akhilesh said that privatisation threatens the constitutional rights which were given by BR Ambedkar. He wanted to draw attention to the fact that backward castes will not get their due in the privatised companies.

“This is the same party that said an individual wearing slippers would fly in an aeroplane. Now they are selling airports. BJP even sold the government airlines. If everything will be outsourced by the government, then there might be a day when the BJP outsources the governance also,” Akhilesh said.

The former Chief Minister called the recent opinion polls 'opium polls'. “These polls are not opinion polls but opium polls which mislead people. The ground reality is different. Who knows it better than the media. Who will believe these opium polls?” asked Akhilesh.

The opinion polls have shown the BJP ahead in UP elections 2022. Akhilesh even wrote to the Election Commission asking them to stop opinion polls, which he said were building a fake perception of the BJP. Akhilesh said that he has no links with gangsters, as alleged by the BJP; and instead blamed the BJP for being in cahoots with gangsters and the mafia. “What about our baba CM then?” asked Akhilesh, in a dig aimed at UP CM Yogi Adityanath.

Yogi Adityanath, in an interview with The Lallantop earlier this month, had said that 'people should be provided relief from these gangsters in any manner'.

Akhilesh Yadav blamed CM Yogi Adityanath for going slow on gangsters, and accused the UP CM of being the 'first CM who spent nearly three hours in jail meeting a gangster'. Yadav went on to add, “I am alleging this; you can investigate it.”

Akhilesh Yadav said the government has been lenient towards criminals like Dhananjay Singh, 'who is roaming free in UP'.

“How can a criminal who has a prize money of Rs 25,000 be freely playing cricket in Jaunpur and the government and police don't know about it? Packed food is being sent to jails. How is this happening? When Sanjay Chauhan was contesting elections in Chandauli, who had organised the meeting of mafias? Weren't BJP leaders involved in that?” Akhilesh asked.

4. 'PLUMMETING LAW AND ORDER IN UP'

Akhilesh Yadav also hit out at the Yogi Adityanath government for lawlessness in Uttar Pradesh. He gave the example of a businessman, Manish Kumar Gupta, who was killed in a Gorakhpur hotel on September 27, 2021. Yadav also cited the custodial death of a 17-year-old teenager, Rahul, in UP’s Lakhimpur Kheri District on January 24, 2022.

Talking about the absconding of police personnel in UP’s Jaunpur, where 9 policemen were on the run after the custodial death of 24 year-old Krishna Kumar Yadav, Akhilesh said that state’s law and order is 'down to the ground'. The former UP CM also came down heavy on the state bureaucracy, saying that one IPS officer is accusing another under the BJP government.

5. 'CRIMINAL CASES AGAINST YOGI AND MAURYA'

He asked if Yogi Adityanath would disclose how many IPC sections were slapped against him when he went to contest the elections the last time. "Will the Deputy CM tell how many cases are registered against him?" asked Akhilesh, adding that Yogi Adityanath is the 'only CM of the country who has withdrawn cases against himself'.

There is a slight twist in the tale.

When Akhilesh Yadav was the CM of UP from 2012-17, in 2015, he had the option of proceeding with the cases against CM Yogi Adityanath, who was then the Lok Sabha MP from Gorakhpur. But Akhilesh chose to sleep over it to prevent the loss of hardcore Hindu votes in the 2017 Assembly elections. The gamble, however, didn’t pay off because the SP leader lost the 2017 contest miserably. 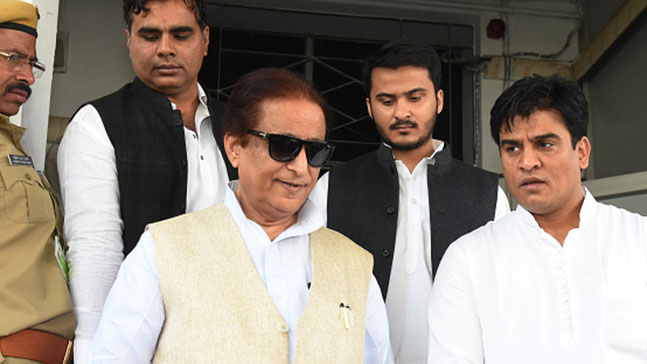 One of the main talking points these UP elections is jailed Rampur MP Azam Khan, who Akhilesh said was falsely implicated in cases by the BJP government. Akhilesh's Samajwadi Party (SP) has given tickets to both Azam Khan and his son Abdullah Azam Khan in the Rampur district.

The SP leader said that gross injustice was done to the family of Azam Khan and that the public knew about it.

Akhilesh said the BJP government sent an IPS officer who wanted an extension only on the condition that he would get one if he falsely implicated Azam Khan in criminal cases. He said that the Congress as well as the BJP are together involved in the incarceration of Azam Khan in Rampur.

"There was a lot of injustice done to Azam Khan, and both Congress and BJP are responsible for this," said Akhilesh Yadav.

7. 'GUJARAT WILL TEACH A LESSON TO THE KILLERS OF GANDHI'

The former CM said that not UP, but Gujarat will spring a big surprise to the BJP in the upcoming elections.

“If there is surprise anywhere, it will be in Gujarat where people have made up their minds that the killers of Gandhi should be taught a lesson. There will be no surprises in UP. People have given an indication to the BJP that SP is forming the next government,” Akhilesh said. Asked if Akhilesh could have continued with the alliance with the BSP in 2022 UP Assembly elections, given that the state elections and Parliamentary elections have different voting patterns, Akhilesh said that he wanted to continue the alliance but BSP supremo Mayawati refused.

"I wanted both parties to work together because Dr Ambedkar and Ram Manohar Lohia wanted to work at a time. For some political reason, she refused the alliance. But SP wanted the alliance of caste-based parties to go together," Akhilesh said.

Akhilesh specifically said that BSP is contesting to defeat SP, and not BJP, in the upcoming Assembly elections 2022. BSP and UP’s other small parties are fighting the elections to prevent SP from coming to power. They have no anger with the BJP but with SP coming to power, said the former UP CM.

Akhilesh said that BJP itself doesn’t want the caste census to be done in Uttar Pradesh. Calling the party’s Sabka Saath Sabka Vishwas a mere slogan without substance, Akhilesh said, “The ones who are talking of Jinnah and Ganna [sugarcane]: when will they start counting caste in UP?" he said. Yadav also said that the BJP should clearly tell whether they will or will not conduct a caste census.

The former UP CM said that the BJP destroyed the Purvanchal Expressway, the high infrastructure project, which was 'started by us'. Akhilesh said the BJP gave tender to inefficient companies to build the highway.

“The alignment of 341 kms of Purvanchal Expressway was built by us. Consent of almost 70% farmers was taken and more than 50% of the land was acquired. The idea was to build a highway where the driving quality was good. Today, if you are riding at 100-120 km/hr on the Purvanchal Expressway, you may break your spine or fall sick. Who is responsible for this?” Akhilesh asked.