Both views of J&K quote 'Insaniyat, Jamhooriyat, Kashmiriyat'. But there are also very significant differences between the two views.

When Amit Shah took over as the country's Home Minister on June 31, there were rumblings over how the Indian government's policy towards solving the Kashmir problem was headed for a decisive turn. Many predicted a high-handed, 'muscular' policy, with the armed forces leading the charge, involving a major crackdown on both terrorists and separatists.

Shah, however, has offered a policy mixed with surprises and shocks.

Speaking in the Lok Sabha on July 1, Shah mentioned former Prime Minister Atal Bihari Vajpayee and spoke of how he was committed to following 'the Vajpayee doctrine' — which talks of solving the Kashmir problem within the realm of 'Insaniyat, Jamhooriyat, Kashmiriyat'.

A closer look at Shah's interpretation of the Vajpayee doctrine, however, shows that the two policies are in fact far removed.

First, a look at what the Vajpayee doctrine was all about.

The Vajpayee doctrine on Kashmir coined the slogan 'Insaniyat, Jamhooriyat, Kashmiriyat' — which meant humanity, peace and keeping the sanctity and culture of the people of Kashmir. His doctrine aimed at achieving stability, progress and prosperity in the Valley. The doctrine also included an idea of improving relations with neighbouring Pakistan. Talks with Pakistan were quite an important part of Vajpayee's idea of peace in Kashmir.

Speaking in the Lok Sabha on 21 April, 2003, the former PM had defined his plan to deal with the issues concerning J&K. He spoke of economic projects in areas such as the development of road and rail infrastructure and creating job opportunities for Kashmir's youth. 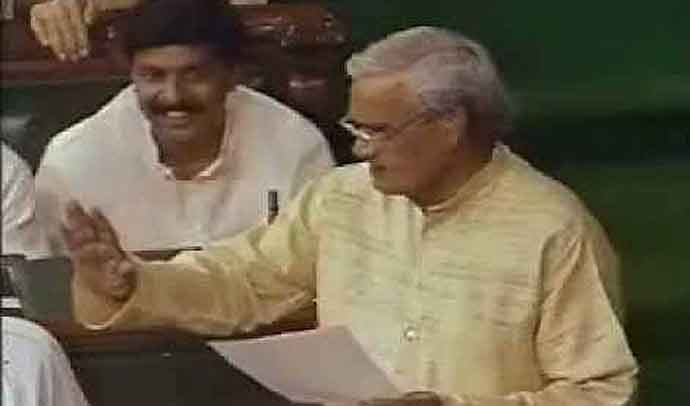 Regarding relations with Pakistan, Vajpayee had said, "We have extended our hand of friendship to Pakistan. Let us see how Pakistan responds. Stopping cross-border infiltration and destruction of terrorist infrastructure can open the door for talks. Talks can take place on all issues including Jammu and Kashmir."

Vajpayee said guns could not solve problems. "Issues can be guided by the three principles of insaniyat (humanism), jamhooriyat (democracy) and Kashmiriyat (Kashmir's legacy of amity)," he said.

In his speech in Parliament, Shah said straight out that 'jamhooriyat' or democracy in Kashmir should "not be restricted to three families".

Right after the government took charge at the Centre, there was speculation that the government was planning the delimitation of Assembly constituencies in J&K. These rumours started doing the rounds right after Shah met J&K Governor Satya Pal Malik.

For years, the BJP has held that the Valley was overrepresented in the state Assembly — leading to the marginalisation of Jammu and Ladakh. The buzz was enough to spark discussions on equal representation of all three regions in the 'jamhooriyat' of the state.

On Kashmiriyat, Shah said the government hopes to see the return of Kashmiri Pandits and Sufis to the Valley. And on Insaniyat, he mentioned the social welfare schemes that have benefitted people of the state along with other parts of the country.

There is no room for Pakistan and no scope for separatists to stake claim in this peace process that Shah is setting into motion.

Neither Pakistan, nor Kashmiri separatists have helped the peace process. Shah rightly pointed out that while separatists instigated Kashmiri youth to pelt stones at security forces, their own children were found receiving elite educations abroad.

Significantly, during his visit to the state in June-end, Shah met the family of deceased police officer Arshad Khan, killed in an encounter in Anantnag on June 12. The gesture came to be widely applauded as Shah's attempt to provide a 'healing touch', definitively ticking the 'Insaniyat' box for Shah. Police and security officials say there has been virtually no cross-border infiltration so far this year — a marked departure from previous years.

The Army usually tracks infiltrations through the number of face-offs at the LoC. This year, there have been none.

According to a report, the J&K police, which uses ground intelligence to find new infiltrators from Pakistan, also confirmed 'a significant drop'.

Militants reportedly made 133 infiltration attempts in the first six months of 2018. From January to June 2018, 14 militants and one security force personnel were killed on the border during encounters between infiltrators and security forces.

However, given that the Modi government has struck at the fund supply chains of separatists from its first term itself, it would be difficult for these militants and stone-pelters to keep up the momentum for too long.

With huge support for calling out Pakistan in backing terrorism in Kashmir and talking of talks in the same breath, Shah certainly has massive support behind him to implement the Vajpayee doctrine in Jammu and Kashmir — in his way, of course.