Big challenges, bigger intent: Why Budget 2019 will be the Modi govt's most exciting test so far

Modi 2.0 can't blame the prior govt for any economic weaknesses. Neither can it afford to slow investments or reforms, for these could be the key to its continued political strength.

This week, all eyes will be on the first Budget of Modi 2.0. In many ways, it is going to be the most challenging Budget that the Modi government has tackled so far. Also, it could turn out to be the most defining Budget of the 'Modi era'.

Returning with a historic mandate like May 2019 puts a huge onus on the National Democratic Alliance (NDA) government. With Lok Sabha elections concluded and no major Assembly polls in sight, populism can be sent for a short vacation. But expectations of different constituencies cannot be wished away. So far, tokenism has not been a part of Modi's rule book. He also does not believe in half-hearted measures. Therefore, this need not be a 'please all' budget. The new Finance Minister, Nirmala Sitharaman, will have to make some tough choices. He doesn't need to please all: But there is a lot of hope from the Modi 2.0 Budget. (Photo: PTI)

Modi 2.0 does not have the luxury to blame its inheritance from the previous government. Its performance on the economic front will be judged as a continuation of the Modi 1.0 report card. The ones who will be looking at it most intently are international investors. The Modi government is surely aware that telescopes from across the seven seas are trained on India. Since Modi never doubted his return as Prime Minister, he must have tasked his team to work out a road map for Modi 2.0 much in advance.

A major criticism against Modi 1.0 was that he lost precious time in the first two years when his political stock was at an all-time high, not kick-starting reforms — in hindsight, it appears that Modi was playing with a longer-term game plan. He invested his political capital on GST, Digitisation and Direct Benefit Transfer (DBT) to prepare the ground for big-ticket structural changes in his second term.

Now, with total dominance in the Lok Sabha and a majority in the Rajya Sabha within striking distance, there is little excuse for Modi to be defensive. The Opposition has never been in greater disarray. So, now is the time when Modi can afford to go for the jugular. But in economics, as in life, there aren't any easy answers — and certainly no magic bullets. The global economic scenario, sanctions on Iran impacting oil prices and the US-China trade stand-off, and prospects of inadequate monsoons at home, pose further challenges.

Traditionally, reforms are considered to be synonymous with foreign investment. But inviting guests for a party before setting the house in order can lead to serious embarrassment. The internal economic environment and political climate must be conducive for disruptive changes. Politically, one cannot hope for a more stable condition. But the economy is perilously perched especially on the agriculture front. Unless a safety net is provided to the farmers, the resilience of the rural economy to absorb shocks will be seriously restricted.

So, if Nirmala Sitharaman opens her purse strings, by way of relaxing the fiscal deficit, it would only be to augment farm income in the short term — while opening the window for Foreign Direct Investment in retail with clear commitments for backward linkages. But this needs to be accompanied by reforms in the commodities market and a large-scale overhaul in the storage and supply chain for agricultural produce. 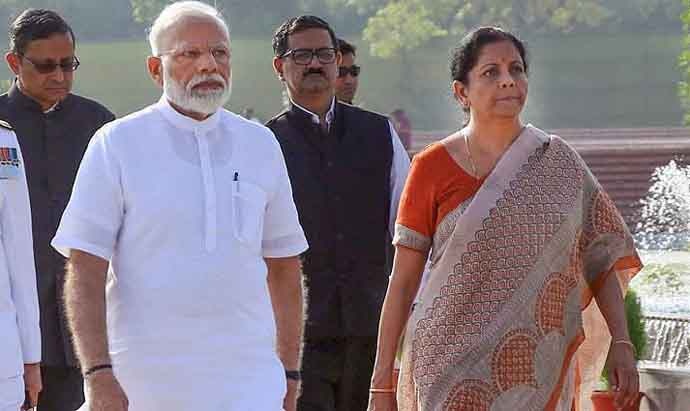 The economic challenges are enormous: Can they take them in their stride? (Photo: PTI)

The benefits of the Goods and Services Tax (GST) regime for long-haul logistics and investments in better warehousing facilities (in place of the old Food Corporation of India godowns — which only store to spoil) are yet to be realised.

This government cannot shy away from Public Sector disinvestment any longer. No amount of tinkering or cosmetic changes of ownership will work. If Modi 2.0 with a 350+ strength in the Upper House cannot push it through, we shall have to wait for another 1991 kind of crisis before it happens with our back to the walls. Getting the sick and inefficient PSUs up and running in full steam can be a quick win for the manufacturing and industrial sector.

One of the understated achievements of Modi 1.0 was the exponential growth in air connectivity by the UDAN scheme. However, its benefits were not fully realised due to the high cost of airfare. Bringing Jet Airways back to life and making Air India great again by inducting new owners could be transformative. Make Jet fly again? If the Modi govt brings Jet Airways back to life, it could provide the economy a boost. (Photo: Reuters)

The Indian Railways infrastructure is an unmatched asset that India has, compared to many developing countries. In a country as vast and populated as ours, railways will remain the arteries of the nation, even more than roads. China realised it and hence, put immense investment in railway connectivity, not just within the country but across continents. 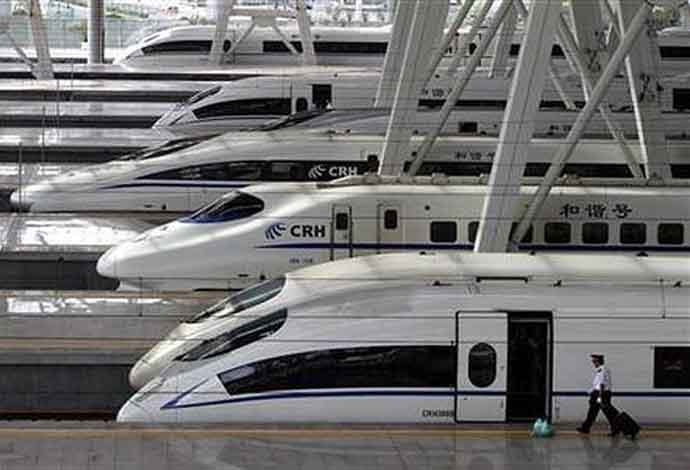 Making Tracks: China has invested heavily in building its rail network — India should do so as well. (Photo: Reuters)

Modernising the railways and the introduction of high-speed luxury trains is only the icing on the cake. Improving efficiency, safety and providing reliable punctual service with better amenities is also only part of the job. But the scope of network expansion in remote parts of the country as in the Northeast is far from exhausted. However, the major task ahead is development of the freight corridors and increase in rolling stocks which need to be literally fast-tracked.

The thrust on infrastructure — especially roads — that had picked up pace towards the latter half of Modi 1.0 cannot be allowed to slacken. State governments are strapped of cash with a plethora of welfare schemes and loan write-offs. So, the Centre will have re-double its efforts by accelerating mega projects like the Sagarmala link.

With banking reforms and loan restructuring, infrastructure companies should once again be able to raise finances for PPP projects and the sector can attract foreign players if the government sheds its phobia. International companies can bring in new technology that can enhance both the quality and speed of construction.

As road networks and air connectivity improve, the next surge of real estate will happen in Tier 2 and Tier 3 cities.

Smart villages will have to grow alongside smart cities. Investment in rural infrastructure and the promise of a roof over every family and electricity in every household cannot be left for the last two years of the term. Budget allocations for the game-changing programmes like PMAY (Pradhan Mantri Awas Yojna) and rural electrification scheme cannot be curtailed to ensure Narendra Modi's ambitions for 2024 are met.

Regulations on builders, incentive for green energy efficient buildings and relief for lower and middle-income homebuyers by tax credit for interest on housing loans would go a long way in re-injecting life in the real estate sector.

The momentum that Make in India was beginning to gather during Modi 1.0 needs another boost. The time for India becoming the manufacturing hub has come. We have to select areas of competence and focus our energies behind those sectors. In the short-term, it would yield exponential returns. For that, 'ease of doing business' has to become much more than a rank and be actually seen and felt by investors.

Sitharaman in her previous role as Defence Minister had initiated work on the defence corridors in Uttar Pradesh and Tamil Nadu. Now, as Finance Minister, she would want to take defence production to the next level. Hopefully, with controversies like Rafale behind us, the benefits of 'offsets' will begin to materialise, as indeed new contracts in the pipeline.

This could be India's competitive edge over many of its peers. She knows it all: As finance minister, Nirmala Sitharaman could take defence investment to the next level. (Photo: PTI)

How the trinity of Narendra Modi, Subrahmanyam Jaishankar and Ajit Doval will deal with Donald Trump's Huawei 5G challenge is not known.

But as we have seen in the last five years, the services sector, which is going to be the engine of job creation, grows on the spine of telecom connectivity. Jio alone cannot catapult India to the next giant league.

And jobs, gainful employment, are what the young aspirational Indians and their parents who voted for Modi — cutting across caste, community and economic strata — are looking for.

Finally, will it be a Budget for industrialists, Foreign Institutional Investors, the kisaan or the common man?

Given the mood of Modi 2.0, it is most likely to be a Budget for New India.

#Job crisis, #Nirmala Sitharaman, #Narendra Modi, #Budget 2019
The views and opinions expressed in this article are those of the authors and do not necessarily reflect the official policy or position of DailyO.in or the India Today Group. The writers are solely responsible for any claims arising out of the contents of this article.