Talk About What? India should not waste a second with the Hurriyat, Pakistan's poisonous spent force

If Delhi talks to anyone, it must be to Kashmir's elected representatives and other stakeholders, not waste time on the perfidious and pointless Hurriyat, which has only harmed India's interests.

The visit of Home Minister Amit Shah to Jammu and Kashmir, and the fact that for the first time in decades, normal life in the Kashmir Valley was not disrupted by a strike call from separatists, has fuelled speculation that something might be cooking behind the scenes and some sort of a dialogue could soon commence between the Centre and the separatist amalgam operating under the label of the 'Hurriyat Conference'.

But in all the breathless excitement in the media and political circles over the possibility of yet another political initiative in Kashmir, what is being glossed over are the fundamental questions — what will the talks be about? What will be the framework of these talks? Will these be talks only for the sake of talks or will they be the beginning of a negotiated settlement to solve the ‘political problem’ in Kashmir? Beyond One Trip: The Home Minister's visit to Kashmir has been surrounded by breathless speculation. (Photo: Twitter)

And, while we're at it, will someone clearly state what this ‘political problem’ is?

Assuming someone can clearly state the ‘political problem’, can all those who mindlessly keep parroting the need for a ‘political solution’ also lay down the contours of this solution, rather than just talking in the air, mouthing inanities, just because they are ‘politically correct’ in the circles they move in?

As things stand, there is absolutely no indication that the Hurriyat has given up on their separatist agenda.

Nor is there anything to suggest that they are no longer tied to strings that are pulled by their Pakistani masters.

Therefore, if and when there is a dialogue with the Hurriyat, what will it be about? What will the Indian government bring to the table that it believes will satisfy the Hurriyat? And what does it expect the Hurriyat to offer?

After all, negotiations are all about giving and taking. So, what will the Modi government be ready to give that is more than what Kashmir already has both politically and constitutionally — and what will it get in return? Is it conceivable that the Modi government has been taken in by the fanciful slogan of the Vajpayee years of a political solution based on ‘Kashmiriyat, Insaniyat, Jamhooriyat’? All those who keep mouthing this as the framework for a ‘political settlement’ have never quite explained what this means in practical terms. 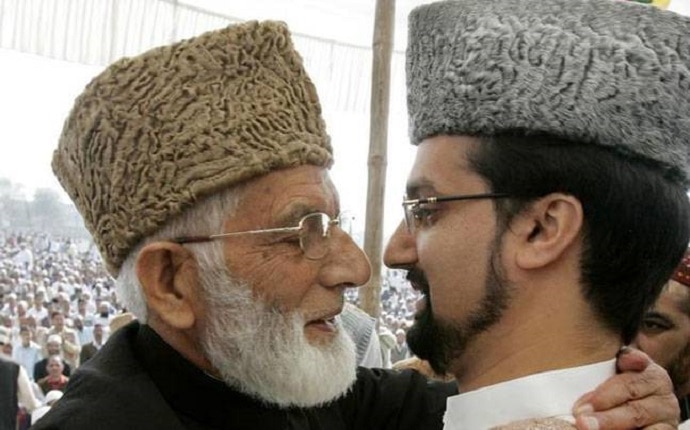 Hugging the Huriyat? What can this spent force sponsored by Pakistan even offer anyone? (Photo: PTI)

Even if it is assumed — and this would be an extremely ‘heroic’ assumption — that a section of the Hurriyat is ready to throw in the towel because they have realised the folly, even futility, of their ways, and need a face-saver, what can the Indian state offer? At best, status quo. That is to say that the ruling BJP will back down on things like Article 370 and Article 35A and not press for fresh delimitation in the state. There is also a good chance that many of the Hurriyat leaders who are in the cross-hairs for their involvement in terror financing and money laundering might be let off the hook. And of course, there could be the extra sweetener of promising them a smooth passage into the state Assembly.

The problem is that each of these will have repercussions that will be disastrous for the Indian state — not only will they undo every gain that has been made over the last few years, they will also not lead to a lasting political settlement in Kashmir. If anything, this move will create conditions for the next round of instability by incentivising separatism and providing relief to anti-India forces.

For the BJP government to once again enter into such a Faustian bargain after its disastrous experience of running a coalition with Mehbooba Mufti’s PDP, is mind-boggling, to say the least. 'Milawat ki Sarkar': The BJP's past partnership with the PDP in J&K was a catastrophe from the start. (Photo: PTI)

Tinkering with the political system and interfering in the political process by promoting certain parties and personalities has been the bane of politics in the Valley. If once again India intends to tread the same beaten path, this time, by giving assurances to separatists, then the result will be no different from what it was in the past. As far as dropping cases against the separatists and their front-men is concerned, this will deal a body-blow to efforts underway to dismantle the ecosystem that sustains separatism and terrorism — this will be a virtual get-out-of-jail pass, which will demoralise not just the security agencies but also the people in the region who have stood with the Indian state, not because they were getting paid or receiving any benefits but because they believed in the idea of India.

Finally, on the big political and constitutional issues like Art. 370, 35A and delimitation, there isn’t too much that the BJP government can give. Abrogating 370 is complicated. In any case, it is a bit of a red herring. It hasn’t stopped the government of India from doing what it needed to do, when it needed to do it, in Jammu and Kashmir.

If 370 stays in the statute books, the heavens won’t fall — and if it is removed, it won’t prove the magic wand that will solve the mess in Kashmir.

35A is much easier — it has to go. There is no way it can remain in the Constitution.

In fact, its very existence is a travesty which, if allowed, would pave the way for the mutilation of the Constitution. It actually opens the gate for any government to insert anything in the Constitution through the backdoor of a Presidential order. But while 35A can and must be declared unconstitutional, some of the provisions of the article can be brought back by the state legislature — provided they are in conformity with the Constitution and do not discriminate on gender or other grounds between state subjects.

Of course, the governor can refuse to give his assent to such a bill — but that is another story.

Article 35A surreptitiously inserted by Pt. Nehru’s govt. in the Constitution in 1954 vide Presidential order is responsible for discrimination by the J&K govt. between two categories of citizens on the basis of declaring some as permanent residents while leaving out the others.

Lastly, delimitation is a constitutional requirement and it is unconscionable to refuse appropriate representation to some regions and give excess representation to other regions. As long as delimitation is done on the basis of objective criteria, there is absolutely nothing wrong with it. But to merely deny delimitation because the Valley might lose a couple of seats to Jammu and Ladakh would be an injustice to these two regions.

To view delimitation purely from a communal lens would also be wrong because it is entirely possible that the increase in Jammu and Ladakh seats isn’t necessarily going to be in places where the non-Muslim population is higher. And even if this were the case, are the non-Muslim state subjects not entitled to the same privileges that the Muslim subjects enjoy in terms of representation?

Which brings us back to the main question — what will the government talk to the Hurriyat about?

What is it about Delhi that it leans over backwards to cultivate and woo people who undermine India, but treats with disdain those who throw their lot in with India? If Delhi must talk to anyone, it must be to the elected representatives and to other stakeholders and address their concerns and problems, not waste time on spent bullets of the Islamic State of Pakistan.

Such talks must be about taking the state forward, not taking it back in time.