The Union minister of skill development and the five-time Lok Sabha MP from Karnataka is mouthing what RSS chief Mohan Bhagwat has said a long time back.

The not-so-sporadic utterances of the Rashtriya Swayamsevak Sangh chief Mohan Bhagwat have now been stamped with the words of approval from a Union minister in the Narendra Modi government. MoS skill development in the Union cabinet and five-time Lok Sabha MP from Uttara Kannada in Karnataka, Anant Kumar Hegde, has openly declared that the ruling regime intends to “change the Constitution”, which he dubs “Ambedkar Smriti”, in order to deal with the word “secular” from the Preamble.

Hegde, an RSS member and one-time ABVP activist, often euphemistically called a “firebrand leader” to indicate his undiluted expertise at spewing targeted, timely Hindutva vitriol aimed at poll-bound states, has said that the word “secular” is respected only because it’s part of the Constitution and that this will be taken care of in the days to come. Hegde, addressing an event organised by the Brahman Yuva Parishad in Koppal district of Karnataka, also said that “secularists” are like “people without parentage” who don’t know their “bloodline”.

“There is a new culture now of secularists. If someone says I am a Muslim, or I am a Christian, or I am a Lingayat, or I am a Hindu, I feel very happy because he knows his roots. But these people who call themselves secularists, I don’t know what to call them,” said Hegde. As reported in Kannada media, the most likely BJP CM face in election-bound Karnataka has said that the purpose of the BJP is to align the Constitution with values not hijacked by secularism, in which people could identify according to their caste and religion, and according to bloodlines.

“We [BJP] are around only to change the Constitution of India; that’s why we have come to power”—Union minister Ananth Kumar Hegde. pic.twitter.com/L4O7GogP62

Not only is this a simple replay of Mohan Bhagwat’s oft-repeated sermons, many a time televised nationally, this is basically the Sangh Parivar’s open secret that’s no longer spoken about in hushed tones but flaunted openly. A number of times Bhagwat has urged the lawmakers to align the Constitution with “Indian value system”, and to “fully integrate Kashmir with India”.

Even with the Assembly elections coming up in Karnataka, a state that is seeing the now-expected rash of communal incidents brewing alike in the streets and on national television, Hegde’s latest comments cannot be dismissed as just another pre-poll soundbite intended to polarise people along religious lines. A cannier version of Yogi Adityanath, Hegde is the face of the educated Hindutva bigotry that’s currently holding the reins of the country, and is fusing dogmatic majoritarianism with surgical strikes on the very law of the land.

A number of Bills brought about by the Modi government – such as the Citizenship Amendment Bill, the Bill to criminalise triple talaq, the Transgender Bill, among others – are intended to install draconian laws that will police and penalise the non-Hindu, sexually non-heteronormative and non-upper caste persons in ways unimagined. 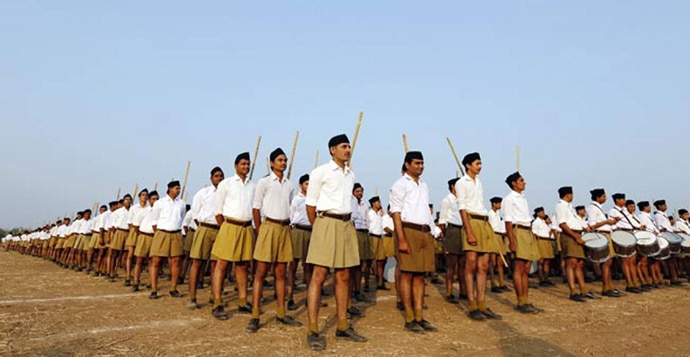 With BJP MPs like Shobha Karandlaje tweeting fake stories with obvious aim to further incite communal hatred in election-bound Karnataka that is currently governed by Congress’ Siddaramaiah, the immediate context of Hedge’s comment on the Constitution might seem to be one of executing the RSS/BJP’s typical communal gameplan. Little wonder then that the sitting chief minister of Karnataka has strongly criticised Hegde, calling him “uncultured”, who “doesn’t know parliamentary or politically correct language. He’s unaware of the country’s social system, and has no respect for the Constitution”.

However, it must be remembered that merely wresting power from the Congress and the creation of “Congress-mukt Bharat” are not the only objective of the Sangh, and its apparatchiks in the Modi government and the state units of the BJP. It is, as is now crystal clear to everyone, to install a Hindu theocratic state, much like the Islamic Republic of Pakistan. And for this to happen, the Constitution must be re-engineered.

"Ananth Kumar Hegde has violated the oath he has taken as MP by saying he will change the Constitution. EC should take suo motu action. Does @BJP4India endorse their Union Minister? If they do, they should face Election on this agenda": V.S. Ugrappa, MLC #BJPUgraAgenda pic.twitter.com/S920PQzFQA

The Modi government’s continued assault on the word “secular” has been happening ever since it came to power in May 2014. But the most spectacular example of its rabid antipathy towards the word secular, and the fierce loyalty it still commands across the length and breadth of the country, was seen when the government omitted the word from its Republic Day advertisement of January 26, 2015, published in leading national dailies. The Preamble was reprinted with the words “Secular and Socialist” missing, and the full-page ads became the eye of a storm that was only the beginning of a never-ending cycle of violence upon the spirit and ethos of the Constitution.

Even though the word secular was inserted in the Constitution in 1976, during the height of Emergency, through the 42nd Amendment, that never took away from its ingrained and indissoluble presence in every fibre of the book that made India a democratic republic, governed by the sovereign people of the country. The BR Ambedkar-led drafting of the Constitution was in every way the antithesis of the caste-driven rigidity and ossification, as codified in Manusmriti, of what ought to have been a dynamic and living, breathing social structure. That Hegde compared the Constitution with Manusmriti in his casual sleight-of-hand, saying both are/were simply written down laws that can be changed, is in itself indicative of the intentional misunderstanding of the Indian Constitution and willing obfuscation of the fundamental rights of every citizen guaranteed by it.

Though Article 368 (1) of the Constitution of India grants constituent power to make formal amendments and empowers Parliament to amend the Constitution by way of addition, variation or repeal of any provision according to the procedure laid down by the Constitution itself, it nevertheless cannot be in contravention of the spirit and ethos of the Constitution, which means it must only extend the inclusive, pluralist principles of the Book by drafting more sensitive laws, and not by doing away with them. Therefore, Hegde’s comment on changing the Constitution to remove the word “secular” is itself unconstitutional to the last letter.

When Hindutva henchmen and their flag-bearers in the government assault the Constitution so, it goes beyond the usual rabid rhetoric against the “sickulars”, online and offline. Hegde’s open declaration shows how far the Sangh has travelled in its journey since its inception in 1925, and adopting the VD Savarkar coined term “Hindutva”, getting banned not once but thrice in its 92-year-old life.

Under any non-NDA government, the clamour to seek Hegde’s resignation would have filled the op-ed pages of newspapers and the current and future sessions in Parliament. That the only criticism has come from the usual secular quarters of the political Opposition and expected sections of the mainstream media is both disheartening and portentous of graver dangers ahead.

Post your comment
#Mohan Bhagwat, #BJP, #Constitution, #RSS
The views and opinions expressed in this article are those of the authors and do not necessarily reflect the official policy or position of DailyO.in or the India Today Group. The writers are solely responsible for any claims arising out of the contents of this article.