Article 35A vs ISIS: Kashmir is with India due to its special rights. Scrapping these will only mean more terrorism

Even the last Dogra royal, Karan Singh, advocates extreme caution on meddling with Kashmir's special rights. Why then is the BJP in such a rush that it can't see the potential dangers?

Amid unprecedented security arrangements in place in Jammu and Kashmir (J&K), the countdown for the apparently imminent removal of Article 35A seems to be underway — putting the already restive state on the edge further.

But the adventurism to scrap Article 35A, it is feared, may prove a misadventure on Kashmir.

While the National Security Adviser (NSA), Ajit Doval, recently made a three-day visit to Kashmir, the Centre also decided to move 10,000 additional paramilitary troops in a pre-emptive measure. Decision pending: J&K is on edge, awaiting an announcement on Article 35A. (Photo: Reuters)

Amid rumours that fly thick and fast, the absence of any formal clarification from New Delhi is only adding to the chaos.

But the news reports, coupled with classified documents that are intriguingly leaking about on social media, all consolidate to suggest that the Article safeguarding the special status of the state is likely to go — much in line with the election manifesto of the ruling Bharatiya Janta Party (BJP).

While the regional parties like the National Conference (NC), Peoples Democratic Party (PDP), Peoples Conference (PC), Peoples United Front (PUF), and even the Congress are up in arms, what is most conspicuous is the silence of the separatists — otherwise seen as the ‘champions of the Kashmir cause’.

Top separatist leaders like Syed Ali Geelani and Mirwaiz Umar Farooq, who otherwise glorify ‘people sacrificing lives for the Kashmir cause’, are even not willing to sacrifice the comfort of their cosy rooms.

Already under the scanner of the National Investigation Agency for terror links, these Hurriyat leaders seem to have finally realised that Tihar Jail could never be an easy abode for them, or even for their dear ones. 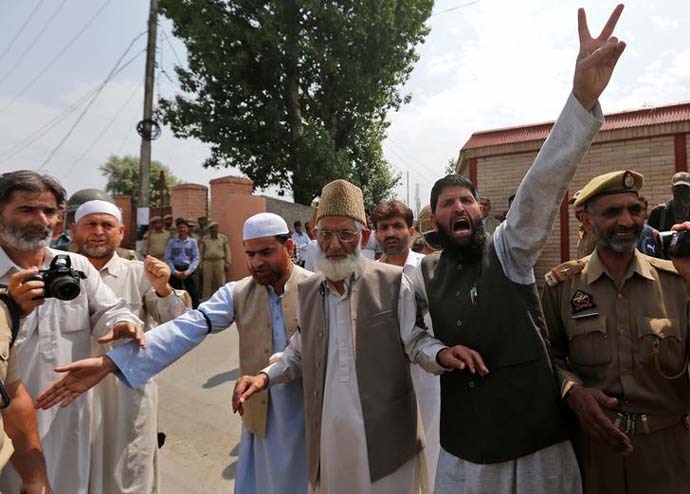 Hiding? Where are the so-called poster boys of the 'Kashmir cause'? (Photo: Reuters)

Their kind of leadership demands that the common man suffer, but they have discovered the joys of life for themselves.

Instead of calling for prolonged unrest in 2016, had the Hurriyat leaders met the all-party delegation from New Delhi, things would have been different.

Well, getting back to the topic — ensuring the exclusive state subject rights to the domiciles of the state, Article 35A is the key instrument of Article 370, which defines the state’s relationship with the Centre.

Barring non-locals from permanently settling in the state, Article 35A gives the state domiciles the exclusive rights to buy immovable property, acquire land, apply for government jobs and much more.

In 1954, Article 35A was added to the Indian Constitution by a Presidential order — a development which the right-wing parties find unwise and thus blame then-PM Jawaharlal Nehru. A promise to honour: The Articles are the bedrock of Kashmir's accession to India. Rocking them means unrest. (Photo: Wikimedia)

Well, logically, the law can be annulled by a fresh Presidential order anytime.

That way, its revocation looks as simple as the signing of a new order.

The BJP’s urge to revoke the special status, on the other hand, seems to be an inspiration from the Rashtriya Swayamsevak Sangh (RSS). The RSS vision document, as accessible on its website, reportedly states: "The State of Jammu & Kashmir, with its oppressive Muslim-majority character, has been a headache for our country ever since Independence... The problem of Kashmir, in fact, is one of our own making, since, keeping in mind its unique demographic character, unlike other states, it has been conferred a special status under Article 370 of the Constitution, even after its total accession with Bharat.”

But then, will revoking the special status really contribute towards restoring sustainable peace in the region, or win back the hearts of people, who already feel alienated?

And, had it been so, would there be a need to beef up security — for almost a warlike preparedness?

In the last five years, public alienation in Kashmir has only festered.

The aggregate voter turnout in the 2019 Parliament elections in the region was merely around 22% as compared to 56% in 2014.

And then, the Articles 370 and 35A don’t bless Kashmir alone — people of Jammu and Ladakh are equally benefitted. Those who think that only Kashmir stands to safeguard its special status are grossly mistaken. In fact, the Jammu region has been so much in support of the issue that it has already been holding protests when needed.

In 2017, following a government order that non-local businessmen could bid for a medical supplies tender in the state, the pharmacists of Jammu had gone for an indefinite strike — till the order was revoked.

The local media in the winter capital have equally contributed to awareness. In its March 6, 2019 edition, a Jammu-based daily published a story, the essence of which could be felt from the headlines: “Kashmir trying to hijack Mahajara Hari Singh's legacy on J&K's special status! Article 35 essentially protects Dogra identity.”

Then, the Jammu region has been fighting for the safeguarding of what Jammu-ites call Dogra pride.

And they have a reason to do so.

For a century, it was Dogra Mahajaras who ruled the state till the princely state acceded to India in 1947.

Then, who else should be acknowledged as the most authentic authority on Jammu and Kashmir’s relations with New Delhi than Dr Karan Singh, the last Dogra prince who was also a witness to the signing of the Instrument of Accession? 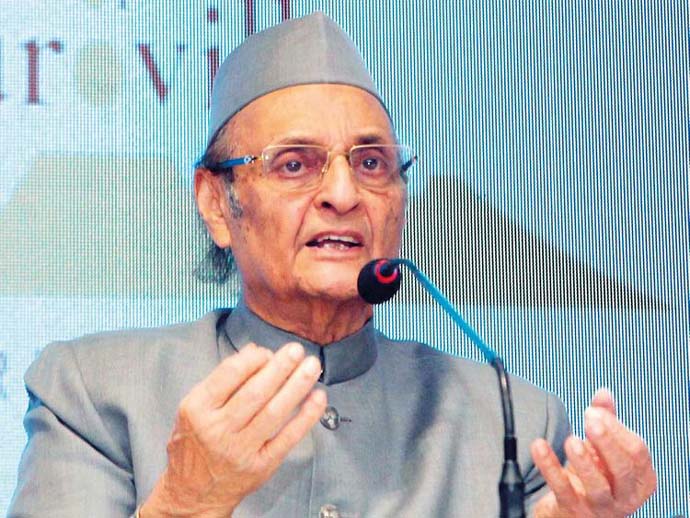 Veteran Congress leader and former Sadr-e-Riyasat, Karan Singh, has advised the government of India to ‘tread a cautious path’ on Articles 35A and 370.

In a recent interview to IANS, Karan Singh — the 88-year-old son of Maharaja Hari Singh, the last ruler of J&K, who acceded to the Union of India — said: “Let me start by saying that the accession is final and irrevocable. Nowhere am I questioning its wajood (existence). This accession has been confirmed and validated by the J&K Constituent Assembly which lies dissolved, so there can be no questions asked about its veracity. Legally, morally and Constitutionally, the state is part of the Indian sovereign. However, on Article 370 and 35A, I would advise extreme caution: tread carefully for there are legal, political, Constitutional and emotional factors involved which should be thoroughly assessed. I think that is a fair warning.”

According to Karan Singh, this is the nature of the relationship between the Centre and the state — and this is where various sensitivities come into the equation.

“When the Instrument of Accession was signed by Bapuji (Maharaja Hari Singh) in Jammu, he signed off on merely three issues. Under this Instrument of Accession, Jammu and Kashmir surrendered only three subjects — which was defence, external affairs and communications — to the Indian state and earned an assurance from India that the people of Jammu and Kashmir through their own constituent Assembly would draft their own constitution, which happened,” he told the IANS.

For the people of Jammu and Kashmir, the Articles guaranteeing special status are not mere pages of a book. I believe Articles 370 and 35A are essentially the articles of faith and a solemn promise of the state’s relationship with New Delhi.

Ironically, it seems that the BJP has learnt no lessons from the past.

Some time back, the same party had issued similar orders for Himachal Pradesh, only to step back in the wake of public outcry. In 2018, as per the Tribune: “Fearing political backlash, the state government has revoked its decision to allow the purchase of land by non-Himachali employees and their children, which was being viewed as a dilution of Section 118 of the Tenancy and Land Reforms Act, 1972.”

And additionally, growing alienation among the locals can only provide a conducive environment for international terror groups like Al Qaeda and the Islamic State, already eyeing the region.

During his recent visit to the US, Pakistani PM Imran Khan spilled the beans, saying around 40,000 terrorists are still hiding in his country’s backyard.

Amid cordial relations with the US, which is struggling for an honourable exit from Afghanistan, Khan would avoid exporting such terror groups to that war-torn country.

Pakistan would, however, try to cash in on any possible public alienation in Kashmir.

Looking at the repercussions of scrapping such crucial laws linked to Kashmir, it should be the collective responsibility of all, and not the mainstream parties alone, to convince New Delhi. 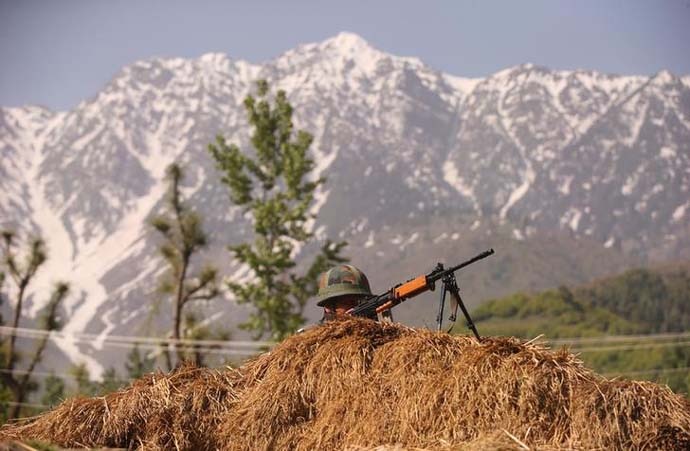 Covered? How many troops can handle the growing jihadi threat in the Valley? (Photo: Reuters)

One would also expect news channels and prime-time anchors to reconsider their hard stand on the issue.

Let’s all remember that the Muslim majority state had acceded to a Hindu majority country, hoping that the secular nation would safeguard their collective interests. But here, a prospective change in law seems to be a design to change the demography.

Breaking legal promises for political interests can never be a recipe for sustainable peace and prosperity.

Such a dare can prove too dear.

Also Read: Kashmir, an RSS laboratory? Abrogation of Article 35A, military build-up and tension suits BJP, but it hurts India

Post your comment
#Amit Shah, #Jammu and Kashmir, #Article 35A, #Article 370
The views and opinions expressed in this article are those of the authors and do not necessarily reflect the official policy or position of DailyO.in or the India Today Group. The writers are solely responsible for any claims arising out of the contents of this article.